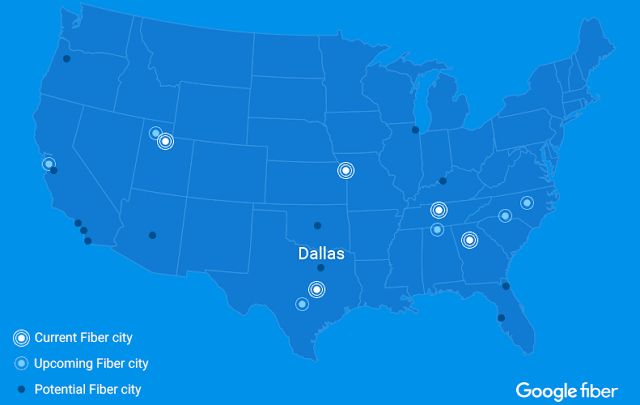 Texas, Google Fiber is potentially headed to another one of your cities.

Google has announced that Dallas is the latest city to be added to its lineup of . The speedy internet service is currently available in Austin and being expanded to San Antonio.

In a blog post, the company cites Dallas as one of the best cities to work in tech, and it hopes that the availability of Fiber will attract more talent to the area. Factors that will affect successfully bringing Fiber to the area includes topography, current infrastructure, and other construction restraints listed in a checklist here.

On its Twitter account, Google clarified that the possibility of bringing Fiber to Dallas include just that specific metropolitan area – not suburbs or its neighboring city, Fort Worth.

Dallas is just one of few large cities (in terms of population) on the Fiber’s list, which includes Chicago, Los Angeles, and Phoenix. The service is live in just five cities: Provo, Nashville, Atlanta, Kansas City, and as mentioned above, Austin – all of which have populations below the one million mark.

Read next: iMessage apps in iOS 10 will have subscriptions, and they'll be a lot like native apps