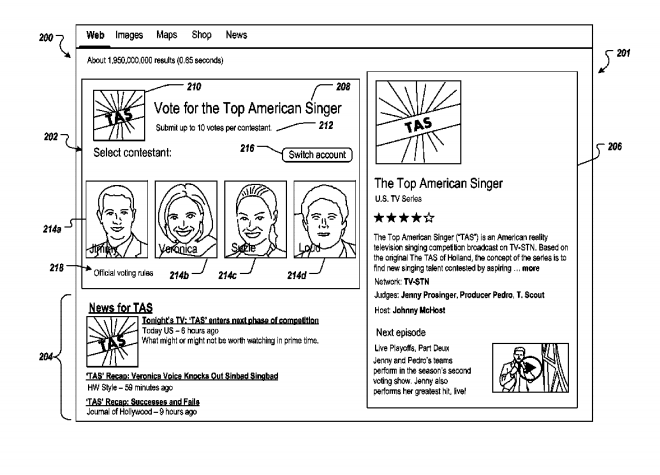 Google tests and abandons many ideas – but each project it takes the time to look at gives you some window into a future world where it’s running increasingly varied aspects of our lives.

Now it’s looking at voting systems. A patent has been filed for a ‘Voter User Interface’ that can be embedded within search results and linked to the social media accounts of relevant “contestants.”

The system, the document says, is intended to understand that the search is related to a particular campaign and serves up the relevant poll accordingly.

The patent notes that the user will have been ‘authenticated,’ implying this could be a secure system intended to facilitate processes like elections.

Of course, it could just be a tool for marketers and users, something like Twitter questions, and mean loads of annoying polls could be clogging up your search results ASAP.

It suggests, for example, that people involved in the poll could also then “distribute content within the social networking service.” Hooray for sharing!

Perhaps it is just a new tool for ‘American Idol’ (although a touch too late, as it’s the show’s last season) but, given how widely Google is used, this could also offer public polling opportunities, whether official or just for research, at an unparalleled scale.

Read next: There's finally a game that makes sense on an Apple Watch