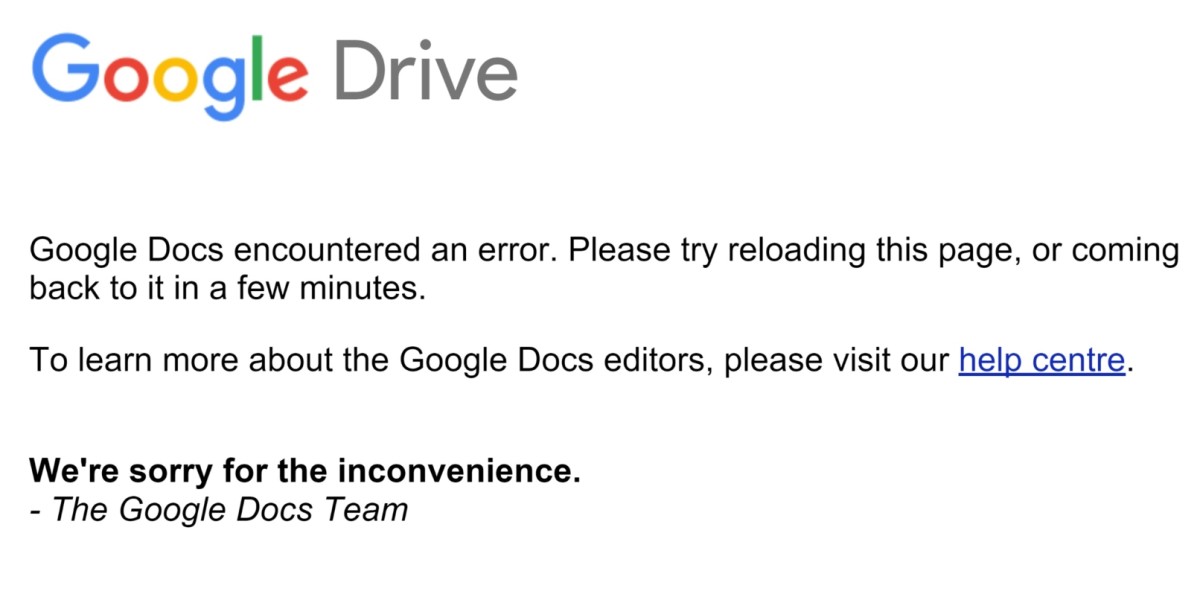 If you use Google’s Drive storage as the hub for all your documents, images and everything else in your digital life, then it’s probably pretty frustrating that problems with the service are preventing some people from accessing any of their files.

Reports of an issue with Drive surfaced on Twitter at around 10:30GMT, but despite the reports, Google’s App Status Dashboard is reporting no problems with the service.

Google Drive seems to be down. A bit hard to work when all the notes I need at the moment are on there.

DownDetector confirms that the service is having problems, however.

Is @googledrive down for anyone else? Why did I think it would be a good idea to keep all my files online? #FML pic.twitter.com/e8igOEvSm1

Naturally, people are sitting out the downtime peacefully on Twitter, trying to find the appropritate GIF to sum up their emotions.

The TNW team in Europe can intermittently access the service, but US team members are completely locked out.

We’ve asked Google for more details and will update as the downtime continues.

Update, 10:58GMT: Google has updated it Status Dashboard to reflect problems across Drive, Docs, Sheets, Slides, Drawings and even Gmail.

Update 2, 12:50GMT: Google updated its service status page at 12:17GMT to say that the problems with Drive should now be resolved, but the issues with Gmail are still shown as ongoing.

Update 3, 14:00GMT: Google updated its status page once again to say that the Gmail issues should now be resolved.

Update 4, January 27: A spokesperson got in touch with the following statement about the downtime:

At Google we recognize that failures are statistically inevitable, and we strive to insulate our users from the effects of failures.  As that did not happen in this instance, we apologize to everyone who was inconvenienced by this event.  Our engineers are conducting a post-mortem investigation to determine how to make our services more resilient to unplanned network failures, and we will do our utmost to continue to make Google service outages notable for their rarity.