Google is reportedly testing a way to let you log in without passwords. 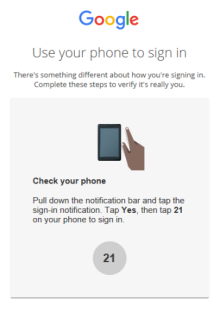 First discovered by Redditor rp1226, the scheme would let you use a phone to sign into your Google account on the desktop. Google confirmed the move to VentureBeat, saying “we’ve invited a small group of users to help test a new way to sign-in to their Google accounts, no password required.”

As rp1226 tells it, you first have to authorize your phone for use as an authentication device. After entering your email in the Google account log-in field, a pop-up message on your phone asks you to authenticate the session. Once you acknowledge the pop-up, the desktop page forwards as if you’ve entered the correct password manually.

This test is reportedly for both iOS and Android, too. While I still think 1Password is a better option, this will undoubtedly make things easier for Google-centric users who like to be logged out between sessions.