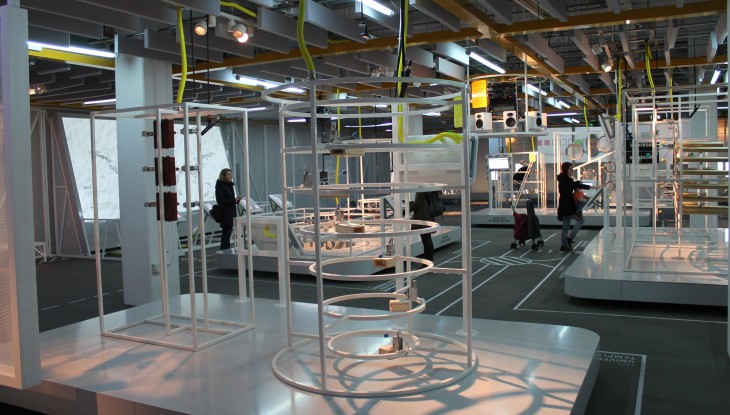 Six months into the year-long experiment, The Next Web ventured forth to get the lowdown on how things have gone so far, and what will likely become of it when the final curtain call arrives this July. And if truth be told, it was actually a good opportunity to experience the exhibition first-hand for ourselves.

But first…what exactly is Web Lab?

Visitors to the free exhibition have five separate experiments to get involved with. Simultaneously, online participants can also “visit” from around the world to interact with the very same installations. It’s about as close as you’ll get to a truly global exhibition. Each Web Lab experiment taps a modern Web technology to explore a specific idea that’s relevant to computer science.

But even if you can’t tell a WebSocket from HTML5 Canvas, Web Lab still demonstrates the power – and potential – of the Internet to in-museum and online visitors.

The five experiments are as follows:

Universal Orchestra encourages people from around the world (including visitors to the museum) to play music together, using real instruments live in the museum or virtual incarnations online. You can choose from a selection of drums, temple blocks, vibraphones, marimbas and more.

The purpose of this experiment is to illustrate the power of WebSockets to enable real-time collaboration. The browser intervenes by taking the streams of notes played by everyone to transform them into pleasant music. So you don’t have to try and stay in-time with others all on your own.

This was perhaps my favorite, and it certainly the most instantly awe-inspiring of all the experiments.

Sketchbots are custom-built robots that snap a photo of you, and then sketch them in sand. This image is one taken of me, and it does look reasonably accurate.

Until fairly recently, drawing images in a standard Web browser wasn’t easy to achieve without additional software. But Sketchbot helps illustrate the latest version of HTML, which includes Canvas. In a nutshell, it means you can draw whatever you like, including dynamically-rendered 3D graphics as you may see in computer games.

Data Tracer is essentially a map that traces where all the world’s online information is physically stored.

You search for an item in Google, say, an image. Then you’ll see lines and dots across the map, as the search query tries to locate the closest matching item(s) and the servers they’re stored on.

Teleporter is a series of Web-enabled periscopes, through which you can see random scenes from around the world, including a 24-hour bakery in the US.

HTML5 and WebGL join forces here to demonstrate how far online video has come in recent times – no additional software is needed for many modern browsers.

In addition to a round-the-clock bakery in North Carolina, you also have a window into the world’s largest miniature model airport in Hamburg, and the Two Oceans Aquarium in Cape Town.

Lab Tag Explorer is a real-time visualisation of all Web Lab visitors from around the world, grouping and categorizing participants accordingly. For example, it can tell you that there are 39 online visitors based in Asia just now.

This experiment showcases V8, an open source JavaScript engine developed by Google, and which is built in to Chrome.

Every visitor to Web Lab receives a Lab Tag (see below) which represents them virtually. This Lab Tag lets visitors store and retrieve everything they create in Web Lab.

The Lab Tag Explorer visualizes all this information, transforming large swathes of data relating to Web  traffic, into pretty attractive Lab Tags that amble across a giant screen.

It’s also worth mentioning the physical Lab Tags, which each visitor to the museum receives when they arrive.

Each Lab Tag has a unique pictogram, which is optically readable by any webcam and gives you access to your Lab creations and artefacts when you go home.

Google first approached the Science Museum about a year before it actually opened, and this is the first time such a project has been attempted. “It is quite a conceptually groundbreaking proposition, we’ve had people all over the world visit us, and people from other museums, and from Google in California and New York,” explains Dave Patten, Head of New Media at the Science Museum.

“We’ve learned lots of stuff from Google having worked with them so closely on this,” he continues. “And I hope they learned a few things from us too, given this is the first time it has put together such an exhibition.”

As for what the future holds for Web Lab, well, this hasn’t been decided yet, but it definitely won’t be continuing in London.

“We’re beginning to talk to Google about what they want to do with it at the end of the year-long phase,” says Patten. “It won’t stay here, as we have something else lined up to replace it. It may go somewhere else, possibly in a modified form, or it might become something completely different. Or, it could be a one-off, and you’ll never get a chance to see this again. I’m not averse to that happening, there’s something quite nice about an exhibition that doesn’t go past its sell-by date, and either you got to see it or you didn’t. There’s some additional value sometimes if you can do that.”

In recent months, Google has continued to push HTML5 with a series of sweet online experiments, such as Jam with Chrome, an experimental Web app that lets you play virtual instruments with friends online. So while the fate of this cool exhibition is yet to be determined, I have a funny feeling it will find a new home somewhere else, probably in the US, and possibly in New York.

With more than 5 million participants so far, including almost 200,000 visitors to the physical exhibits, Google will see this as the perfect opportunity to promote Chrome to the masses. Here’s hoping Web Lab will be coming to a museum near you in the not-too-distant future.