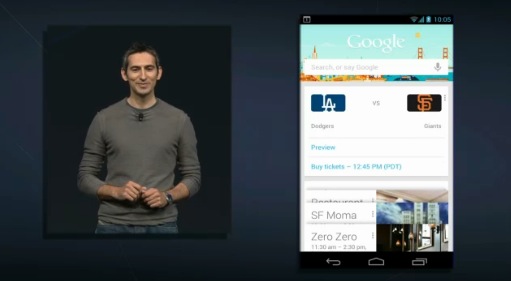 Google is talking about a new world of search at the I/O developer conference. The biggest change is called Google Now. It’s a new generation of semantic-style search.

The entire system is set to give you the information you want, based largely upon your location. Google Now figures out where you commute to work and how. It gives you a faster route if there is a lot of traffic. When you’re at a public transit stop, Google Now tells you when the next one arrives.

The Google Now option can be accessed by tapping on the search box, or swiping up on the screen. You’ll see a custom header that is based on your time of day and your location.

Google is also using its location tracking in order to provide you recommendations when you’re in an area that you don’t travel too very often. As is true with most services from the company, it will get “smarter” the more that you use it.

Google Now and the new mobile search will be available with the release of Android 4.1 in mid-July.

Read next: Google: 600,000 Android apps and games have been installed 20 billion times