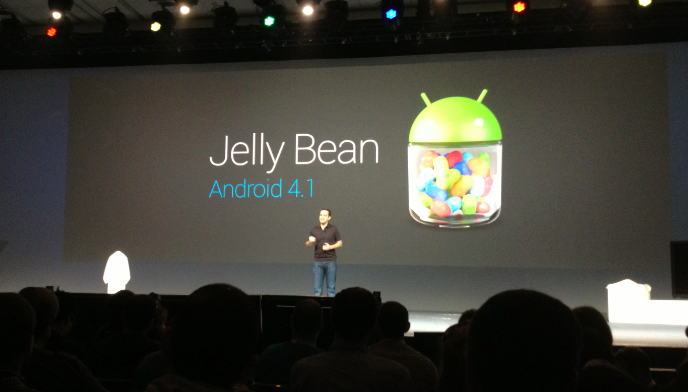 Google announced the latest version of Android, 4.1 today. It is code named Jelly Bean and implements new technology from Google’s Project Butter to enhance performance and visuals, along with a new Search experience.

Jelly Bean is coming to the Galaxy Nexus, Xoom and Nexus S in mid-July. An Android developer preview is also available today.

Google says it has taken the performance stick to Android, improving its touch performance greatly. There has long been an issue with responsiveness on Android devices versus other platforms and Project Butter is out to correct that. The new engine easily allows for a smooth 60 frames-per-second rate to be maintained.

This appears to be an admission by Google that the previous scrolling and navigation performance on Android was…not the best.

In a series of demos Google showed off the fluidity of the new animation system in Jelly Bean. The touch responsiveness was measured by a high speed camera and appeared to be greatly improved. Resizing and placement of widgets has also been quickened and refined.

The new Predictive Keyboard supports voice input and predicts the next word you’re about to type. With Jelly Bean, Google also supports Offline Voice Typing, allowing you to type with your voice even without a data connection.

Google say they’ll be adding Persian, Hindi and Thai support to the keyboard, and will launch English support for voice input first. There is also now support for external Braille adapters.

Two enhancements to Google Beam were also introduced, the ability to pair with a device like an NFC enabled speaker, by tapping it, and the transfer of photos and videos over ‘tap’.

Some new enhancements to Google’s notifications system are also on the horizon for Android 4.1. There are expanded system notifications for Google+, Gmail, phone calls and more. This will allows users to handle more actions right from the notification center without having to launch the apps themselves.

A two-finger pulldown action on the notification wil expand it wider and allow you to close it. Essentially this turns your notification center into an an actionable control panel, giving you the ability to clear out notifications even if they require interaction.

A new search experience will be present in Android 4.1 as well, including a brand new UI, a new, more powerful voice search and a product called “Google Now”.

The new Google Voice Search in Android 4.1 delivers pre-formatted results for people, places and things in various formats from sources like Wikipedia, among others. This places it squarely as a Siri competitor of sorts. It incorporates Google’s Knowledge Graph content and formatting.

Google Now is the second piece to this Siri-competing puzzle. It’s an intelligent system that uses your Google account activity, Google Search history and more to deliver personalized results for you.

If you’re traveling, it might show you the best route based on your travel history or the amount of traffic, suggesting other routes automatically. Google also demonstrated that it could tell you what time you needed to leave for a meeting at a certain time based on transit routing, traffic and your history of travel.

Sports teams were another example used by Google to demonstrate how personalized the Google Now results can be. Based on your search history, Google says it will already know what your favorite teams are and deliver schedules based on time, location and more.

Meanwhile Smart App Updates will soon allow users to update specific aspects of apps, rather than the whole package. This makes updates much quicker and smaller for any app, and will be available on all Gingerbread devices and up.