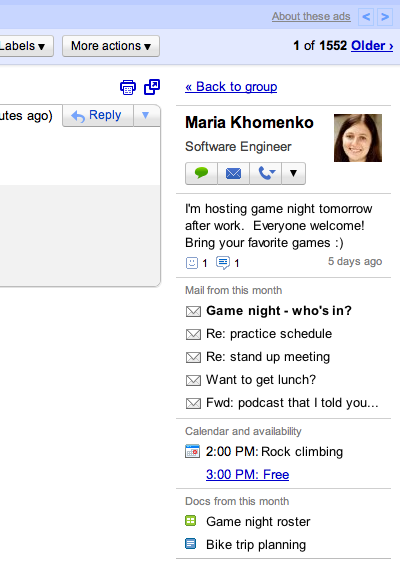 For most of us, Rapportive is the way that we bring context to our email. However, some of you are more interested about the interactions that you’ve had with a person rather than the social networks on which they appear. Seeing and solving that lack of context, Google has just introduced a People Widget for Gmail:

The people widget surfaces content from friends, family and colleagues that is already available to you but may be hard to find and makes it easier to connect with them.

While it’s handy, it does fly directly into the face of similar functions offered by Rapportive and competitor Xobni. Both of these pull context from outside of your network, which is handy if you don’t necessarily know the person with whom you’re emailing. However, the People Widget might prove to be a killer for those times when you are more interested in the work that you’ve already done with a contact.

Relevant calendar functions, Buzz shares and past emails will show, subtracting the necessity to search for nearly as much contextual information as you might have had to find before. What might be difficult is disabling the People Widget in order to continue to use the others. We’ll have to see how that plays out as Google continues to roll out the feature over the next couple of weeks.