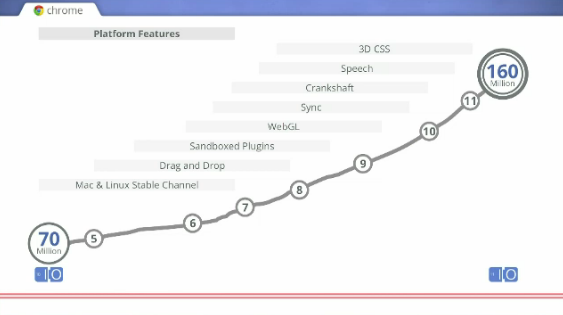 Google’s Senior VP of Chrome, Sundar Pichai took the stage today at Google I/O to present the Chrome Keynote. Exactly a year ago at Google I/O 2010, Google announced that over 70 million active users were using Chrome as their main browser. Today, 160,000,000 people are using Chrome with a whole slew of new features.

At first, Chrome was available only for Windows. Since then it’s now an equal citizen on Linux and Mac platforms with new versions released every 6 weeks. And it’s not just Google backing Chrome; all modern browsers are continuing to invest in HTML5 and hundreds of collaborators are contributing to this ecosystem. To support this community, Google says its developer tools in Chrome have come a long way.

In the latest releases of Chrome, Google demoed its ability to handle the animation load of thousands of fish in WebGL and the speed of the interface needed to make 3D models in TinkerCad. The new Chrome is faster, more robust and is fast becoming a web developer’s number one choice.