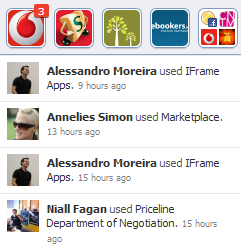 UPDATE: Google confirms that if you’re outside the USA and you set your language to US English in Gmail, this feature may become available to you.

When Google announced it was rolling out the ability to make Google Voice calls within Gmail today, there was the slight caveat that users outside the USA couldn’t use it. Well,  that doesn’t appear to be true; it’s working for me right now in the UK. (UPDATE: to be clear – I did nothing to get this, it was present and active when I logged in).

I have a “Call Phone” option in my Gchat window and clicking it allows me to open the phone keypad. By going to Google Voice I can buy calling credit for what is essentially a basic Google Voice account (to get the full benefits like a phone number, voicemail transcription etc I’d need a valid US phone number). Still, I can perfectly happily call the US for free (I just called our own Alex Wilhelm in Chicago for free) and other countries for cheap rates.

Is this an error? Very possibly. One thing’s for sure, it’s not an official Google Voice rollout. I don’t have a Google Voice phone number so can’t receive calls, and I’d need a US number to ‘upgrade’ so full functionality of Google Voice is still out of reach of those outside the US. When I dialed the number given on caller ID for my outgoing test calls it wouldn’t connect. Still, assuming this isn’t a glitch, we could have at least the ability to make outgoing calls via Google Voice.

I’m using a Gmail theme, hence the odd colours in the screenshot above.

A Google spokesperson told us:
“While this feature launched in the US, If your Gmail account language setting is set to English (US), you might be able to access the feature in some other countries as well.”

Here’s a video of me using the feature from the UK.