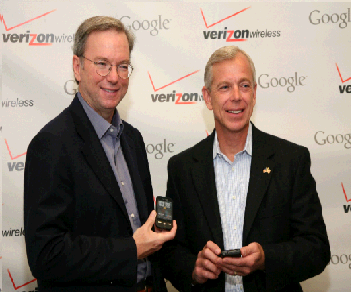 Today in a joint conference call between Goole CEO Eric Schmidt and Verizon CEO Ivan Seidenberg, the two companies proposed what is to be understood as the recommendations of both for internet regulation going forward. And it seems to be what we expected.

The call started with Mr. Schmidt talking about how the FCC should be given the power to regulate wired internet service to enforce net neutrality. What is important is that Google believes the FCC should have the power to stop throttling of certain things, such as if a provider were to slow down BitTorrent traffic.

Mr. Seidenberg, for his announcement, added that immediate regulation for wireless does not make sense given how new it is and how it is still developing. In other words, the two CEOs were leveraging the fact that wireless resources are apparently scarce. The only requirement placed both on wired and wireless service would be one of transparency, which would provide “consumers clear, understandable information about the services they offer and their capabilities.”

Now for the important part. On net neutrality, both companies came down hard against priority access to internet content. But a very important point: a provider could give priority access to a service offered via something aside from what we think of as the open internet. So for example, Verizon could provide a dedicated channel to YouTube through its non-internet networks,though Mr. Schmidt quite adamantly claimed that Google would never do this “under any circumstances. Mr. Schmidt went further as to say that Google’s services would never be accessible from anything other than the open internet.

One questioner made the point that this proposal seemed to leave the potential for an alternative network to the open internet where net neutrality would would not be enforceable. Both Mr. Schmidt and Mr. Seidenberg said that this was not the case. Rather, Mr. Seidenberg said that the proposal would allow network provider services to “stay flexible.” One example he gave was that it would let providers of 3D movies send their services over Verizon’s wires without it having to first go over the internet, which should (as I understand it) give it priority access, though this would not violate net neutrality since it’s not something to do with the internet. It does seem to create the potential for a work-around, though I would like to take both companies at their words that it is no such thing.

Read next: Do these logos confuse you? BSkyB objects to the 'Sky' in Skype