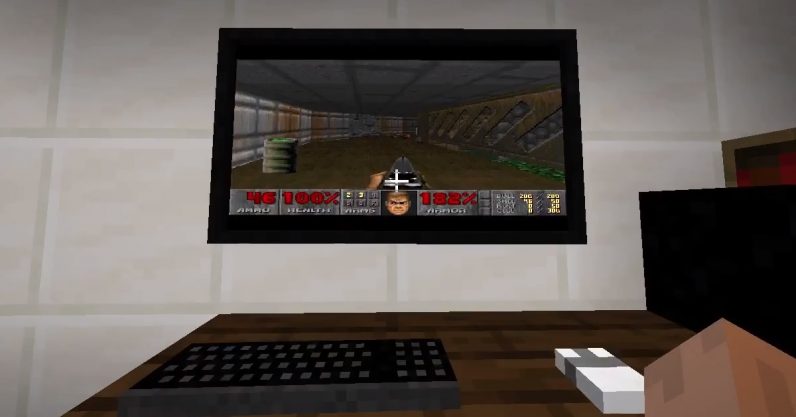 The original Doom, released in 1993, is the game that will outlive us all. Ever since its developers released its source code in 1997, there’s been a devoted effort to get the classic title running on every conceivable device known to mankind. We’ve seen it played just about everywhere, on everything. Here are our picks for the strangest (and most wonderful) things that have been coaxed into running Doom.

Keep in mind that lots of the things that have been proven to run Doom are, in some capacity, computers. The McDonald’s point-of-sale machine, for example, was just a computer that’d been made with a specific purpose in mind, so it wasn’t a huge surprise when some clever devil figured out how to make it run Doom. Same goes for things like printers, cameras, and Apple watches. It’s not that I’m not impressed by them — as someone who’s only ever made Doom run on a gaming PC, I’m impressed by all of it. But some of the things that have been made to run the game are demonstrably weirder than others.

A few years ago, a cabal of indie developers mounted a computer inside a piano, and attached keyboard encoders to the ivories, and thus Doom Piano was born. Each of the piano keys is mapped to a specific action: forward, shoot, interact, etc.

Granted, the sounds you make with it won’t be particularly melodic, if the above video is anything to go by, but that seems a small price to pay to play Doom on a piano. Every implementation on this list is creative, but this is one of those that I look at and say, “Huh, I never would have thought of that.”

I reeeeally want to know the thought process behind this one. While I’ve long since grown accustomed to the idea that people look at everything with a screen and say, “Yeah, I bet I can make Doom run on that,” pregnancy tests barely have a screen to begin with. But apparently the single-color display of the pregnancy test was enough of a screen to support the gameplay, because a programmer made it happen.

Yesterday I had a lot of retweets and reddit posts and such for playing Doom on a pregnancy test.
But as I explained then, it wasn't really PLAYING on a pregnancy test, it was just a video being played back, not an interactive game.

Well, now it is. It's Pregnancy Test Doom! pic.twitter.com/Nrjyq07EVv

Note that this looks so improbable that several of the people who first saw it didn’t believe it could be real. And to be clear, programmer Foone Turing had to gut and replace most of the tech inside the pregnancy test. But still, the fact that it was made to support Doom at all, and the fact that it’s still recognizably Doom on that little screen, is doubly impressive.

If it’s a screen, it can support games — that might as well be the tagline of this article. The Touch Bar on the MacBook Pro isn’t much of a screen, but it’ll do — and Doom isn’t the only game it can run. A very small version of Pac-Man has been made to run on the Touch Bar. That’s great and all, but here’s Doom smushed into this strip of a screen.

Now, you’d think the Touch Bar would be perfect for holding, say, a game HUD. And that is one of the things developer Adam Bell also did, as you can see from Bryan’s original article. That is substantially less squashed and more useful. But the fact that you can still squash the entirety of the game into this screen and still be able to play it is surely a testament to just how well we all know Doom by now.

If you thought the Touch Bar was too small of a screen to conceivably run Doom, you ain’t seen nothing yet — and unless you squint really hard at this next entry, you ain’t gonna see nothing at all. The screen this time is in the Optimus Maximus keyboard, the keys of which are tiny little displays that can be adapted to show different keyboard layouts. It’s not exactly a common item, but by now you know what to say: if it has a screen, it must be made to run Doom.

I hope you didn’t need to have your eyes checked. I’m all for putting Doom on any screen, but at 48×48 pixels, this is about as small a screen as you’ll probably be able to find that can still recognizably show Doom. It’s not exactly optimized either, and looks pretty rough to play, but damn it, it can be done, it has been done, and that’s all that matters.

This one is cool just by virtue of what it took to make it happen: this mod essentially lets you build a functioning VirtualBox PC within Minecraft. It makes sense that one of the first things someone would do with this technology is run Doom on it. I mean, at this point, I would be disappointed if that wasn’t the first impulse — but it was.

I played DOOM in Minecraft with VMComputers mod. from Minecraft

It’s so odd that, out of all the entries on this list, this one is the one in which the entire game is actually visible and easy to play. No banging on discordant ivories, no squinting at miniscule keyboard keys — just looking at a screen within a screen on Minecraft. Now I need to see if someone can get Minecraft to run on Minecraft, and then see someone playing Doom on that.

Have you ever seen something weirder running Doom? Let me know, because I’m sure there’s something out there that can top what I’ve seen. If you’re curious to see what else can run Doom, check out the It Runs Doom Tumblr, and the It Runs Doom subreddit, both of which were very helpful when I was falling down the Doom rabbit ho– I mean, working on this article.

Read next: How giving product features away for free helped my startup grow during COVID-19