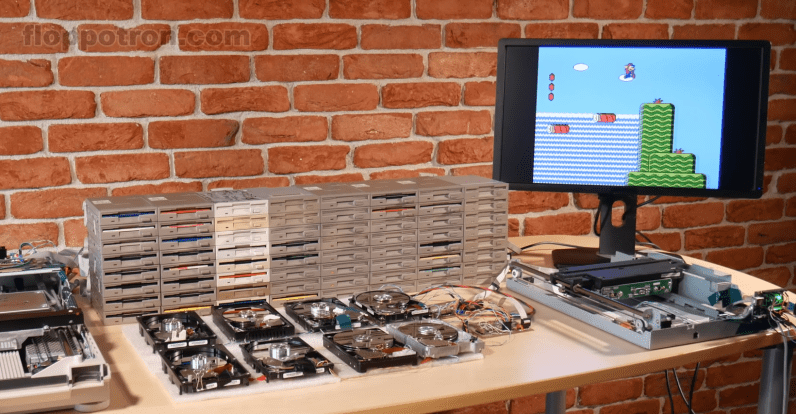 March 10, AKA MAR10 day, is one of the most important holidays in pop culture, honoring Nintendo‘s legendary gaming mascot. It’s a day I’ll normally revisit some of my favorite Mario titles or listen to some classic tunes from the series. And what better way to listen to retro music than through the Floppotron, an instrument made out of dozens of floppy drives and other old computer hardware?

Okay, so Mario may never have technically been a PC game (officially, anyway), but the buzzing sounds of a floppy drive invoke a similar sense of nostalgia. Besides, the multitude of drives manages to somehow create a good physical analog for 8 and 16-bit chiptunes.

The Floppotron was created by Pawel Zadrożniak, who has been refining the contraption over the years to cover a wider breadth of sounds. Other amazing covers include Beat It by Michael Jackson and We Are the Champions by Queen. For more on how the Floppotron works, you can check out Zadrożniak’s site here.

And as someone who’s a bit of a videogame cover nerd, here are some other great Mario music covers:

Read next: AI studies our photos to prove that nature makes us happy