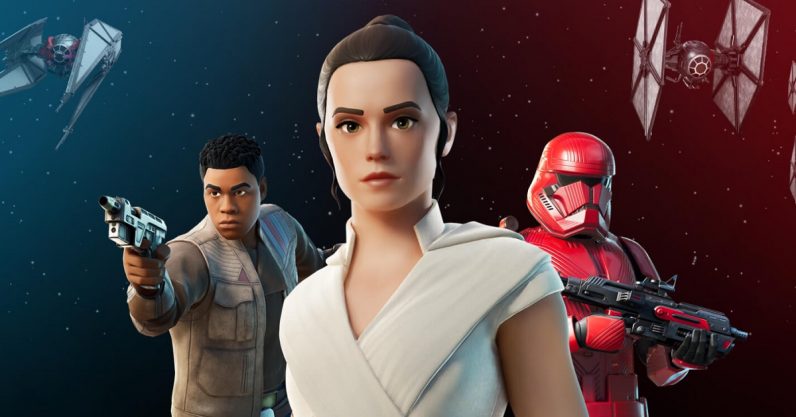 If you’re going to see the new Star Wars movie this weekend, there’s a certain reference you might not understand — unless you played Fortnite‘s promotional Star Wars tie-in event, apparently.

Just a warning, in case it wasn’t obvious, I’m going to be spoiling the opening crawl of Rise of Skywalker. So if you want to go into the film completely unspoiled, click off now. I’m serious.

This is your *SPOILER* warning.

In the opening crawl of Rise of Skywalker, we’re told that the galaxy has heard a mysterious broadcast from the long-dead Emperor Palpatine threatening revenge. You don’t hear this broadcast in the movie, and this is enough context to be getting on with.

That said, you could hear the broadcast in Fortnite if you joined the special weekend Star Wars event.

Even if you heard the broadcast, it probably wouldn’t add much to your understanding or enjoyment of the movie. It’s a voice that sounds a lot like Ian McDiarmid’s Palpatine spouting sinister mumbo jumbo about revenge, victory, and how “the Day of the Sith” is at hand. (Didn’t the revenge of the Sith happen some six movies ago, buddy? Do try and keep up.) I’m with Polygon writer Owen S. Good, who speculates it was probably something that was recorded for the movie and then fished from the cutting room floor to spruce up the event.

This is one of those stories that feels like it sums up the whole year for me: Fortnite being an unlikely-but-pivotal part of the cultural zeitgeist one more time. I wonder if this was secretly the reason for Epic and Disney both going so far out of their way to plug this relatively unexciting tie-in event — it even got a promo at the Game Awards, which I’ll remind you was also how the new Xbox was revealed. And given how many people play Fortnite, it probably wasn’t a stretch to say that basically the entire galaxy heard the message.

Event-goers also got to see about a minute of footage from Rise of Skywalker. Again, nothing earth-shattering: just Finn, Rey, and Poe being the world’s best goshdarn RPG party in space. Players also received lightsabers, which sounds like a whole lot more fun to me.