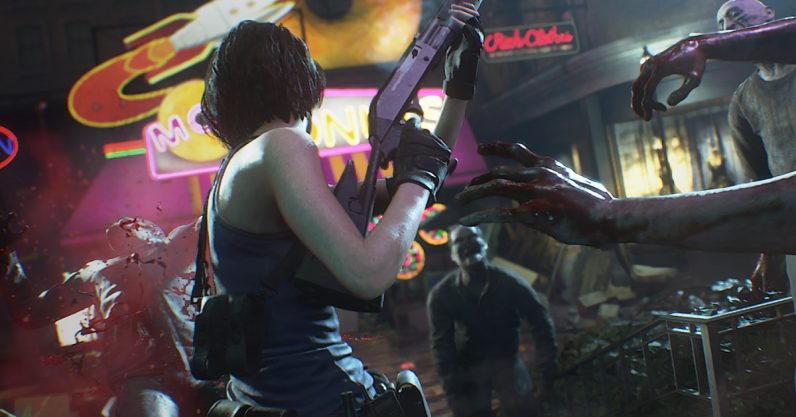 I love it when rumors not only turn out to be true, but surpass my preconceived notions. Yes, the Resident Evil 3 Remake is real, and it’ll be coming out next spring. What’s more, Capcom have cleverly packaged it with the Resident Evil multiplayer game it’d also been making. I’m calling it now: that will turn out to have been one of the smartest dev decisions of the year.

The trailer debuted today during Sony’s State of Play show. It’s mostly cinematic first-person, but it shows a little bit of actual gameplay that implies it’s going to be that RE4 over-the-shoulder third-person shooting. It follows Jill Valentine, who, as I’d hoped, appears to have traded her tube top and skirt for a Lara Croft-ish blue tank top and actual pants.

The trailer also shows a sneak preview of what it’s going to be like to be stalked by this game‘s trademark monster, the hideous Nemesis. For the uninitiated: if you thought Mr. X was a goddamned nightmare, just wait until this seven-foot murder beast is literally sprinting after you with a bazooka on one of his arms. He’s not explicitly shown doing this in the trailer, but here’s a screenshot:

From what I can tell from the preview, the game will delve deeper into how Raccoon City went to shit so quickly and how the living population reacted. The town we saw in REmake 2 was desolate, with only a few survivors scraping away at the remnants when Leon and Claire rolled up. Jill, meanwhile, is there when the streets are full of the undead, and the living are desperate to escape.

I spotted a few differences already. Nemesis is on the hunt for S.T.A.R.S. members, the Raccoon City elite police squad who discovered the original Spencer mansion outbreak. Given Chris, Rebecca, and Barry got the hell out of dodge, the only S.T.A.R.S. members left are Jill and Brad Vickers, who fans will recognize from his signature yellow vest. He appears to be marginally less useless this time, helping Jill and giving her the lowdown on Nemesis.

Here’s the major difference, though: REmake 3 will have a multiplayer game attached. That’s right, it turns out that Project Resistance thing we heard about at the Tokyo Game Show is going to come in the same package, and is now called Resident Evil Resistance. This 4-v-1 mode will see a group of survivors try to outwit a single mastermind who’s setting traps and controlling bioweapons in order to trap them. It appears to be capitalizing on the asymmetric multiplayer trend seen in Dead by Daylight and Friday the 13th.

I’ll admit, when I first heard about Resistance, I was afraid it was going to be another Operation Raccoon City — a mindless, low-effort shooter wearing Resident Evil like a disguise. It appears to be a bit better than that — though, from what I’ve seen, they’re missing a huge chance to borderline-remake RE: Outbreak by including that game‘s characters as survivors. Also, having a Resident Evil 3 Remake as a single-player campaign has probably gained this game more goodwill in a single day than a six-month dedicated advertising campaign.

Resident Evil 3 and Resistance will release on April 3, 2020.

Read next: Double eureka: Breakthroughs could lead to quantum 'FM radio' and the end of noise