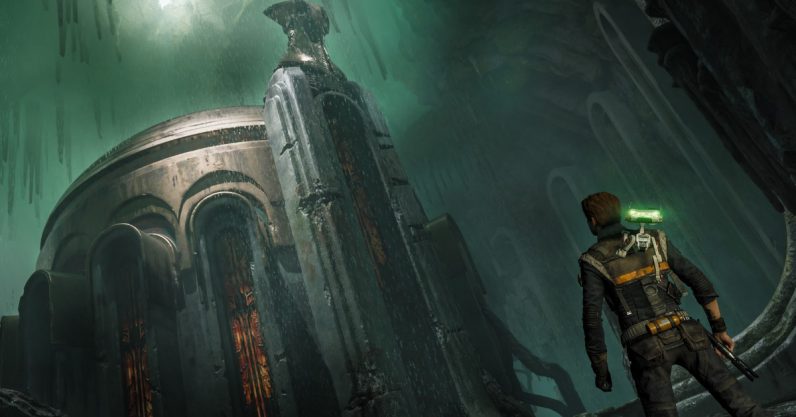 While playing the most recent piece of Star Wars media, Electronic Arts’ Jedi: Fallen Order, I’m getting some definite Lara Croft vibes. And I’m very much okay with that.

Jedi: Fallen Order is perhaps the first true attempt by EA to produce a single-player Star Wars game. After years of hearing about such games getting canned in favor of two Battlefront titles, playing this game feels like an achievement in and of itself. I’ve been playing it off-and-on ever since it came out.

Keep in mind I haven’t finished the game — Death Stranding and Pokémon Sword & Shield exist, and I only have so many hours in the day. But I’ve thoroughly enjoyed what I’ve seen so far. The game takes inspiration from the likes of Dark Souls and a touch of Metroidvania exploration. But so far, the biggest inspiration I’m feeling is some good old Tomb Raider.

To set the scene, protagonist Cal Kestis is a former Jedi Padawan whose master was killed by Order 66. He’s trying to keep his head down and not attract the attention of the Empire’s Inquisitorial death squads, until he slips and uses the Force in a moment of panic. Within hours, he finds himself on a quest to explore ancient ruins across the galaxy, looking for a way to rebuild the fallen Jedi order using the tech of an ancient civilization.

Despite that description, I was not expecting to be reminded of Tomb Raider when I fired up the game. Yet the first time I piloted Cal as he shimmied up the side of a bare wall, I couldn’t help but think, “This feels familiar.” I have a feeling the closer influence is Naughty Dog’s Uncharted series, but let’s be real: the climbing, the treasure plundering, the vast stretches of quiet exploration… that all started with Tomb Raider.

Trouble is, you’d barely know it because the recent Tomb Raider reboot games, Shadow in particular, have gone so far into the Looty Shooty Fresh ‘N Fruity genre that tomb raiding feels like a side dish, a garnish at best. Playing Jedi: Fallen Order feels almost more like a proper Tomb Raider adventure than most of Lara Croft’s recent adventures — right down to the battles with giant monsters and ancient temple guardians.

Considering the movies have never really lingered overmuch on the ancient history of the galaxy, the games have been very preoccupied with it. It’s been a major part of both Knights of the Old Republic games and the Old Republic MMO. And Fallen Order barely even makes a pretense at being interested in the modern Star Wars setting. Within an hour of first taking control of Cal, players are landing on a planet with an ancient temple to explore.

There is some semblance of a story based around the current events in the lore — the Jedi purge and the attempts on the part of both good and bad guys to find survivors like Cal — but it barely feels like adequate justification to get Cal investigating the remnants of an ancient civilization. What connection does that have to the plight of modern Light Side-aligned Force users? I certainly couldn’t tell you — and I very much do not care.

Fallen Order is by no means a masterpiece — I’ve never had this many problems with texture pop-in on a game, ever. Also, for a game that puts so much emphasis on climbing, I died way too many times because the game failed to read me as being “attached” to a piece of flat terrain and sent me tumbling off a cliff.

But still, it scratches my long-untended itch for a game about delving into ancient temples, uncovering lost treasure. I really was not expecting it to, but I’m so glad it’s here.