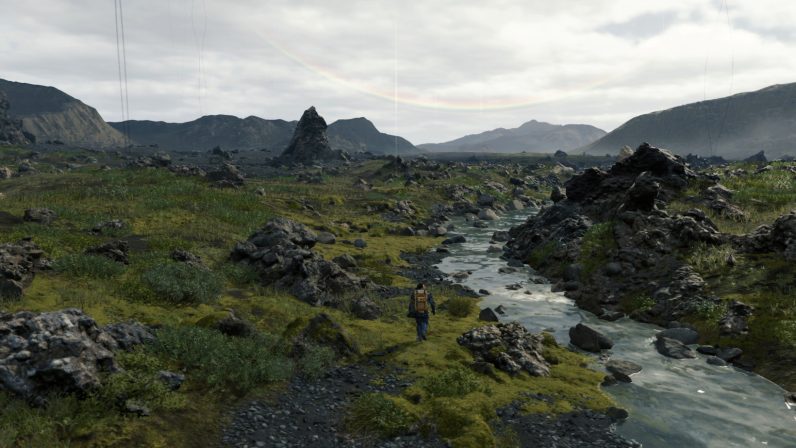 Death Stranding is easily one of the most highly-anticipated games of the year, maybe even of this whole console generation — it was mine, for sure. The PlayStation 4 version comes out next week, on November 8, with a PC release following next summer. Sony provided us with an early review code, I’ve finished it, and I haven’t felt so conflicted about a game in a long time.

This is the first game from iconic game designer Hideo Kojima since his controversial public breakup with Japanese publisher Konami. It’s his first ever independently produced title. Most of the high expectations associated with this game come from the fact that this is the first time Kojima has gotten complete creative freedom to realize his vision. Sure, the project is bankrolled by Sony, but it’s obvious that they’ve allowed Kojima to make whatever he wants. Which, it seems, turned out to be a double edged sword.

Ever since the project was first unveiled, back in 2016, it’s been shrouded in equal measures of mystery and hype.. The reveal trailer, showing The Walking Dead actor Norman Reedus crawling naked on a beach, holding a baby, immediately sent fans into a frenzy of speculation, which hasn’t slowed down since. As Kojima dropped more trailers, the theories about the game‘s story grew wilder, and it wasn’t until recently that we got an idea of what you actually do in Death Stranding.

Turns out, it’s a game about delivering packages.

You play as Sam Porter Bridges, who is in turn played by Reedus. Sam, the world’s most famous porter, finds himself in the United States in the near-future which is now known as “The United Cities of America”, or the UCA. The nation has been torn apart by an apocalypse – the titular Death Stranding – and it’s up to Sam to reconnect the scattered country by walking from city to city, delivering packages.

I realize how weird that sounds, but it’s not even close to how abstruse and down-right bizarre Death Stranding actually gets. For instance; Sam is carrying around a baby on his belly, dubbed BB28, who is connected to ‘the other side’ (think: The Upside Down from Stranger Things), which allows Sam to sense ‘Beached Things’ (BTs). BTs are monster spilling over into this realm, causing ‘Timefall’, which is a sort of rain that ages everything it touches, including your packages.

The rabbit hole goes way deeper, with famous actors and directors like Mads Mikkelsen, Guillermo Del Toro, and Nicolas Winding Refn playing major roles in the story. And as if that’s not weird enough, their characters have names like Heartman, Deadman, and Die Hard-man. A big part of Death Stranding is uncovering how this all fits together. If you’re like me and hate spoilers, I’ll keep it vague, but I can assure you that this is a trip. A wild convoluted trip, unlike anything you’ve ever seen before in a video game.

The actual gameplay in Death Stranding is about as atypical as its story. Kojima wasn’t exaggerating when he said that Death Stranding doesn’t fit into a traditional genre. It mixes familiar elements of stealth and open-world games, but it’s mainly about navigating insanely harsh terrain using tools, like ladders and climbing ropes.

Initially you only have those two aforementioned tools, which makes for a rough start. The delivery routes are long, walking is slow and gets even slower when you’re bogged down with a bunch of heavy parcels on your back.

You’ll have to carefully plan your route and consider how much stuff you’re bringing with you (both tools and packages) on each haul. The more stuff you put on Sam’s back, the faster he topples over, damaging his cargo as he falls. The combination of these mechanics becomes frustrating at times. Especially when it’s pouring Timefall, and you receive damage for every second you spend in the downpour.

Along with Timefall, come the Beached Things – the main enemy you’ll encounter in Death Stranding. Certain zones on the map are filled with these invisible monsters, and the only way to avoid them is walking slowly and holding your breath. Once they spot you, you’ll be dragged underground and forced to face huge monsters that are tough to beat. You’ll want to avoid these BTs as much as you can, but the game’s story will purposefully send you through some of these BT-infested areas, which leads to some of the most challenging moments in the game.

Fortunately, you get a ton of tools to deal with all these frustrating moments. It starts with simple stuff, like a postbox you can use to store your packages in while you’re on the go, or a watchtower you can use to scope out the area. I won’t spoil the stuff you find later on, but the game has a good habit of giving you cool toys to play with every time you are done dealing with a certain limitation.

The most fun you’ll have in Death Stranding is when you get those new tools. Being able to easily finish a delivery route you were struggling with earlier is a great feeling, and the game is filled with those moments. All the challenges from the beginning of the game become trivial later on. It makes you feel like the best damn delivery person in the world, who is single-handedly rebuilding the US after the apocalypse.

Single-handedly doesn’t mean you’re all alone though. Sure, you’re still walking around these massive environments on your own, but you’re always connected to other players via the ‘social strand system’. Which means that every piece of equipment you place, every package you drop, everything, can be used by other players. You can donate materials, use other people’s ladders, leave signs, and so on.

The social strand system is a great concept that works really well. Other people’s signs will help you anticipate dangerous routes, their postboxes stock you up with the right equipment before rough patches, and their ladders help you reach areas that are otherwise impossible to reach. It’s an interesting mechanic that fits neatly with the rest of the game.

You can only use other people’s stuff once you’ve connected it to the network, which caused some of my least favorite moments in Death Stranding. It’s the moments where you are on your own, without all your tools at your disposal, navigating the roughest terrains in the harshest conditions, that Death Stranding is at its worst.

It’s just not fun to walk for half an hour with fragile cargo on your back, avoiding the deadly BTs, while running out of equipment and stamina. The last third of the game is filled with a bunch of these missions, which is a bummer. It felt like a slog, especially because some of these missions don’t add anything to the story and just feel like busywork. I had to put on a podcast to keep myself entertained, no bueno.

It’s obvious that Kojima wanted to make these moments feel like a slog, and it’s done successfully, but it doesn’t respect the player’s time. It took me over seventy hours to finish Death Stranding and about twenty of those are not that enjoyable. This is where you can clearly see that Kojima needs an editor. For the most part it’s great that he got total freedom to make whatever he wanted, but I can’t help but feel that Death Stranding would’ve been even better if someone had told him to reign it in a bit.

Even after 70 hours I’m not entirely sure how I feel about Death Stranding. It’s definitely not going to be for everyone. The gameplay is tedious at times, the story is convoluted, and it’s just too experimental to be widely enjoyed. But if you’re willing to look past that, there is a game unlike any other. And don’t get me wrong, I’ve thoroughly enjoyed the majority of it.

Death Stranding will have to sell a lot of copies to become profitable, and I bet a bunch of those will get returned by unsuspecting players who just can’t deal with the nontraditional nature of this title. Conversely, those who are completely on board with whatever Kojima produces will love this game to death. And judging by the hype for this title, that’s going to be millions and millions of people. Just take a look at the game’s subreddit to see what I mean.

Either way, I’m happy Death Stranding is finally here and I can’t wait to see how the rest of the world will react to this undeniable milestone in gaming history.