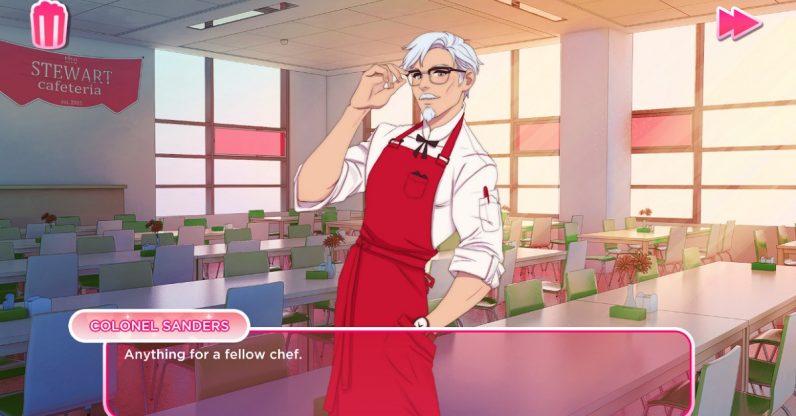 So KFC apparently has its own dating sim now. And I want it like I want my next helping of actual Kentucky Fried Chicken: in my face now.

You and The Colonel🤩…

The game, titled I Love You Colonel Sanders! A Finger Lickin’ Good Dating Simulator (wow, that’s more of a mouthful than an Extra Crispy drumstick), is an official KFC product, according to a statement they gave Polygon. It was developed by Psyop, a game developer that apparently specializes in licensed marketing. This isn’t the first time KFC has made overtures to the gaming world: see also, the KFC Gaming Twitter (“Finger Clickin’ Good”). I’m going to guess the same brains in the marketing department were behind both that and this game.

In ILYCS!AFLGDS, you play a culinary student studying alongside the presumably soon-to-be famous Colonel Sanders. The Colonel looks as attractive and friendly as ever and, in the grand tradition of dating sims, you have the option of wooing him — which you will because, you know, why pass up that kind of opportunity? The game also has a collection of other dating sim staple characters, including a dog who’s apparently one of your culinary school professors.

In case you needed more enticement (which, let’s be real here, you don’t), the game also features positively drool-worthy illustrations of KFC‘s menu items, with special attention being paid to the fried chicken.

Admittedly, when I first heard about this, my mind immediately conjured up a memory from my teenage years. Did anyone besides me watch The Nanny? In that show, the titular character (played by Fran Drescher) is one day out from marrying her paramour, when her mother Sylvia comes to fetch her for the obligatory 24 hour “bad luck” separation. When Fran protests that they have two more minutes before the deadline, her mother says “There’s only one man who can please a woman in two minutes: Colonel Sanders.”

So naturally, the first thought when my editor slid this assignment over to my desk was, “Gee, I wonder if Sylvia was right.”

I’m trying not to examine the fact that, far from a simple avatar of a franchise, Colonel Harland Sanders was a real person who might not be cool with his visage being used this way were he still among the living. Though I suppose I don’t feel as weird about it as I would for, say, a game in which you date Wendy’s namesake, who is very much alive.

And hey, this isn’t the worst game-based-around-a-fast-food-mascot to ever exist… I mean, Sneak King still exists.

According to the Steam page, the game will be available for free on September 24.

Read next: Pixel 4 video leaks confirm 90Hz display and the return of the 'panda' color