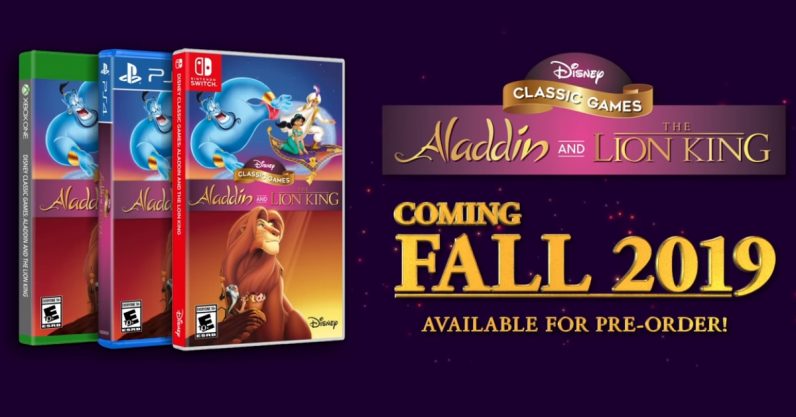 A new trailer confirms Disney will be re-releasing remastered versions of its cult classic licensed games, Lion King and Aladdin. If you’re wondering why the company’s bothering to bring them back now — yeah, that’s an easy answer.

Images leaked earlier this week showed the box art for the game collection and now, thanks to a trailer from developer Nighthawk Interactive, we know more about what the games will have and what platforms we’ll be able to play them on. Both games will be included in the Disney Classic Games Collection, which arrive on PS4, Xbox One, Switch, and Steam. As for when they’ll be released, all we know is “Fall.”

I was kind of wondering what would motivate Disney to re-release these games after all these years? What event this year would prompt Disney to revisit these older properties?

Yeah, that’s right, Aladdin and The Lion King were the 2019 cornerstones of Disney‘s continued efforts to remake its animated classics as live-action features. I’ve seen them both — nothing to write home about. Aladdin had some good remakes of the music but that’s about it. But still, the DVDs will probably be coming out later this year.

Aladdin‘s is due out in September, with The Lion King probably following a few months later — in other words, this fall, coincidentally around the same time the games are released.

That’s not me using my cynical voice either. Any excuse to get classics such as these re-released is fine by me. But I’m pretty sure this is Disney attempting to simultaneously market to the kiddies and appeal to the nostalgia of the original viewers in a way the remake films might not.

Still, the games appear to have gotten more than just a new coat of digital paint. The collection includes multiple versions of the games, which each released on the Sega Genesis and Game Boy among other consoles. Each game will have a rewind feature, allowing you to fix your mistakes Prince of Persia-style. There are also a plethora of behind-the-scenes features — heck, it looks even more like a Disney DVD now than ever.

If you were a fan of the originals (and everyone was, be honest now), look forward to seeing the new versions sometime this fall.