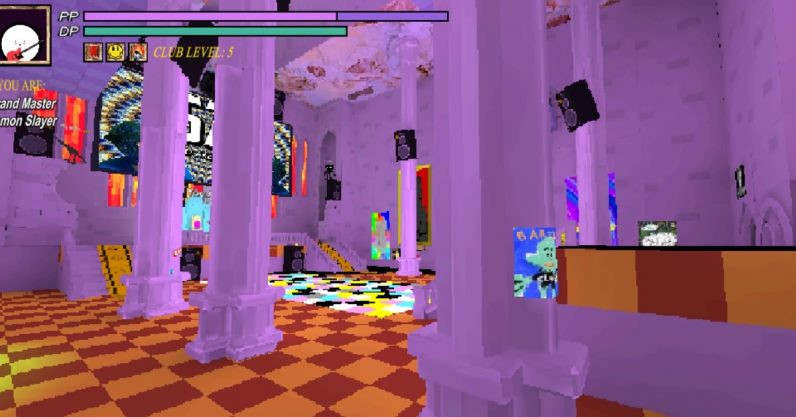 Sometimes I come into work and my European colleagues have had a relatively quiet day. Other days I come in and someone tells me they’ve spotted something so bizarre, so wonderful that I immediately think, “I gotta check this shit out.” In this case, it was my boss telling me he’d just found out that the developers of The Stanley Parable had made a 90s-esque browser MMO set in a dance club.

It’s simply titled The Club. If you’d told me this time yesterday that I’d be checking out a game like this, I’d have told you to lay off the MDMA and let me get back to guzzling my coffee.

The game is developed by Crows Crows Crows, the studio founded by William Pugh, one of the designers behind popular ennui simulator The Stanley Parable. The studio described it in the announcement newsletter as “a mission-less, non-competitive, online music listening game (it’s an MMO).” And it’s hard to argue with those semantics.

Curiosity appropriately piqued, I entered the game — which can, by Crows’ words, be played in any browser for free — and immediately had to turn down my volume. Being set in a nightclub, the musical thuds I could hear even from the starting area set my head pounding. Serves me right for going clubbing with a sinus infection.

The titular Club is an eye-watering combination of flashing lights and pink walls bedecked with posters in searing color. It looks like something someone threw up after gorging themselves on Starbursts and Pixi Stix. The music is apparently a community project, having been cobbled together using a sample pack of club beats. Strangely enough, I couldn’t tell you the difference between it and actual club music, but I do know my back teeth haven’t stopped vibrating.

There are a few other areas you can explore, particularly a sketchy-looking backyard area that reminds me of some very uncomfortable college parties. The dingy bathroom also allows you to look at your avatar, if that’s a thing you like to do. There’s a primitive talking tool that lets you spout phrases at your fellow club-goers, from simple hellos to “I know the owner of this place.” It’s a bizarre, oddly absorbing 90s throwback, and I can’t tell if I love it or am just hypnotized by the spectacle.

I don’t often find myself a truly odd duck of a game, but The Club certainly is that. Check it out here, if you like.

Read next: Scientists at an aquarium just figured out how to save Florida's 'Great Barrier Reef'