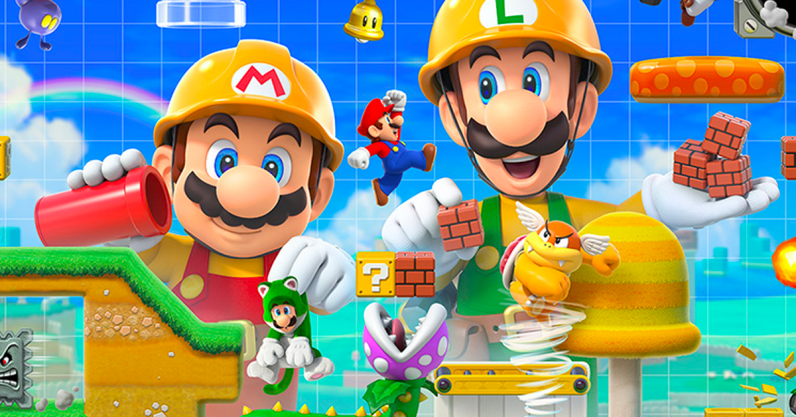 Four years ago, Nintendo did something brave and uncharacteristic: it let players create their own Mario levels, with Super Mario Maker for the Wii U. Super Mario Maker was arguably one of the most interesting titles to come out on the Wii U, and I’m happy to report its sequel is an improvement in almost every sense.

The Mario Maker series does what it says on the box: it lets you create and share Mario levels, and play those that other people made and shared. You use most of the objects and items from the classic platform games, and you can switch between the Mario 1, 3, World, and New tilesets (or styles as Nintendo calls them) on the fly. Super Mario Maker 2 adds the tileset from Super Mario 3D World, which comes with its own sets of objects and power-ups.

The tools in Super Mario Maker are dead-simple, yet incredible deep. You simply drag and drop items onto the canvas – using the Switch’s touchscreen in handheld mode or a cursor when your Switch is docked – and off you go. Unlike the first title, you have (almost) all tools available from the start, so you can jump in immediately and build to your heart’s content.

The game has a simple tutorial, and an extensive in-game manual that teaches you everything from the absolute basics to advanced level design concepts like pacing and player behavior. Now, I’m not creative enough to ever make something worth playing, but that’s on me, not the game. The tools are accessible, the information is vast, and iterating is as easy as it can be.

A big new addition in Super Mario Maker 2 is the Story Mode. The setup/premise is pretty simple: Peach’s Castle gets demolished and you have to complete levels and collect coins to help fund the repairs. Don’t expect a huge, elaborate story with tons of cut scenes here. It’s nothing fancy in that regard, but it is a very big collection of levels made by the bright minds at Nintendo that are a perfect source of inspiration for your career as a Mario … maker.

Most of the other new additions are focused on (online) multiplayer. You can build and play levels together, but the game is currently plagued by server issues. I’m not a big fan of multiplayer Mario in the first place, so I could do without it. Nintendo still doesn’t seem to get how people use online functionality in games, so there is no way to easily play levels from people on your friend list. If you want to play your friends’ levels, you’ll have to manually add them first by entering their code. Smh.

Speaking of Nintendo and online: realize that you’ll need a Nintendo Switch Online subscription to up- and download levels. The service costs a meagre twenty bucks per year, so it’s not prohibitively expensive, but it is something worth considering before plunging in.

A glaring omission in Super Mario Maker 2 is the first game’s stellar amiibo support. Amiibo are little collectible statuettes of Nintendo characters that have an NFC chip in them. The first game let you scan your figures to unlock their costumes, allowing you to add stuff like Sonic and Mega Man suits to your levels. I thought this was a really cool feature and I’m bummed Nintendo decided to scrap it.

Amiibo stuff aside, I love Super Mario Maker 2 to bits. The new building blocks greatly expand the possibilities for makers, the story mode is a wonderful source for inspiration, and the Switch’s portability makes it the perfect platform to quickly run some levels during your commute. I can’t wait to see how the community uses all the new tools at their disposal, and I’m sure the future of Mario Maker will be nothing short of amazing.

Read next: 'User in yer face' is an online museum of design horrors