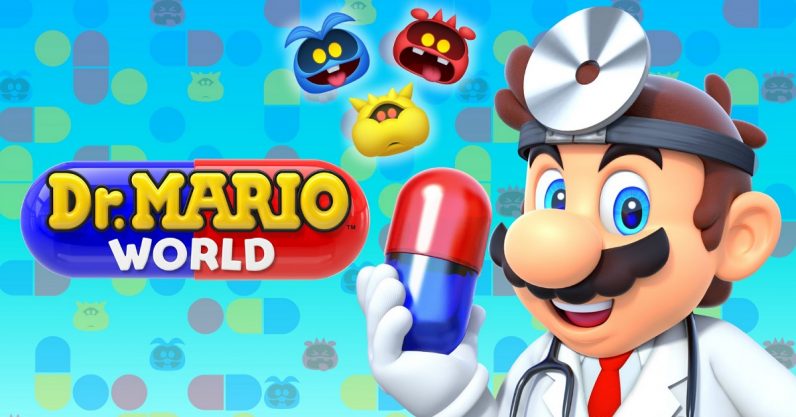 Nintendo revealed last night that its next mobile game is finally hitting the stores next month, and it’s the comparatively low-key Dr. Mario World.

The game appears to be Nintendo‘s attempt to cash in on the Match-3 puzzle genre — sort of like Candy Crush Saga, if that game made me a little less hungry for gummy bears. Unlike the series’ namesake game, which was more like Tetris, Dr. Mario World gives users a certain number of moves in which to eliminate all the onscreen viruses via color-coordinated pills. Gameplay is limited by a stamina meter, which runs out after you complete a certain number of levels but will replenish by itself after a few hours.

#DrMarioWorld launches for iOS and Android devices on 7/10! Follow the official @DrMarioWorld_EN account to stay up to date on all the latest news, and pre-register today!

The game‘s apparently going to sustain itself via a paid currency called diamonds, which allow you to lengthen your play time, obtain items and pills, and unlock new characters. You know, standard free-to-play/freemium stuff.

Dr. Mario World is the revival of one of Nintendo‘s oldest Mario-branded ventures, Dr. Mario having been originally released on the NES. It’s been remade as a Game Boy title, and was re-released on the Wii U’s Virtual Console and the Switch Online’s nostalgia titles. It’s received several sequels, the latest being Miracle Cure for the 3DS in 2015, though I’d wager Dr. Mario is better known as a Smash Bros character these days.

This latest game finally brings the series into Nintendo‘s modern phone/Switch paradigm. According to the trailers, Mario will be joined in his medical venture by Luigi, Peach, Bowser, and even Yoshi (???) who all don dapper lab coats to purge what’s presumably a kingdom-wide infection. Each doctor has their own skill used to help clear the board. Toad’s also around, but I’m not sure why he’s a doctor — I don’t mean this as an insult, but I see Toad as more of a RN than anything. I think they missed a golden opportunity to call it “Dr. Mario’s Hospital,” but what do I know about marketing?

Nintendo hasn’t released a mobile title since Dragalia Lost, which came out last year. Its first attempt at a Mario release, Super Mario Run, went over like a wet firecracker, but the company saw much better reception for the likes of Animal Crossing: Pocket Camp and especially Fire Emblem Heroes. Between Dr. Mario World and Mario Kart Tour, it appeared the company wanted to redeem their mascot character on mobile, though I still think the latter will be much more successful at that than the former given Mario Kart‘s exponentially more popular than Dr. Mario.

The game launches on Android and iOS on July 10. You can pre-order the app now from both stores.