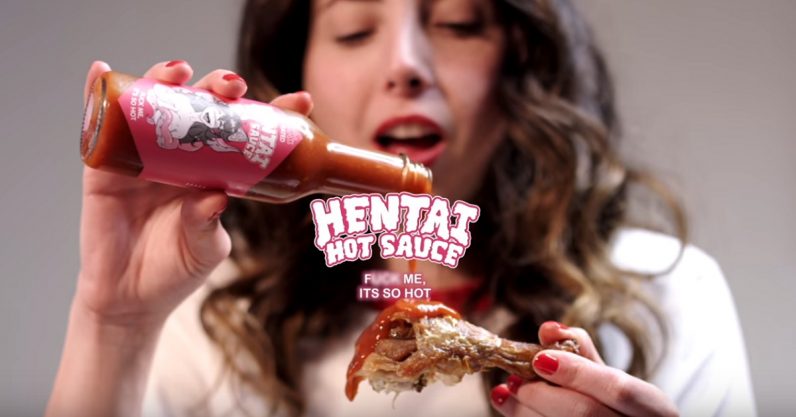 Sometimes it’s hard to describe what a weird day is for me anymore. Shouting encouragement to my first robot vacuum named after a Jetsons character? Routine. Scripting a back-and-forth dialogue between two voices in my head over the merits of a PC gaming store? Yawn. Playing a demon-killing badass in a sequel game I’ve waited over a decade for? All in a day’s work.

I was skeptical of that claim, to be honest.

I’m certainly not the first to try this hot tamale — apparently I’m in the company of Felix “Pewdiepie” Kjellberg, who sampled the sauce on Twitter. He was circumspect, but seemed to enjoy it.

I’m not a wimp when it comes to spicy things, but I rarely have straight hot sauce on anything. Usually it’s mixed in with other flavors, but I’m not cooking up a whole meal just to sample some hentai-branded sludge. So, for better or worse, I went in with a spoon and tossed it down the old hatch.

Through the teeth and over the gums — look out stomach, here it comes:

Yeah, I had a bit of a hard time with it, as you can probably tell. It’s not a bad sauce all things considered. It didn’t exactly leave a flavor on my tongue other than pain, though I did feel it in my stomach for a few hours after the fact. My advice: don’t eat this on an empty stomach.

Still, like I said, I could see myself putting this in some chili or maybe in a marinade at some point. Still, regarding the claims that it’s an aphrodisiac… I don’t think I’ve ever felt less like canoodling than I did after swallowing this.

Read next: Top 100 dapps: Ethereum is for gaming, EOS and TRON are for gambling