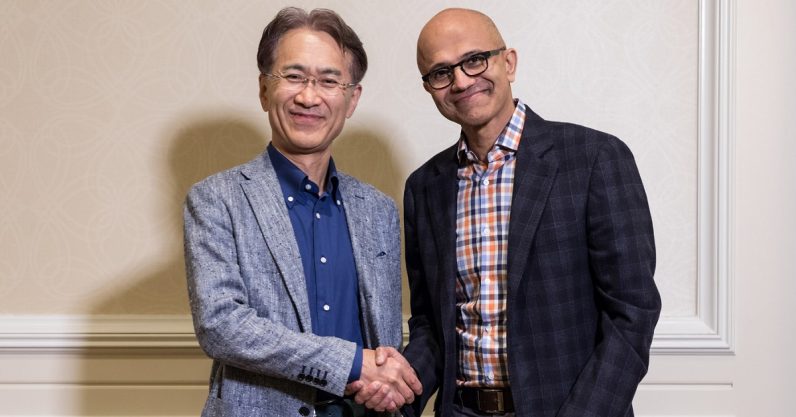 Microsoft and Sony, makers of the eternally-competing Xbox and PlayStation consoles, respectively, today announced they were partnering up to find “joint development of future cloud solutions in Microsoft Azure to support their respective game and content-streaming services.” Basically, the Hatfields and McCoys of the gaming world are burying at least part of the hatchet.

Microsoft revealed the partnership earlier today. The press release opens with this line, which makes it sound like a peace treaty: “Under the memorandum of understanding signed by the parties…” And you agree not to run ads sniping at each other, a la SEGA and Nintendo in the 90s, right children?

Sony CEO Kenichiro Yoshida did take a little sly dig at Microsoft which his counterpart, Satya Nadella, did not: “For many years, Microsoft has been a key business partner for us, though of course the two companies have also been competing in some areas.”

According to Microsoft, the two companies will be collaborating on more than just clouds — Microsoft also offered its Azure datacenters to Sony. Presumably this will allow Sony to expand on its existing streaming service, PlayStation Now, into something comparable to the likes of Google Stadia. But what does Microsoft get out of teaming up with its blood enemy? My guess would be it’s just glad Sony hasn’t run to the arms of Azure‘s competitors.

Both companies are making an effort to break into, or bolster their efforts in the brave new world of game streaming. Sony has the aforementioned PS Now, which it recently expanded into seven more countries. Microsoft has Project xCloud, its Xbox-to-PC and phone streaming service that it revealed last year (and which is likely to make a debut at this year’s E3).

The two companies are clearly reading the writing on the wall — namely that several other companies like Google and Amazon are going to be getting into game streaming (allegedly, in Amazon’s case), and are going to do their level best to convince the world it’s the “next big thing.” Neither Sony nor Microsoft is going to commit to doing gamestreaming full-stop, as both already have consoles currently in development.

But the fact they’re putting enough resources into these efforts, and going so far as to collaborate, shows they understand it’s going to be a thing they’ll be looked down on for not having. When Google begins its Stadia charm offensive, it’s most likely going to point to the likes of the PS4 and Xbox One and their boxy bulk as being an unnecessary weight worth jettisoning. Perhaps by upping their game in the streaming realm, Microsoft and Sony hope to avoid that being a valid criticism.