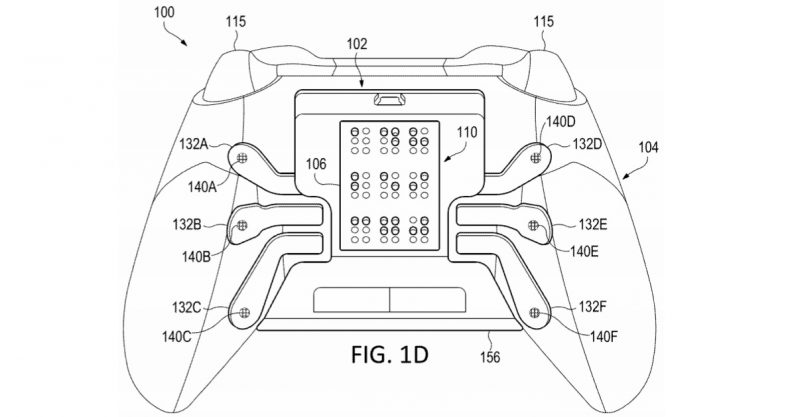 Microsoft has apparently applied for a patent for a new Xbox controller with the ability to show visually-impaired gamers what’s on screen via a haptic Braille readout. If we ever see this controller, it could open up gaming for a whole new group of people, just like Microsoft’s previous efforts in the space — and it could also help games comply with new laws demanding accessibility.

The patent application, first spotted by LetsGoDigital, shows a controller that looks very similar to an Xbox One controller, only with a series of paddles along the bottom. The application describes them as such:

A number of paddles may be arranged on a game controller housing so that a player may engage selected ones of the paddles to enable encoding braille characters using the paddles. This input may be used to control a game, enter text into a chat session or take any other action desired. The converse may also occur, where a combination of the paddles may provide haptic feedback detectable by a user holding a game controller so that the paddles encode braille output (or other data), allowing a user to receive output simply by contact with the paddles .

The device will also have a Braille readout attached to the back of the controller next to wear the fingers naturally fall when the user holds the controller, so that gamers can read text as well.

This isn’t Microsoft’s first specialty controller made for those with unique gaming needs. The Xbox Adaptive Controller, a rectangular controller with oversized buttons made to be accessible to any gamer, especially those who find ordinary controllers difficult to use. Even the packaging was accessible, being designed to be opened by gamers with limited mobility.

This isn’t just a boon for gamers, however. As we’ve discussed before, games released in the US now have to comply with the Twenty-First Century Communications and Video Accessibility Act (CVAA), an accessibility law that, essentially, demands all forms of communication include options that allow people with various disabilities to engage with them. Games were granted various waivers after the CVAA was signed into law in 2010, with advocates saying developers needed time to work out solutions for every kind of person to engage with games. The final waiver expired at the end of last year, meaning all games now must include options for gamers with disabilities, including visual impairment.

Several games have struggled with this — the developers of Anthem and Fallout 76, for example, axed text chat because, if they included it, they’d have to include text-to-speech options for it as well, which would have been more difficult and taken more development time. While the existence of a Braille-based controller wouldn’t rob game companies of the obligation to include such features, it might mean they don’t preemptively cut out things like text chat or other forms of in-game text.

We’ve contacted Microsoft for more information on the application.

Read next: Windows 10 gets a legit Linux kernel and a souped-up terminal app