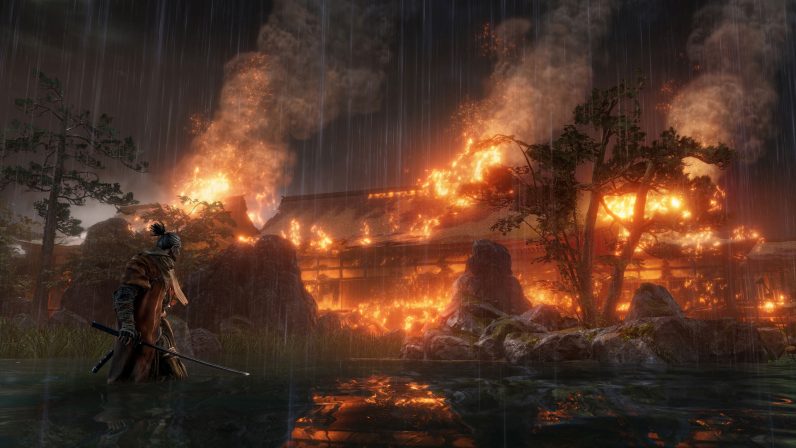 I’ve been to hell and back – and I loved every minute of it. I took a full week off to play FromSoftware’s latest game Sekiro: Shadows Die Twice. It kicked my ass, it made me question my life choices, then I kicked its ass and I felt rejuvenated. This past week has easily been among my favorite video game experiences of all time.

FromSoftware is a storied Japanese developer best known for the Dark Souls games, and Sekiro is the latest evolution of that ‘series.’ I use that word loosely because Sekiro and Dark Souls are completely unconnected in a story-sense, but very much connected in a game mechanics-sense (and difficulty).

Sekiro is set in feudal Japan and tells the tale of Wolf, a Shinobi tasked with protecting the ‘Divine Heir,’ a child that possesses the key to immortality. A warlord named Genichiro is out to get that immortality in order to save his clan. The game starts with Wolf getting his left arm chopped off by Genichiro. This would be a total bummer if it wasn’t for a mysterious sculptor who replaces the lost limb with a prosthetic that has all sorts of cool features, including a grappling hook.

As you progress through the game, you’ll find different prosthetic tools you can slot in (projectiles, shields, etc.), but your grappling hook is always at your disposal and it’s one of the biggest departures from previous games in this lineage.

Older From-games featured a jump button, but it was rarely used and the combat scenarios were built with virtually no verticality. You and your opponent(s) both stood on a flat service and you just kinda circled around your adversaries as you tried to get some hits in.

Sekiro lets you zip across the battlefield, crawl through tall grass, and even swim your way around foes. You’re constantly outnumbered and picking off opponents (using stealth kills is the key to success). Almost every enemy can be killed instantly with a stealth attack, so you’ll always want to stab as many backs as possible before revealing yourself.

Once you’ve made your presence known, it’s time to block, dodge, and deflect your way to victory. Your health bar is small (Wolf doesn’t wear a lot of protection), so you’ll have to master the game’s precise timing if you want to survive.

A lot of Sekiro’s combat revolves around the game’s posture system. This is a new meter that fills as you block hits or take damage. Once its filled you’ll be staggered, leaving you open for an easy attack. This system works both ways though. Every enemy you’ll face has its own posture bar, which you can fill up by attacking them in rapid succession. The key to overpowering the tougher bosses in the game often lies in filling their posture, and once you realize their bars fill up a lot faster when they’re low on health, you’ll have a much easier time with the game.

Another huge new addition to the ‘series’ is Sekiro’s resurrection mechanic. Every time you die, you’ll be presented with the option to resurrect once. After your first resurrection you can build up a meter that allows you to resurrect again by killing a bunch of enemies, but if you die before that second resurrection meter films up you’ll be transferred back to the last checkpoint you saved at. These checkpoints used to be bonfires in the Souls games, but now they’re little idols.

For those of who loved the soul-crushing difficulty of Dark Souls, don’t worry. The resurrection mechanic doesn’t make Sekiro any easier than earlier From offerings. It’s more punishing in some ways, and more forgiving in others. Sekiro strips a lot of the RPG mechanics these games are known for, forcing players to rely more on their combat skills. Previously you’d be able to grind experience points in order to boost your stats and find equipment that gave you a leg-up on the competition, but that’s all gone.

You still get some some stat increases and gain XP, but the former are ultra rare and the latter mostly buys you new moves. Initially I was weary of those changes, but I’ve grown to love them. They streamline Sekiro in such a way that you always have the feeling you can handle whatever the game throws at you, but never without effort.

FromSoftware’s games have always been about presenting you with challenges that are on the verge of impossible but still within reach, and Sekiro takes this to the next level. It’s not about your level or your equipment, it’s about studying your opponent’s moves and exploiting their weaknesses. Victory always feels like it’s within reach, but you’ll have to work for it. And when you finally do get it – when the game clicks and you manage to dodge your assailant’s attacks like Neo dodges bullets in The Matrix – it’s the best feeling in the world. A feeling no other game offers.

Like its predecessors, Sekiro is daunting, unforgiving, and unwelcoming. It demands a level of commitment and patience that few other games dare to ask for, but it gives so much in return. This is the video game equivalent of free solo’ing El Cap and reaching the proverbial top gives you a feeling that few other games can give. A combination of pride, relief, and invincibility that you only get after sitting on the edge of your seat for an hour, with sweaty palms and clenched teeth.

After my week-long staycation I can safely say that Sekiro is a true masterpiece. It incorporates everything FromSoftware has learned by making this sort of games for the last seven and a half years, and molds it into their most streamlined game yet. The result is a tougher, but fairer game. It feels like Sekiro is the game From always wanted to make, but couldn’t, until now. And when one of the best developers in the business makes their magnum opus, we all win. Even if it beats us into submission before it lets us enjoy it.