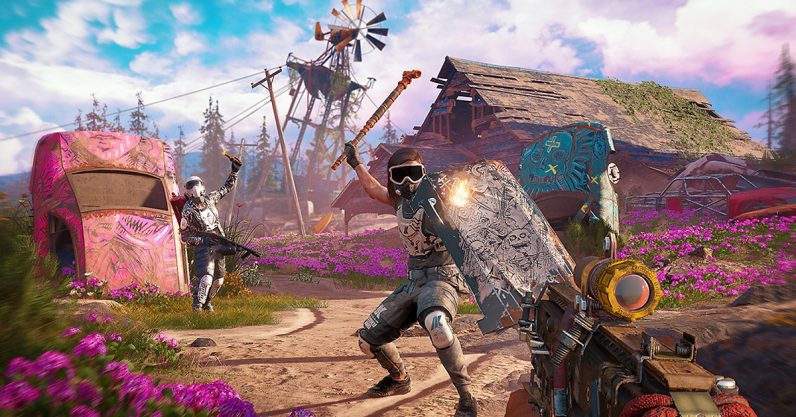 Far Cry New Dawn looks like it should be a big shakeup to the series, but once you peel back the outer layer of neon-pink paint, it’s the same old Far Cry underneath. If you like the series’ trademark open-world busywork, then it’ll scratch your itch. But, while it does show flashes of potential, the crazy post-apocalyptic mayhem it promises never really materializes.

Far Cry 5 ended (at least canonically) with nuclear bombs wiping out most of the United States. New Dawn has absolutely no problem spoiling that, so I don’t either. After two decades, the nuclear winter has come and gone, and Hope County is in bloom once more. Society now consists of loose settlements, who must be saved from the tyranny of criminal overlords known as the Highwaymen.

You play the nameless Captain, a former security officer for a rebuilding operation who, thanks to the machinations of the villains, is apparently the only person in all of Montana who can protect the peaceful community of Prosperity and help it rebuild. Yes, even in a world where an entire generation of people grew up in the hardscrabble post-nuclear haze, everyone still relies on some random mute dipshit to get all their errands done.

If you wanted more Far Cry, by golly you got more Far Cry. Same guns, same gameplay, same vehicles. Even the map is a smaller version of Hope County, dotted with gutted houses and cars upended and buried nose-first in the dirt. That’s great for the first few hours, when the sheen of vibrancy has not yet worn off. But once you’ve raided a few enemy outposts and shanked around 50 Highwaymen, the ennui starts to set in. Far Cry 5 is only a year old — it hasn’t been gone long enough for me to miss it.

Luckily, the story is relatively short, enough that it doesn’t wear out its own welcome. New Dawn quickly gets back to the series’ roots by having the villains, twins Mickey and Lou, make their grand entrance in hammy glory, smashing a guy’s face into jelly to prove a point. Finally, says I. We’re back to the Far Cry standard after the last game tried to convince me to be afraid of the whispery Joseph Seed. Sadly, the twins don’t get more than a few minutes of cumulative screen time to shine, but they’re enjoyable while they’re there.

Bizarrely, the game doesn’t exactly seem interested in following up on just what the heck happened in the canonical ending of Far Cry 5. The bombs dropped, as Joseph said they would, but the timing was way too convenient. There were hints in that game that the United States was in some kind of nuclear standoff with North Korea, but it was never expanded upon. The game did hint, if I remember correctly, that Joseph might have had some insider knowledge and his “prophecies” were just him manipulating the situation to his advantage.

You’d think the question of who dropped the nukes would be kind of a hot topic in a post-nuclear world, but if the game ever once explained that, I missed it. Instead, the game keeps insisting Joseph was right and does have some sort of divine knowledge, which (to me, at least) makes him even less interesting than he was in the previous game. They even have his followers appear as an idyllic hunter-gatherer community that allies with the Captain, because I’m supposed to accept that the apocalypse transformed them from a psychotic, murderous cult into the elves from Lord of the Rings.

Still, it’s not a total wash. The game does have some delightful companion characters, such as a boar named Horatio who hits like a tank, a cheerful, septuagenarian sniper named Nana, and the grim, silent Judge — who may or may not be the player character from the last game. It’s the missions you spend with them, listening to their chatter (or not, in the Judge’s case) and buddy-copping your way through enemy outposts that make the game worth playing.

One of the few new additions are some minor RPG elements. For example, enemies and missions are now marked with four tiers of difficulty, along with some appreciable difference in enemy design. The game brings back perk points, allowing you to level up various abilities. And the series gives you actual superpowers at about the midway point, such as a double jump and invisibility. Realism? Pff, we don’t know her.

The other major difference is “Expeditions,” in which you go on supply runs with your local helicopter pilot away from Hope County. The locations include an aircraft carrier, a ruined amusement park, and Alcatraz Island. These were my favorite parts, as it gives you the chance to test your skills in very different environments. It’s kind of telling that New Dawn is at its best when it gets away from its Far Cry 5 roots.

The main reason New Dawn is a bit disappointing is that Far Cry has usually used spinoffs to create something entirely new and different, something not beholden to the series’ usual tropes. Far Cry Blood Dragon was a tribute to eighties schlock movies. Far Cry Primal was a weird caveman adventure. Both repurposed assets from 3 and 4, respectively, but still told a new story. Far Cry New Dawn doesn’t play around enough with the assets it’s building from. It’s just Hope County 2.0: Now with more Neon Pink Mad Max Rejects.

But hey, if all you wanted was more Far Cry, here it is. Enjoy.

Read next: Taylor Swift is watching you watching her