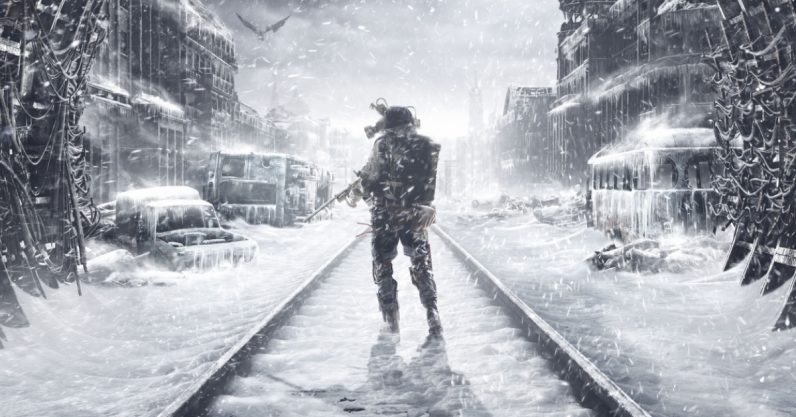 Metro Exodus tasks you with traversing post-apocalyptic Russia on a steam train. It’s as simultaneously grim and fun as it sounds. It stands out from this month’s dense competition thanks to its engaging story and excellent combat, and it’s definitely worth checking out if you want a challenging first-person shooter.

Metro is a somewhat underrated series of stealth/horror/action first-person shooters based on the novels of Dmitry Glukhovsky. If you haven’t played them yet, I highly recommend you pick up the Redux collection, which gives you both Metro 2033 and Metro Last Light.

You play as Artyom, a Spartan Ranger who lives in the Moscow Metro tunnels, home to the tiny population of Russians who survived a nuclear attack many decades ago. Together everyone huddles in the dank, dark tunnels, eking out a meager existence. The surface is nothing but an irradiated wasteland. Or is it?

Artyom and his wife Anna go topside to pursue a mysterious radio signal indicating life might exist outside of the miserable Metro. Together with Artyom’s Ranger Squad, they’re cut off from their home and forced to go on a journey across Russia to find the rest of civilization. Traveling via steam train, they stop at intervals to interact with the colorful locals. The surface isn’t much friendlier than the Metro, as irradiated wolves, sea monsters, and crazy humans try to stop them.

One of the best things about the story is that it doesn’t necessarily expect you to have played either of the previous two entries in the series. The game delivers just enough exposition about the story so far — I suspect because it’s trying not to alienate fans who haven’t read Glukhovsky’s bridging novel, Metro 2035.

After a few hours, every character aboard the Aurora feels like an old friend. If you take the time to listen to their between-mission dialogue, you’ll quickly become fond of them. Anna in particular is lovely, and her trust in Artyom will make you feel like a hero. It’s diminished somewhat by melodramatic voice acting that makes two people standing a foot apart appear to be shouting in each other’s faces, but eh… at least the Russian accents aren’t too over-the-top.

It’s been a while since I played a Metro game, but from what I recall, the surface instilled the same primal fear in the player it did in Artyom. Basically, if you were up top, you were screwed. Not only were you constantly sucking in radiation, but every creature above ground wanted to use your bones as a toothpick.

But in this game, the surface is your new home. You and your new train, the Aurora, find yourselves in worlds themed around the seasons, from the banks of the debris-filled Volga to the desert that exists where the Caspian Sea once was. In fact, the Caspian Desert level is so big I catch myself wondering how the subterranean Metro dwellers in Artyom’s party are dealing with the agoraphobia.

What the game loses by leaving the oppressive gloom of the underground, it makes up for by introducing a day-and-night cycle, with each time of day offering a different set of perils for poor Artyom. You have to make your best guess what time is best for pursuing certain objectives.

The game also has a crafting system, in which you have to maintain your guns and equipment in order to keep standing up to the perils of the open world. It gives you an organic reason to go hunting through the open worlds for duct tape and lighter fluid or whatever Artyom is using to hold his Kalashnikov together.

It gets a little trying at times, mostly because Artyom’s guns degrade if an enemy gives him so much as a dirty look. But it’s still a relief to be able to craft yourself a new medkit when you’re running low during a difficult mission.

Don’t shoot until you see the whites of their eyes

Coming out at roughly the same time as Far Cry New Dawn, Crackdown 3, and Anthem (if you have Origin Access), Metro Exodus does come across as the drabbest of the bunch. It lacks the screaming color palette of New Dawn or the raw gratification of Crackdown 3. It’s dingy and gloomy, with everything covered in about six inches of rust, and a flashlight that might illuminate the end of your gas mask if you’re lucky.

So what sets Exodus apart from the bunch? Apart from the excellent story, it’s also one heckuva challenge. Even in normal mode, you have to hoard your ammo and medkits, place your shots carefully, and choose how to spend your resources with extreme care. Enemies react to bullets like they’re mosquito bites, and if you get into a fight with more than two at once, you’re a goner.

The one thing I’m not too keen on is the introduction of what can only be described as zombies. Irradiated humanoid mutants that try to eat Artyom, they’re a weeping nuisance at the best of times. I can’t tell you how many times during a stealth section I’d have one of them drop down from the ceiling on my head. And once you aggravate one, it summons seven or eight of its friends to come tear you a new one.

Metro Exodus is a load of fun, especially if you’re looking for a great stealth or survival horror game. The enemies can wear out their welcome, but the game‘s atmosphere, challenge, and interesting story balance out some of the more annoying aspects.

Read next: How to remotely take over another Mac (or share your screen) using built-in Apple software