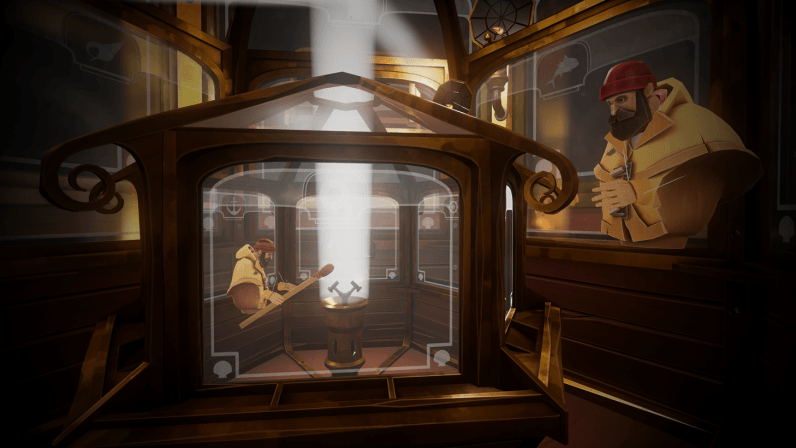 Vertigo Games today released its VR puzzler A Fisherman’s Tale, a game in which you play with yourself to solve a puppet’s problems.

If that makes sense to you, you’re doing better than I did. I checked out the game over the weekend, but admittedly I wasn’t keen on the premise at first. It seemed like an interesting gimmick – you move and puppets above and below your avatar also move – but a whole game?

Yet I’m so very glad I dove into the world of A Fisherman’s Tale and gave it a chance. Because it’s second only to GNOG among VR puzzlers I’ve played, and a close second at that.

First up it’s well-produced. Vertigo Games is the same publisher that brought us the seminal Arizona Sunshine – one of VR’s greatest hits so far. And, given the publisher’s pedigree, developer Inner Space VR doesn’t disappoint. A Fisherman’s Tale is as polished and professional a VR game as we’ve seen.

The graphics are mostly what I’d describe as “good,” but, during some cut-scenes they end up being great. I found myself wishing one specific scene would just go on forever because, as a sailor, it felt nice and familiar to watch the ocean roar around me for a bit.

The voice-acting and audio are also top-notch. Your mileage may vary when it comes to some of the character accents, but I liked the somewhat-subdued performances.

The mechanics can be a little twitchy, but that’s par for the course for current-generation VR titles. Playing on an Oculus Rift with only two sensors (I recommend three for any games with ‘room-size’ playing areas) I was still able to enjoy the game with a minimal loss of immersion.

During the game you’ll control the hands and movement of a puppet that’s found itself in a world-within-a-world puzzle. The puppet’s hands can be extended and retracted, making grabbing and manipulating objects easier. And, without spoiling anything, you can do some cool things by moving objects from one world-model to another.

The story is a joy to play through, so I won’t spoil any of it. Suffice to say there’s enough levity and heart to make it stand out. If you’re anything like me you’ll want to see it through just to find out where the tale is taking you.

The game is a delightfully cerebral experience. The puzzles aren’t excessively difficult to solve, but they are a lot of fun to figure out because you’ve probably never played a game quite like this.

A Fisherman’s Tale is a fantastic VR title for just about anyone. There’s little here that’ll cause motion-sickness, and it’s playable standing, seated, or as a room-sized experience. It’s available now on most virtual reality platforms.