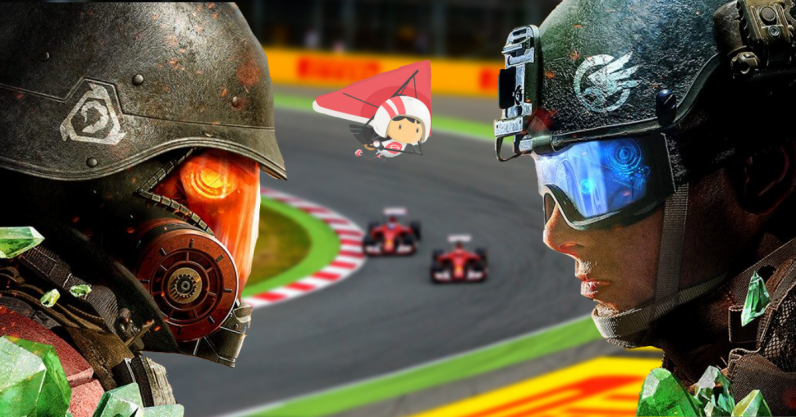 With Tumblr’s new algorithm to combat adult-content mistakenly cracking down on everything from pictures of vases to dinosaur bones and Pokemon fan-art, Tumblr is slowly turning on its own audience. And so if you’re getting tired of Tumblr too, here are a few games that are sure to keep you entertained until Tumblr get its new algorithm under control.

F1 Mobile Racing is a high quality officially licensed F1 mobile racing game from the DIRT PC/Console game developers Codemasters, with real-time 1v1 PVP matches, singleplayer training matches, and no energy systems (so you can play as much as you want!).

With no less than three different control setups and multiple settings for braking, steering, and stability assists, the game is very easy to get into as a new player while remaining challenging for veteran players.

Overall, a well-made and realistic F1 game on mobile.

Ava Airborne is a highly polished, endless adventure game by Snipers vs Thieves developer PlayStack. In the game, you pick a contraption, such as a yo-yo or a rollercoaster car with an attached jetmotor — each of which comes with a unique control mechanism that changes the gameplay completely — and then fly/glide as far as you can, avoiding the many obstacles, picking up currency, and bouncing off of trampolines to stay afloat.

Once you die, you can spend the game‘s currency on unlocking new contraptions, launchers, buddies, and much more before you head into another round of endless flying or go for a multiplayer PVP match.

The game UI is some of the most beautiful I’ve ever seen, and it makes the game feel truly unique and special.

Get Ava Airborne on Google Play.

GrandChase is a high-quality action RPG hero collector based on the 2003 side-scrolling MMORPG of the same name. There are 70 heroes to unlock, but luckily all of them can be upgraded from 1-6 stars, meaning that even if you’re unlucky with your pulls, it’s still possible to eventually get great heroes.

During combat, you tap to move your team around in the 2.5D world, using a tap-and-swipe mechanic to dodge hordes of enemies, and drag-and-dropping to fire skills (MOBA style) at the right time to complete each 2-3 minute level. There’s an auto-move feature that I (to my surprise) quite liked, but I suggest avoiding the auto-combat feature as it’s horrible — which is frankly a good thing as RPGs with auto combat tend to become boring.

The game‘s soundtrack is enjoyable, and the game is stock-full of content, such as campaign, trial towers, PVP, Dimensional bosses, a hero’s Tower etc., and no energy nor VIP system, so there’s lots to dive into in GrandChase.

Get GrandChase on Google Play.

Command & Conquer: Rivals is an intense RTS multiplayer 1vs1 PVP game where you deploy buildings and units to fight over control of 3 zones on a small map. Controlling the majority of the zones will slowly result in a missile warm-up and fire, which will take 50 percent of the opponent’s base HP.

Seasoned C&C players might not like the simplicity of the game in comparison to its PC counterpart, but as a stand-alone mobile title the more intense gameplay does well. The strategy in the mobile version lies in picking which units to take with you into battle, and figuring out how to best counter the opponent’s units and strategy.

Much like Clash Royale, units unlock and are leveled up by collecting cards rewarded through lootboxes (both free and paid), or through advancing in rank. The iAP makes it possible to progress much faster, but EA has big plans for building an e-sports scene around the game, having hired the person who built the Vainglory e-sports program. So let’s see if they can get the balancing right!

Read next: How blockchain technology can — and can't — prevent sexual assault