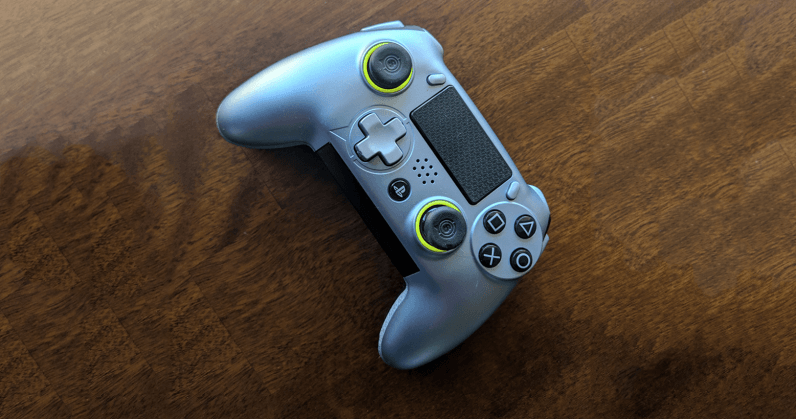 Update: Shortly after this review SCUF released a firmware update for the Vantage controllers. We’re happy to say that the issues we mention here have been resolved, and that the Vantage line is working as intended. It’s still not our favorite SCUF controller — the side button placement is awkward, it doesn’t feel as luxurious as some other SCUF controllers, and we find the interior paddles difficult to reach — but we’re comfortable recommending it for anyone that’s looking for a change from models based on the PS4 controller’s OEM design. Controllers are a personal thing. It’s quite possible you’ll love it.

For anyone experiencing the issues we describe below, you can update your firmware here. In our experience, it’s well worth the trouble.

I love SCUF controllers. Or, more accurately, I love all of them but this one.

As the proud owner of two of the Infinity4PS Pro models, it was always an easy recommendation to make for anyone looking to drop their hard-earned cash on a premium product. I’m a gamer, and that tag comes with certain responsibilities — chief among them is spending money on things I absolutely do not need. So when the opportunity came up to give the Infinity4PS Pro a try last year, I jumped at it, even going so far as to recommend it in our holiday gift guide.

That model was, and unfortunately still is, the best controller I’d ever picked up for the PS4. And it it’s still my daily driver. At this point I scoff at the idea of using an OEM model from Sony, or any other less-than-premium offering. I have taste, after all.

Needless to say, I was more than happy to try out its newest option, Vantage, a PS4 exclusive built from the ground up. From the ground up, in this case, isn’t just marketing speak. SCUF actually built a controller that didn’t rely on the OEM design, like in previous models. The finished product looks more like the Xbox One Elite controller, in fact, than a Sony product. This is a good thing. Sony, after all, doesn’t offer an ultra-premium model and gamers are none to pleased about it.

Before it shipped, SCUF asked me to customize it to my hearts’ content. I obliged. Believe me when I say that nearly everything is customizable. You’ll pick the faceplate color, the anti-friction rings, rear triggers, and even multiple thumbpad options, including height, shape and color.

It arrived days later. The packaging was gorgeous, offering your first glimpse of just how premium a product your new $200 controller is. Inside there are multiple replacement accessories, a manual, a heavy-duty USB cable for connecting it to your PS4, and a nice carrying case for travel. Aside from getting a grey-ish looking model faceplate rather than the white one I ordered, everything was coming up roses so far.

On initial inspection, Vantage feels great in the hand. It has a nice weight to it, though it doesn’t feel quite as premium as the Infinity model I’d grown accustomed to.

The Infinity, aside from being $50 cheaper, just feels more premium. It’s a bit heavier, has a nicer finish (somewhat rubberized, though glossy and smooth as opposed to the plastic feel of the Vantage faceplate), and just feels like a better value for a controller that offers much of the same functionality as the more expensive upgrade. It too is highly customizable. The only noticeable difference — aside from am a more premium feel — in fact, is the lack of the Vantage’s two side buttons and an OEM-like thumbpad placement (as opposed to the staggered, Microsoft-like Vantage positioning).

As for performance, it’s hard to say. Initially it felt great, playing sports games like Golf Club 2019, and NBA 2k19. After switching to shooters, however, I noticed a disturbing flaw in the thumbpad that made both lose sensitivity in certain areas. On a full pull, meaning all the way to any side, they worked fine. More minor adjustments, the type needed to excel in first person shooters, for example, left dead zones where the on-screen cursor was completely unresponsive. Dealbreaker.

The woes didn’t end there. After plugging the controller into my PS4 to ensure it was fully charged, I was disappointed to find out that it wouldn’t turn the PS4 on when you pressed the center button, like my other SCUF controllers and OEM models. Figuring I was doing something wrong, I consulted Google, only to find out that others were struggling with the same problem. Some blamed it on Bluetooth connectivity issues, and while I’m not sure that was the cause of mine, it certainly makes sense.

Programming the additional side buttons or bottom triggers was easy enough, although the positioning was a tad problematic. The side buttons caused a lot of accidental presses as that’s where my hand naturally rests when using the controller.

The triggers were equally odd, a problem the Infinity shares. While the closer trigger, the larger one, is easy to reach, the other is practically unusable. It’s a stretch to reach the second set of triggers, and I can’t see any use case that makes sense to completely alter the way you hold the controller. Especially once you consider how often you’ll have to program it.

That’s right, the triggers, as well as the additional buttons, don’t store your button mapping. Meaning, each time you turn on the PS4, you’ll have to reconfigure the buttons. It gets old, fast. Eventually I just abandoned it and played with the default buttons, no remapping.

The only thing I did like about SCUF’s Vantage PS4 Controller was that battery life was excellent. I averaged two-to-three days of play time as opposed to the six-to-eight hours I’d get on an OEM controller. Infinity, though, offers excellent battery life as well.

Overall, I should be able to recommend Vantage. It should offer a highly customizable step up from OEM performance, and offer hardcore gamers great value for the money. It doesn’t.

Quite simply, it feels like a product that needs more development time. It’s simply not ready for consumers.

Even then, though, I’m not sure I could recommend a controller that costs more than a PS4 Slim, and almost as much as. PS4 Pro, especially when a better option exists in the cheaper Infinity4PS Pro ($150).

I’m still a SCUF fan, but this one isn’t for me.

Buy the Infinity4PS Pro instead.