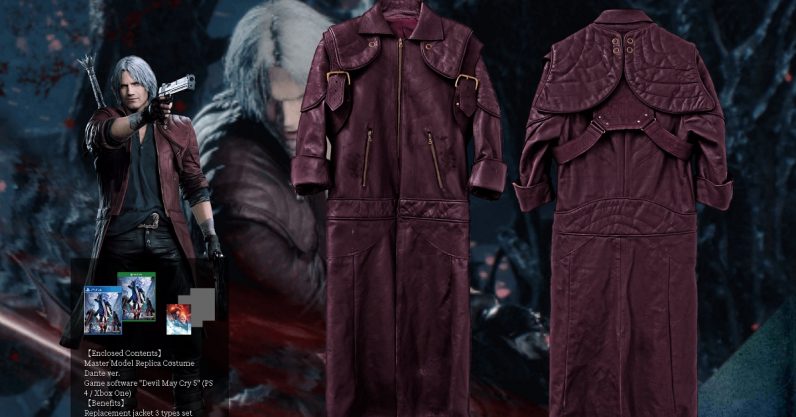 Capcom recently revealed three new bundles for its upcoming game Devil May Cry V, all with four-figure prices. While this is a little much even for an industry that loves expensive limited editions, I can’t help but be seriously tempted thanks to one of the perks — a snazzy coat.

Available exclusively through Capcom Japan, the bundles include the game, natch, some box art, and a replica of the jacket of one of the three main characters: V’s sleeveless trench ($5,741), Nero’s hoodie ($7,176), and Dante’s red leather coat ($8,600). Given the exorbitant prices, the promise of an item for amateur cosplayers might seem like a bit of a paltry reward. But damn it all…I want one.

Overpriced game bundles are nothing new. While asking $8,600 for one is pushing the envelope even for gaming — the usual Deluxe Ultra What Have You Edition comes in at around $300 or somewhere thereabouts — we’ve seen worse. Remember that one Dying Light bundle that cost over $380,000 and came with a zombie shelter and parkour lessons? I still wonder about the poor soul who bought that, assuming anyone ever did.

Up to now, I was one of those cynical people who looked down my nose at expensive novelty game bundles. Who would want to pay three or four figures for a bundle of ultimately useless frippery that, occasionally, doesn’t even include the actual game (see the “Collector’s Box” edition of the upcoming Red Dead Redemption 2)?

But now, I can no longer name myself among that aloof elite, because I too have seriously considered shelling out a good portion of my savings for an overpriced game bundle I most certainly don’t need.

Specifically, I’m salivating over my man Dante’s leather overcoat. I (along with the rest of the world) know next to nothing about Noctis-lookalike V, and as much as I love Nero, he’s not Dante. With the possible exception of his female counterpart Bayonetta, I’ve never wanted to be a video game character as badly as I do Dante — and keep in mind I put “basically Lara Croft” on my resume when applying for this job.

So all that remains is to ask you, my gentle readers: Who wants to go halfsies with me? You can have the game, and I’ll take the coat, which seems like a fair trade to me. We’ll probably have to wait for the bundles to be offered to Western audiences, assuming that ever happens, but I can be patient.