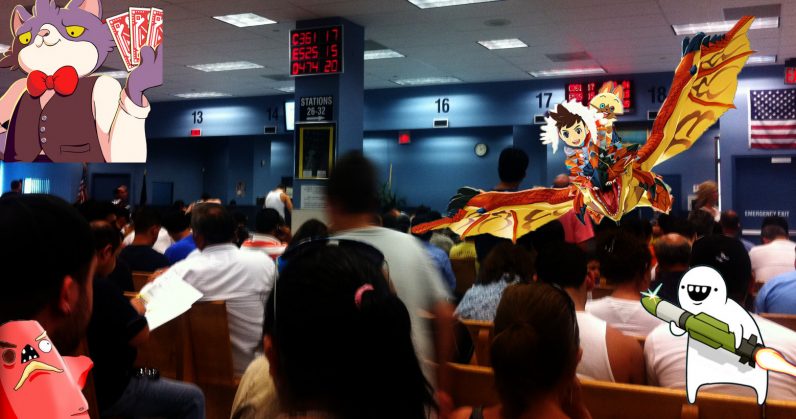 What’s worse than having to renew your plates? Waiting in that dreadfully long line at the DMV while listening to people complaining about the long lines at the DMV (no, Tim, we won’t allow you to jump the line, so just stop it!).

But fret not, you glorious Android gamers – we’ve got a fresh bunch of titles to help you while away the hours while you wait for your number to be called.

Monster Hunter Stories is a port of the Nintendo 3DS title that released last week, with a free trial and an option to unlock the game’s full contents for $20.

The gameplay isn’t as epic as the console and PC versions of the franchise. Instead, it presents with a much slower, Pokémon-style experience, in which you tame cute monsters, ride them, and use them in the turn-based combat. It’s still hella fun, though!

The graphics aren’t pushing what’s possible on mobile, and the asking price of $20 is a bit steep given what you get for your money. There’s still a good five-six hours of gameplay in the trial though, so fans of the franchise and newcomers can both decide for themselves if it’s worth their time.

7 years from now is a plot-driven adventure game that plays a bit like a visual novel. It’s quickly gaining popularity in the Play store, thanks to its substantial, intriguing story.

The blocky graphics might remind you of Minecraft, and the gameplay doesn’t involve much more than moving around the environment in each scene and engaging in conversation. But you’re here for the story, which is both immersive and emotional – and it gets better as you progress through the game. This is a true gem that’s worth playing through till the end.

Get 7 years from now on Google Play.

Cat Stacks Fever is a unique speed Solitaire-style card game that see you flip a card from your deck and sort it into one of four stacks in descending order. Sounds simple, right?

The twist that makes the game infuriatingly difficult is that you have a limited time for each action, and the further you advance, the less time you get per turn. You’ll have to be careful to avoid the wrong stacks – which will kill your combo – and you’ll have to be quick in order to keep the game going.

With standard, zen, and expert game modes, this one’s easy enough to get into and play for a challenge, or enjoy at your own pace.

Missile Dude RPG is a Google Play “Editor’s Choice” idle clicker which has you slaying endless rounds of wacky monsters by tapping the screen to fire hilariously-designed missiles (I’m looking at you, Penguin missile), deploying troops to attack your enemies, and upgrading your arsenal to increase the damage you can dish out.

If you enjoy a wacky art style and want something you can play without having to pay too much attention to your screen, Missile Dude RPG might be just your thing.

Read next: We need to build AI systems we can trust