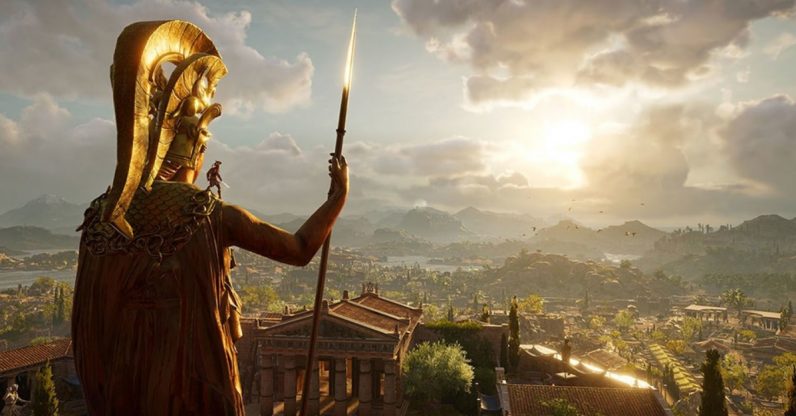 Another year, another Assassin’s Creed. The series made a triumphant comeback from a year-long break in 2017 with Origins. Now it’s aiming to duplicate that success with Odyssey, yet another jaunt through Classical Antiquity starring a tragic hero. While it does duplicate the formula in some ways, and improve on it in others, there are sadly many places where Odyssey doesn’t live up to its dramatic promise.

Odyssey is the 11th (main) game in a series which has been around for 11 years. Its timing has been consistent, if nothing else — though I do wonder how hard the project managers at Ubisoft have had to crack the whip to get that many games out that regularly.

The game is set in 5th century BC, four hundred years before Origins. During the Peloponnesian War, a rascally Greek mercenary — Alexios or Kassandra, depending on who you choose — sets out to make their way in the world, discover the fate of their long-lost family, and subvert a massive conspiracy that for some strange reason we’re not bothering to call the Templars.

Actually, why are we even calling it “Assassin’s Creed” at this point? Quite besides the fact that we haven’t actually uttered the phrase which gives the series its name in two or three games (“Nothing is true. Everything is permitted.), we’ve finally completed the series’ steady divorce from its own core concept by having a game that stars neither Assassin nor Templar.

Odyssey is set before either organization was even conceived (we already saw their genesis in Origins) and the game is barely related to the overall story. Sure, it leaves in a tangential side story set in the modern day (utterly boring, thanks for asking). It also keeps rambling on about the alien precursor race and the superpowered garbage they left behind, but that’s a fascination I simply don’t share.

Kassandra/Alexios… you know what, let’s just call the two “Alexandra” from now on. Alexandra’s personal life is tied intimately with the conspiracy, and the game does a good job tying the two main story threads together. Without meaning to spoil, there are several points where, to advance one plot, you have to make some headway in the other. It’s satisfying, and gives me a reason to do parts of the game I’d otherwise ignore.

Just don’t expect historical accuracy this time around. While you’ll meet with famous figures of history — Sokrates, Herodotus, etc — there’s a bit of a feel that you’re playing a Hollywood-ified version of history. That’s perhaps best exemplified by the “Spartan Kick,” an ability that lets you perfectly mimic a certain meme-ified move from the movie 300.

Let’s just say I knew we were going for “quasi-historical” when King Leonidas, the leader of a culture famed for using their shields for near-impenetrable defense and for whom losing one was an utter disgrace, flings his shield at a passing Persian foot soldier like a frisbee. Within the first two minutes of the game.

There was one other thing I quite liked. The game has multiple endings, and choices you make as far back as the first chapter will have some bearing on the ending you get. Sometimes apparently minor quests can affect your choices later in the story, and dialogue options you pick may come back to bite you in the ass. This is actually quite well done, in that it’s not always obvious which choices are going to change the outcome and which ones aren’t. There’s no big “Deimos will remember that” alert flashing at the top of your screen to show you that you just made a big, impactful choice. It feels more organic than any other game I’ve seen thus far.

Alexandra, as the hero of an RPG, has to be fairly vague in order to account for the different dialogue options the player can choose, but they do have several moments where I felt connected to their character, felt sad for them, and cheered their victories.

The character in the main storyline and the more important sidequests is a noble, sentimental orphan simultaneously eager to work for a better future for themselves and clinging to a broken past they barely remember. When they realize they have a chance to find the family they thought lost, they leap at it with both arms open. They know their actions have consequences and bear that burden with equanimity, just like the player. So I liked them, truly.

Where they lag is in the peripheral sidequests where they often behave in a frivolous manner that makes me like them a bit less. The worst offenders are, by far, the romantic sidequests.

Now, I have no problem with sex, not even sex of the casual variety. What I do have a problem with is sidequests that make the main character — an otherwise likeable character — into an insensitive rake who screws their way across the Mediterranean with no real romance, no emotional depth, and not even a sexy cutscene a la The Witcher as some base form of payoff.

In one of the first ones you encounter, Alexandra openly propositions a woman standing feet away from her dying father, just as she’s trying to convince them to get the medicine that will save him. We’re not talking sly hints, either. We’re talking full-on “Why don’t you get me out of this armor?”

And this, by itself, isn’t wrong, exactly. It just feels as though it robs these sidequests of the chance to have some emotional payoff in favor of cheesy, slightly icky come-ons. For example, there’s one sidequest where you help a cute doctor take care of his patients and flirt with him while doing so. You find out shortly afterwards that his family hides a dark secret that directly led to the ruination of your own. You can choose to forgive them, and show him that the sins of the past need not color the bright future.

It should be a sweet, resonant scene with emotional depth. Instead, we get this line, delivered with all the passion of an embarrassed drama school teacher’s assistant:

Afterwards, Alexandra is standing outside his house, and the incident is never spoken of again, to my knowledge. Wham, bam, thank you ma’am.

In case anyone wants to come for my Assassin’s Creed bona fides, I’ve played every game in this series multiple times. I even played those mobile games where Ezio saves Christopher Columbus’s ass just before his voyage, and where we discover Altair’s first girlfriend was the Holy Grail. Yeah, that shit actually happened.

So when I say charting the gameplay changes that have taken this series from “stealth-based Prince of Persia successor” to “basically Witcher 3” is confusing as hell even to someone who’s paying really close attention, you’ll know I’m not messing around.

Odyssey tries very hard to keep multiple different forms of gameplay spinning at once. It’s trying to balance ship gameplay, open world exploration, faction warfare, hunting, and a battle of attrition against an ancient cult. It feels as though none of these individual elements get the attention they deserve, so they end up feeling stripped down compared to the way they are when we see them in other games.

To Odyssey‘s credit, the combat is great fun — the best of the series so far, I’d say. Being able to charge, slash, and Spartan kick my way through progressively bigger and badder enemies is just a barrel of monkeys, and while the difficulty can be a little unforgiving, I don’t mind the challenge. Each of the upgrades felt like they had a significant impact on gameplay, and there are plenty of options for customizing your play style. So that’s good. Kudos to you, Ubisoft.

Still, it’s odd that the game seems to always want you to not use the combat, but instead to do things the more “traditional” way. Every time I approached an objective, Alexandra would mutter “I should try not to be seen” or something similar to indicate stealth was the way to play it. But even the stealthy kills are bloody and over-the-top. Realistically, I’m not sure a brute like Alexandra even understands the basic concept of Assassin’s Creed-style stealth, considering they aren’t an Assassin.

It’s not that Odyssey is bad at any of the things it tries to do, per se. It’s just that, for every mechanic it has, I can think of a game that did it better. Fallout, The Witcher, Mass Effect, Metal Gear Solid V, literally every Telltale game… I spotted elements of each one in there, and each time I caught myself wondering why it seemed so lackluster compared with its predecessors.

This is even the case for elements taken from other Assassin’s Creed games. Take the sailing, for example. When it was made a central game mechanic in Assassin’s Creed 4: Black Flag, sailing was a fairly complex affair. You had to take into account wind speed and direction. When you were fighting, you had to place your shots carefully in order to successfully whittle down your enemies, using your ship’s high maneuverability against their size or firepower. In general, it was more complicated than pointing your ship at the quest marker on the horizon and sailing in a straight line until you got there.

In Odyssey, you point your ship at the quest marker on the horizon and sail in a straight line until you get there.

To use another example, take the killing of the Cult members who comprise the proto-Templar enemy group. You have to kill them off one by one, discovering the identity of each one through investigation and clues, and then cutting them down, cutting off each head of the Hydra as you find it. This was how Bayek and Aya operated in Origins, and yet there each Templar’s death was treated with great solemnity. Their deaths meant something, if only as a means for Bayek to get revenge. But here, cutting down Cult members doesn’t feel meaningful. I sliced through three or four of them who went down with as little fanfare as the basic enemies.

Luckily, there’s one thing at which I can say Odyssey excels, and that’s at showing the beauty of the ancient Mediterranean. The Grecian isles and what they might have looked like at their best have never been so gorgeous. The weather patterns and day-night cycle, while not remarkable in their own right, did set up some vistas so remarkably beautiful they made me gasp.

The characters are also rendered beautifully. It’s a bit of a shame their mouth movements rarely, if ever, match up to their spoken dialogue, but that’s something easy to overlook in the grand scheme of things.

Like I said, Odyssey isn’t bad so much as it is a little confusing, indistinct, and overstuffed. The main character is vaguely drawn and zigzags between likable and sleazy at a moment’s notice. The gameplay puts the truth to the saying “Jack of all trades, master of none.”

In short, it’s trying so hard to be other games that I can’t find the Assassin’s Creed buried in there. The clever stealth game that started this whole series has evaporated and left the distilled essence of 2018’s video game trends in its wake. If that’s all you want, then this is your game. If you wanted something with a little more unique, you might be disappointed.

Read next: Google's Project Stream will let you play Assassin's Creed in Chrome