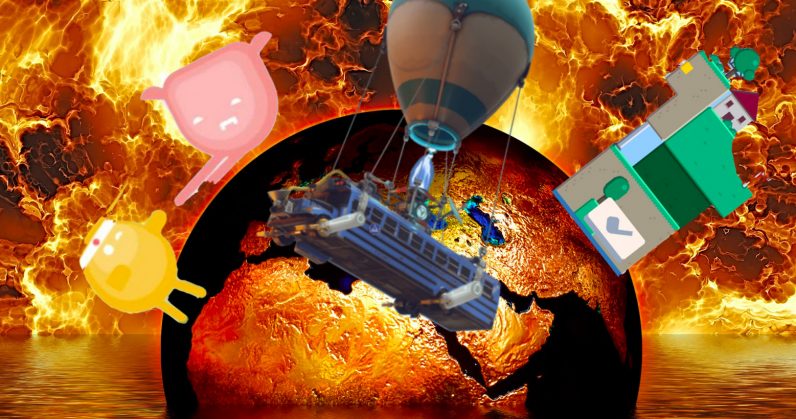 If you enjoy this series, let us know in the comments, and find more of NimbleThor’s recommendations on his YouTube channel.

Between cruel dictators, crooked world leaders, and devastating natural disasters, it feels like we’re only few days till our planet’s impending doom. What are you supposed to do with yourself in this situation?

We’d be playing these three new Android games, because nothing really beats airborne golf, shouting at your friends in Oddman, and dying in frustration in Fortnite.

Golf Zero is a curious mix of a golfing game and a 2D platformer. You’ve got to run around a colorful environment that’s reminiscent of early Super Mario levels, leap into the air,  whip out your golf ball in mid-air (and cause time to slow down as well), and then aim for a hole-in-one. Now that’s golf at its finest.

The levels are brilliantly designed and make it easy to get to grips with the game. But be warned, they quickly ramp up in in difficulty, introducing new traps and mechanisms to deal with along the way.

The game consists of 80 levels and a speed run mode, so it should keep you busy foand monetizes through video ads, which appear occasionally.

Get Golf Zero on Google Play.

The latest game from Set Snail, the Denmark-based studio behind Daddy Long Legs, Oddman is a Smash Bros.-like singleplayer and same-device multiplayer ridiculous game about bashing our opponents out of the map and into piranha-filled waters.

The gameplay is fun, the art style is super “out there”, and the in-app purchases don’t get in the way too much, as they’re mostly needed just to unlock new characters. You’ll encounter the occasional instantly-skippable video ad, though, and those sadly can’t be disabled even with real money.

Get Oddman on Google Play.

Epic Games’ incredibly popular Battle Royale-style title has you jump out of a (literal) school bus with 99 other players, parachute down to earth, grab the best weaponry and crafting items you can find, and take out all your opponents while building fortification that goes all the way to the skies to defend yourself.

The game could use some optimizations as it feels a bit clunky overall on my Samsung Galaxy S8 Plus (especially when compared to PUBG Mobile), but apart from that, it plays just the same as the PC and console versions – and it’s just as gripping. You also don’t need to worry too much about spending on this title, as in-app purchases are only necessary for cosmetic add-ons.

Download Fortnite from Epic Games’ site (not from Google Play – all similar apps listed there are fakes). You’ll also need a compatible Android device that’s on this list, and you’ll have to sign up for the Fortnite beta with your email address here before you can get started.

That’s all for this week, but be sure to tune in again next Friday for more sweet games – if the world hasn’t imploded on itself by then, that is.