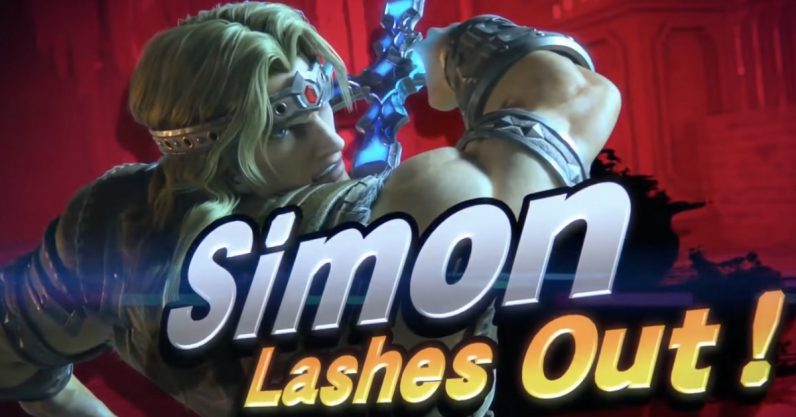 Nintendo yesterday announced new fighters for its super-popular series of fighting games, Super Smash Bros, including Castlevania‘s heroic vampire hunter Simon Belmont. Simon’s inclusion has raised a bit of speculation that there’s something a little bit undead about the rest of the fighters.

The theory was propounded by Comicbook.com‘s Christian Hoffer, and it’s not an unreasonable one. In the trailer, Simon appears to have a short-range projectile that bears a strong resemblance to the Holy Water item in his home series.

Thing is, Holy Water is supposed to be a weapon that only harms demons, vampires, and other evil things. I don’t think it’s intended to be a thing that would work against innocent humans. I wouldn’t know because, to my knowledge, Simon’s never fought a purely human enemy — though, there are roughly 700 million Castlevania games, so I may have missed something.

I could see that weapon working against the likes of Ridley, or Bowser, or that sinister Villager. If you stretch, it could also work against Bayonetta, Robin, or Dark Pit. But Princess Peach, or Zelda, or Marth? Little Mac? Diddy Kong? The beautiful Rosalina? How could something like that harm them?

Hoffer proposed the answer is the fighters are all actually vampires, or at least undead. It’d also explain why Simon feels compelled to thrash them with what looks to be an absurdly slow whip attack.

Alternatively, this version of holy water could be the version which existed in editions of the game which were scrubbed of religious imagery. In those games, the Holy Water weapon was renamed “Fire Bomb.” I could accept a “Fire Bomb” harming Kirby’s little head, but holy water…actually, I can see Kirby reacting badly to holy water as well.

Of course, it might be fruitless to look for logic and consistency in the Smash Bros narrative, given that it is a Fighting Game and a reason for everyone to beat the snot out of each other isn’t really needed — not that that’s stopped me, Hoffer, or thousands of fans before.

The latest iteration of the game, Super Smash Bros Ultimate, is coming to Nintendo Switch on December 7. Simon will be joined on the newcomer slate by the Splatoon Inklings, and King K. Rool from Donkey Kong.

Read next: Nintendo's Switch has a hidden VR mode -- but don't get your hopes up