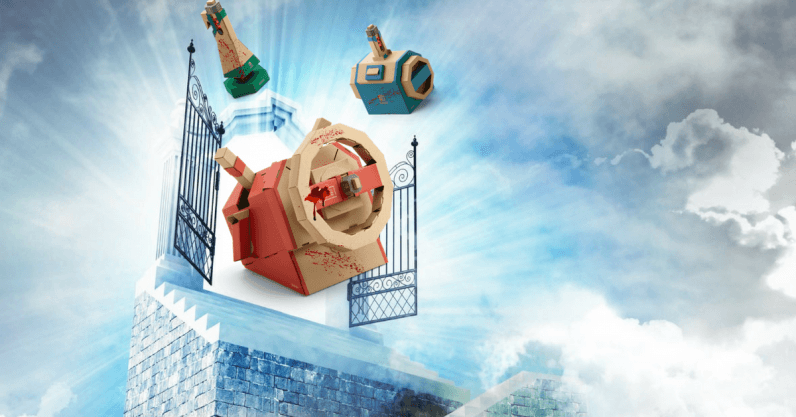 Recently, Nintendo and I have been… going through some stuff. I could go into far more depth, but we’ll save that for a different time. Why? Because today we’re here to talk about the announcement of Nintendo‘s new Labo add-on, the vehicle kit and, specifically, its promo video.

For those who don’t know, the Labo is a build-it-yourself cardboard system that interacts with the Nintendo Switch. This new vehicle kit is the third Labo set (after the robot and the variety bundle) that the company has released. In it, you make three different controllers for in-game vehicles: a steering wheel for a car, a joystick for a plane, and a… thing for a submarine.

Watched it? Great. Then you’ll have the same thoughts as me: something’s wrong. Horrendously wrong.

Nintendo, you need to answer some questions. Now.

First off, why’s that TV there?

Garages by their very nature are cold, drafty places filled with dust and wood shavings and oil and paint and debris and smells. They are no place for expensive equipment. Maybe it’s a sign of age. When once I was young and carefree and easygoing, putting things wherever I desire to put them, I’ve now grown withered and bitter, wanting items to be in their right places.

Seriously though, don’t put a TV in the garage. It’s going to get ruined. Ruined.

Does the homeowner get off from destroying technology? That’s an expensive hobby, friend. And, look, I’m not a parent, but banishing your child to the garage to go and play video games doesn’t scream carer of the year to me. What. Is. Happening?

And what sort of people own this garage?

I’m going to list some of the things I can see in this shot.

No thanks. I will decline your invitation for a dinner party if this is what your garage looks like.

Also, why is EVERYTHING sexualised?

Actually, this is almost definitely just me.

WHO IS THIS MAN?

This man. Who is he? Where has he come from? I feel the video wants you to believe that this is the child’s father, but this is simply not possible. Look at that photo above. Look at the man’s expression. And again. No parent has ever made that face at their child. It hasn’t happened and it will not happen. It’s impossible. So, I’ll ask again, who is this man? This man, who is he? Is he even a man at all? Or a Marks & Spencers mannequin magicked into life? Or, and bear with me here, is this just the clue we need to unravel this entire freaky mystery?

Let’s look at the first proper shot of in the video:

Hmm, strange. Why are we seeing that dream-like bright light, rather than the outside world.

Well, look what happens next:

Notice that even though the door is open even wider, you still can’t see a thing in the back. The child is literally emerging from a heavenly whiteness. It’s like whoever dreamed this up didn’t have the ability to imagine what was outside of this mystical garage…

So, Nintendo, why did you decide to make your Labo vehicle kit promo video about a child experiencing a post-traumatic incident fever dream?

It’s the only logical explanation, let me explain.

Only a youngster would think that putting a television in a garage is a good move – they have no concept of how much a decent TV actually costs. Plus, the strange collection of things all over the room? Definitely the work of a mind that has either never spent any time in a functioning garage or paid any attention to what’s really in them.

Also, looking at this kid, I’d say he’s on the cusp of puberty, explaining the latent sexual imagery running throughout the video. This revelation also goes some way to explaining the “100% totally a normal male human” who waltzes into the video halfway through. The imaginary nature of this gentleman – lifted straight from the middle of a Sears catalogue – also seems to suggest that this youngster has had a lack of strong masculine role models in his life.

Then, following this thread to its logical conclusion, the child in the video is having a hallucination most likely after the car he was in was hit by a plane carrying a submarine.

Look, I’m all for companies imbuing their promotional material with a bit more artistic flair, but, Nintendo, you do know this is a bit dark, right? You’re meant to be a family company, not a Lars von Trier movie.

I won’t be able to sleep tonight.

If you want to support more of this sort of art being made, the Labo vehicle kit will be out on the 14th September and will set you back $70. If you want one of the previous Labo kits, you can get the variety one here and the robot one here. Want a Switch so you can actual use them? Then go here my friend.

Read next: Name your price for this extensive project management training