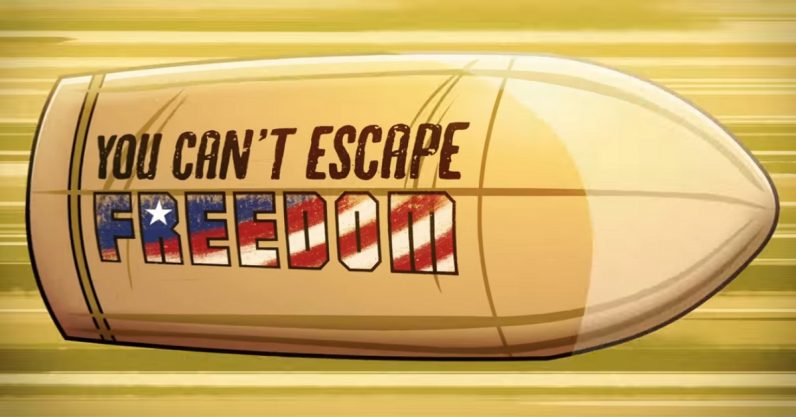 Independence Day is here, and I’m sure several American gamers out there are taking advantage of the holiday to sit down and enjoy a round of digital entertainment in between the barbecued ribs and the backyard fireworks show (assuming my neighborhood is a microcosm of the US population).

As long as you’re there, American gamers, why not have a turn on one of these games, which showcase a different facet of patriotism and are also fun enough to keep your attention.

If we’re going to do this, let’s start off strong — with a 2D run-and-gun game where you play muscle-bound bros gunning down those who threaten liberty and justice. Who cares if it’s an obvious parody created by a South African developer? It’s still hilarious and fun.

Let’s face it: for many of us, first-grade history was a long time ago. You may not recall who the 14th president was, but if you were allowed any free time in the computer lab in the 90s, you sure remember that dysentery was a common cause of death during the Westward expansion.

So if you want to take a crack at semi-historical depictions of America, what better way would there be than reliving this cheerfully joyless piece of gaming nostalgia. It’s currently available to play in-browser thanks to the Internet Archive.

Okay, I’m cheating a little bit here. Bioshock Infinite‘s relationship with American jingoism is a little frosty, to say the least. But if all you’re looking for a first-person shooter where you play an 80s American action hero, I think Duke Nukem is still around here somewhere. I honestly wouldn’t judge you.

I recommend Bioshock Infinite more for its critical, if unsubtle depiction of idealized American life and the suffering caused by the need for an unattainable paradise. And as long as I’m recommending patriotic games, I don’t think I can leave out the one with a robotic George Washington that carries a massive Gatling gun.

I’m on record calling this series “nonstop madcap action that makes [Grand Theft Auto] look as sober as a John Steinbeck novel.” I offer as evidence of that the fact that your former gang leader Player Character becomes President of the United States by riding a nuclear payload right in the damned Oval Office.

Look, I don’t think I’m spoiling anything by telling you the opening of the game involves President Boss jumping into an anti-aircraft gun (which rises from the White House lawn) and personally shooting down attacking aliens that have abducted most of their staff. Having told you that, I think you’ll either be all-in on this game’s All-American premise, or you won’t be.

I put this as an honorable mention because it’s never been technically released in the West. That said, it’d be hard to mention patriotic games without bringing up that game where the main character is the President in a mech suit fighting the evil Veep — and even that description is hardly doing it justice.

Created by From Software — yes, the Dark Souls people — the game is finally being brought the land of the people who can most appreciate it sometime later this year. Devolver Digital revealed the remastered edition at this year’s E3, and I think I’ll let President Wilson do the talking for me:

What games will you be playing today? Let us know in the comments.