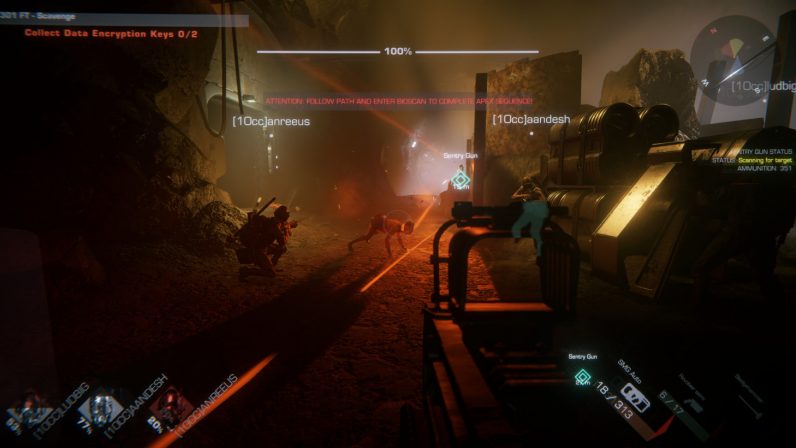 I’m talking about the kind of fear where your blood runs cold, and you feel every hair on the back of your neck stand up like pine trees in a forest. The kind of fear that makes you involuntarily hold your breath, and causes beads of sweat to build upon your forehead.

Off the top of my head, I can think of Doom, Alien: Isolation, Resident Evil 7: Biohazard, and Amnesia: The Dark Descent. That’s it.

It’s a small list, but it just got bigger, because earlier this week At Unity’s developer conference, Unite Berlin, I got to play 10 Chambers Collective‘s upcoming survival-horror title, GTFO.

GTFO is a four-player team-based FPS, similar to Left 4 Dead, but with a stronger emphasis on stealth, survival, and teamplay.

As one of the game’s developers, Ludvig Vikström, explained to me, if you approach the game guns-blazing, you die. If you don’t talk to your teammates, you die.

GTFO doesn’t have much of a story. You’re held captive by a shadowy autocrat called The Warden. On his command, you’re sent into a desolate environment packed with murderous mutated creatures in order to salvage technological relics.

You’ve got to get in, get the goods, and then get the fuck out. That’s easier said than done.

A brutal fight for survival

For starters, ammo and health are scarce.

You start the game with two firearms — a relatively weak primary weapon with plentiful ammo, and a more powerful secondary weapon which can only be fired a handful of times. Although health and ammo packs can be found throughout the levels, they’re few and far between.

If you approach GTFO like a traditional shooter, you’ll quickly find yourself running out of bullets. That’s when you die.

GTFO forces you to approach each confrontation carefully, and evaluate each steps as a team. Before you enter a new room, it’s not uncommon to spend a few minutes chatting through your options with your teammates.

Do you sneak past the dormant enemies, which are triggered by light and sound, and can summon more monsters if awoken? Do you silently take them out with a carefully planned melee blast? Or do you deploy some sentry turrets and lay a trap for the swarming bad guys?

The team dynamics of this are interesting. If you make a mistake, it affects the entire team, who quickly find themselves up to their nads in ultra-violent monsters. Their odds of making it to the end of the level are massively diminished as a result. You feel guilty.

You also have to communicate in order to solve problems. For example, during my playthrough, we were supposed to recover a keycard. In order to do that, one person had to stand in one room, hacking containers, while another person typed commands into a terminal in another room.

Getting the fuck out

By the time you’ve reached the gear you’re supposed to salvage, you’re in a bad way.

During my playthrough, my team were supposed to recover a decontamination unit. Our guns were down to their last few rounds, and we were hanging on by a thread. It was at this moment when GTFO decided to ratchet up the intensity.

Upon picking up the decontamination unit, the level was shrouded by an impenetrable fog, reducing visibility to just a few meters. A piercing alarm echoed, awakening all monsters, and summoning them to our location. Suddenly, we were in a fight for our lives.

I’ll tell you what happened next; we died. One by one, we fell, until eventually it was game over.

A masterclass in horror

GTFO is a multi-year effort from a team of genuinely talented artists and developers. It’s clear that they’ve spent a lot of time trying to build an experience that genuinely instills a sense of panic among players.

For starters, no two playthroughs are the same, as GTFO relies on a mix of scripted events and procedurally-generated content. This means that when you enter a room, you have no idea if it’ll be empty, or filled to the brim with monsters.

10 Chambers Collective has also been fairly creative with the monsters you face. The most common type is your typical grunt. These are plentiful, and don’t take much effort to kill.

Others are more fearsome. One adversary is completely blind and deaf, but will randomly send out a mass of tentacles in all directions. If one touches you, it’ll lash out and summon more bads.

Not only is this a unique and interesting approach in adversary design, but it’s also visually terrifying too. You see a white strand heading towards you, and you feel powerless to stop it. By the time you react, it’s too late.

Another lobs powerful fireballs, and is faintly reminiscent of Doom’s Imp, while another is a towering menace that can only be felled by shooting its limbs.

And then there’s the level design itself. The scenario I played was set in an abandoned, high-tech subterranean complex, filled with debris, and with little illumination. This created an atmosphere that inspired a constant underlying sense of trepidation that was impossible to escape.

GTFO will land on Steam later this year. If you ultimately decide to buy it, I recommend you play it with some good friends, and with the lights turned on to maximum brightness.