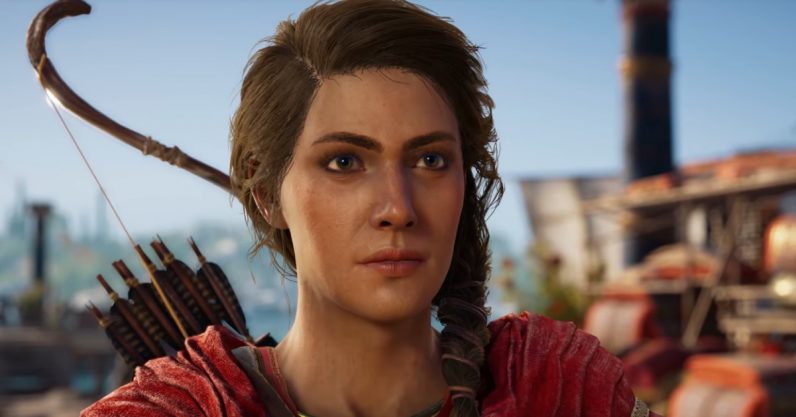 Yesterday, Ubisoft (officially) debuted the latest entry in its flagship Assassin’s Creed franchise: Odyssey, an action RPG set in Greece during the Peloponnesian War. The gameplay revealed on-stage during the E3 show, including the names of our two protagonists.

That’s right, the rumors were true: in AC Odyssey, you can play as either a man, Alexios, or a woman, Kassandra. And, speaking as a longtime fan of the series, it’s a pleasure to see a Grecian Amazon like Kassandra grace the E3 gameplay demo. After sticking with this series for ten years, I’m beyond happy to see what might be the series’ strongest, most charismatic female lead to date.

Ah ah, get your fingers away from that keyboard. I’m aware the series has had reasonably enjoyable female protagonists so far. We’ve had Aveline from Liberation, Evie from Syndicate, even Aya from Origins to a slight degree. All of them were respectable characters in their own right. What Kassandra has that they don’t is both demonstrable power and star billing.

Understand: when I say strong, I mean strong. Not just in the nebulous sense of having great personal fortitude, but a woman with impressive presence, raw physical strength, and the guts to back up what they say. It’s what everyone loved about Ezio — he could both talk the talk and walk the walk.

Evie had to share screen time with her idiot brother. Aya might have been great if she’d been playable for longer than twenty minutes. Aveline is my favorite of the three, but the brevity of her game, a side-story originally made for the PS Vita, made her come across as flat. Seeing her successor get a main game all to herself (almost; I still haven’t forgotten Alexios), is gratifying.

Kassandra and what she represents may have been the most positive new addition, but she’s by no means the only one. The inclusion of a dialogue wheel feels curiously out of place in the notoriously linear series, but, humorously, there’s a Mass Effect-style flirt option in one of the conversations show in the gameplay demo. It’s even marked with a little heart.

Otherwise, much of the combat, travel, and lavish Mediterranean scenery looks like it’s lifted from AC: Origins. That’s not a bad thing — Origins was the best of the series’ most recent entries by far. While I can’t say I’m entirely pleased the series has fully morphed from “linear historical stealth game” to “historical action RPG,” at least they’ve given players the option of playing as a powerful warrior woman like Kassandra.

Read next: Sandbox VR lets you kill zombies with friends for your next party