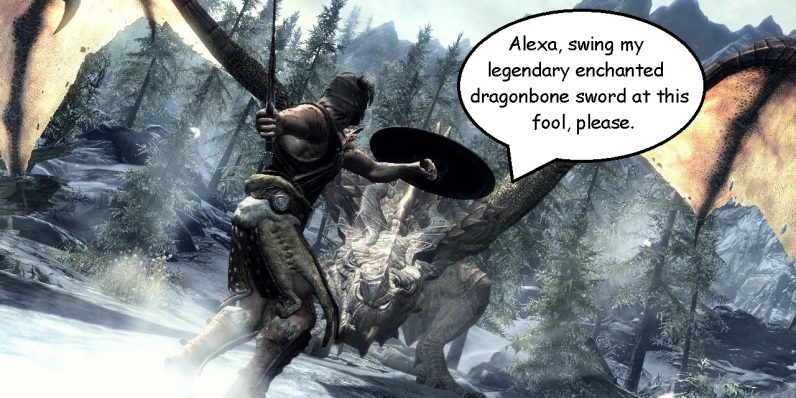 Todd Howard made a joke at this year’s E3 about releasing Skyrim on Alexa and then Bethesda actually made it real — and I, the Skyrim curmudgeon, completely give up.

In between Todd Howard, Bethesda Game Studios exec, dating himself and mispronouncing “nuclear” on stage at the company’s E3 show, he also took the time to make fun of himself for his own near-constant announcements of The Elder Scrolls V: Skyrim. No kidding, he actually said, “We know most of you came here for one thing… I think it’s to see where we’re putting Skyrim next.”

At that point, the show stopped cold for a spoof trailer in which Keegan Michael Key played Skyrim on Alexa, to great amusement. The trailer went on to say Skyrim was also coming to Etch-A-Sketches, pagers, and smart fridges.

Cute, clean fun — even if I couldn’t shake the feeling it was being had at my expense specifically given my past complaints. Although I did notice the Dragon Shout Key uses that switches on his fridge’s ice maker was the Ice Form shout, which actually did make me crack a smile.

Any sane mind would think that’d be the end of that. The trailer was obviously a parody, right?

I’ve been accused by some of my own colleagues (y’all know who you are) of “hating Skyrim,” because apparently it’s hating a game to just want it to go away for a while. I logged 300+ hours into Skyrim. The only time I ever spent that long on something I hated was in middle school.

Now that you know this doesn’t come from a place of genuine vitriol, I’ll say this: Bethesda, it’s not a joke if you actually do it. This looked like a joke, sounded like a joke, and had all the trimmings of a joke. Even the description sounds like it’s daring you to take it seriously:

Prepare to:
● Encounter people who constantly need your help
● Guard your knees against arrows
● Walk straight up a mountain instead of going around
● Fail to collect all stones of Barenziah for like the 5th time
● Open wooden doors
● Open iron doors
● Other epic things
● And more!

Thing is, it’s not a joke. The game actually works (even if it’s US-only, judging by the reviews). To Bethesda’s credit, it also seems to work well. While I don’t have an Alexa speaker myself, a few others have managed to play primitive versions of the game with Alexa, who seems to have an especially snarky attitude with the player.

I guess the only thing we can take away from this is that Skyrim is actually coming to smart fridges. At this point, all I can say is: have fun, you crazy Skyrim-loving Dovahkiin. Just do yourself a solid and don’t use the Ice Form shout.

Read next: The Fitbit Ace, a fitness tracker for your kids, is now available for $100