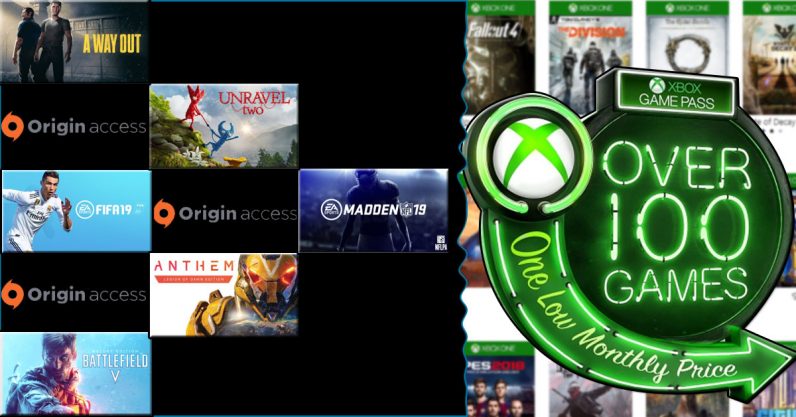 Two titans of gaming, EA and Microsoft, revealed updates to their respective subscription services that should appeal to hardcore gamers. Both companies committed to releasing their major first-party titles – the big games like Halo and Madden – on their subscription services at the same time as the worldwide launch.

Microsoft yesterday announced that every first-party Xbox One game its publishing arm puts out will launch on its Xbox Game Pass service.  The company actually announced this back in January, but since that time the only major titles to launch on the service were State of Decay 2 and Sea of Thieves, until now future releases have remained unconfirmed. Now we have a roadmap for future launches. It also announced the acquisition of five new studios, an upcoming cloud streaming service, and a machine learning update that allows games to download twice as fast from Game Pass — the gist of its E3 presence seemed to be that the Xbox team believes streaming is the future.

The Xbox Game Pass costs $9.99 a month, but you can get your first month for $1 during the week of E3. Its titles include upcoming games such as Halo Infinite, Gears of War 5, and Forza Horizon 4. It also includes over 100 currently released titles.

Prior to the announcement, its greatest value was probably for newcomers to the Xbox console. It’s nice to have a library of games at your disposal, but hardcore gamers don’t want to wait months or years to play a new game. Now, the value is actually quite impressive.

Basically, if you’re going to spend more than $120 on Microsoft titles in the next year, you should just get a subscription to Game Pass. You’ll get whatever first-party games you were going to buy, and access to all the ones you weren’t, also.

Microsoft also announced it’s working on a streaming service that will, unlike Game Pass, let you play games without downloading them. The company says it’s going to bring console quality games to any device – meaning you’ll be playing your games from the cloud and saying goodbye to downloads for good. We’re at least a couple years away from that, so for now we’ll take the fantastic updates to Xbox Game Pass.

EA, though mum about it’s EA Access subscription service for Xbox One, is giving PC gamers a subscription that’s hard to say no to, provided you like EA’s games.

Its recently announced Origin Access Premier will, like Microsoft’s subscription service, include access to newly launched EA titles. And that means FIFA 19, Madden 19, Battlefield V, and Anthem will all be available on PC, at launch, for subscribers. It’s unclear if the every EA title will appear in the service, or if it’s only select games.

Origin Access, in its current non-premium iteration, costs $5 but doesn’t include full access to new titles. Access members get a limited demo, usually 10 hours, for new games. With the Premier subscription they’ll receive complete access to those titles at launch — it’ll cost $15 monthly or $99 annually. EA says it will launch the Premier option “this summer.”

Both of these pack a tremendous value for gamers who chew through content. It’s much easier to determine what kind of value you’ll get out these services when you have a reasonable expectation of what will launch for them.

I know I’ll be playing FIFA 19 and Madden 19, so Origin Access Premier is a no-brainer — it’s $20 cheaper than buying the games separate. And I’ll definitely be playing more than $120 worth of Microsoft first party games, so it’s also a financially responsible decision to subscribe to Game Pass as well.

Expect to see more of these kinds of services popping up as Sony and Nintendo could move to provide more value in their respective subscription offerings.

The streaming wars have begun in the gaming world, and that’s good for gamers.

Update 11:22 AM CST 6/12/2018: Changes made to reflect the announcement that Microsoft’s Xbox Game Pass would launch all first party titles alongside the worldwide release was actually made in January. And both Sea Of Thieves and State of Decay 2 were available on the service at launch.

Read next: Facebook's 'On This Day' is now 'Memories' and we still think it's pointless