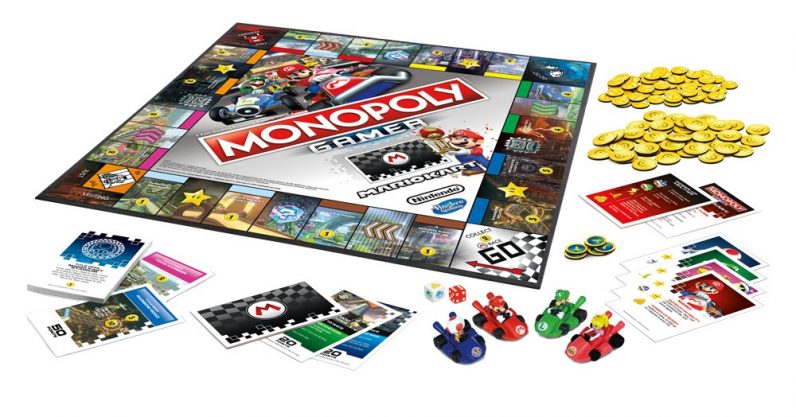 The board game is designed to mimic certain features from Mario Kart, putting shells, coins, and ending when the race is over. For example, individual pieces also receive different power-ups for different tiles, such as Toad collecting coins from everyone else when he passes Go. I sincerely hope Mario and Luigi get some kind of special power-up on Water Works tile.

I’m not sure what brought the combination about, other than Monopoly and Mario Kart are both popular and lucrative. If that’s the case, then I don’t follow the logic. Donuts and sushi are both popular too, but I don’t want to combine the two of them unless I needed a stomachache in a hurry.

Monopoly itself is a bit of a contradiction. The game’s creator, Lizzie Magie, originally designed proto-Monopoly as an indictment of concentrated wealth made at the expense of the people (ironically making nothing from the idea herself). That’s probably lost on most, since the current iteration of the game is all about accruing as much wealth as possible and crushing your opponents.

I know Nintendo is hardly the first company to slap a skin of their intellectual property over a board game that is simultaneously an indictment of and argument for ruthless greed and exploitation. It’s not even the first time they’ve done it with Mario.

But something about seeing the charming, innocent world of Mario Kart — where Mario’s world is stripped of even its mild social commentary in favor of showing Mario and friends enjoying a hobby — on Monopoly is just wrong. It makes the brain itch.

The Latest Twist On Monopoly Is... Mario Kart on Kotaku

Read next: We salute the developer who created an Alexa-controlled robot tank to deliver his beer