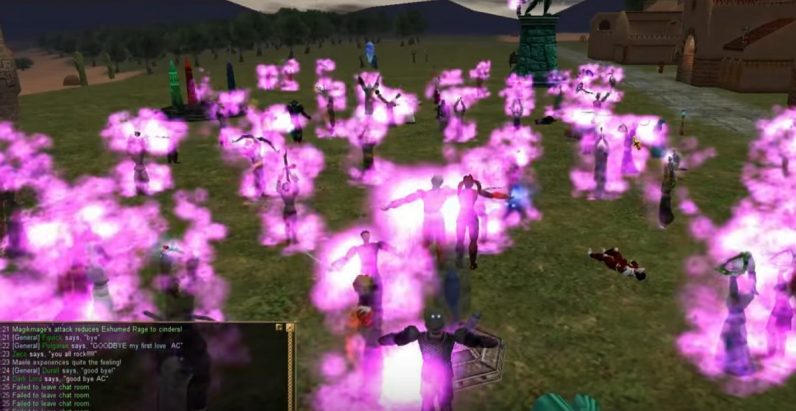 Fans of abandoned online games are close to bringing back certain “dead” titles — if the US Copyright Office doesn’t side with the studios, who this week began pushing back against their efforts.

The US Copyright Office, which oversees the Digital Millennium Copyright Act (DMCA), renews its provisions every three years. These provisions include the specific rules which criminalize any attempts to circumvent copyright protection, and the exemptions to those rules. During the renewal, it takes public comment and petitions on whether any new exemptions should be made.

A new comment, submitted last October by the Museum of Art and Digital Entertainment (MADE), asked the Copyright Office to make an exemption to the DMCA for “abandoned” online games. If granted, it would mean that museums and archives would be able to run their own servers for these games, essentially resurrecting them for small-but-devoted fanbases.

The MADE emphasized how important these games would be for understanding the history of the medium:

For future historians, video games like Minecraft and Second Life will say as much about 21st  century America as Dicken’s Oliver Twist does about 19th-century Britain. That is, if these games actually survive into the future. Unfortunately, video game preservation lags far behind other media and is impaired by technological challenges and legal limitations. … So, despite their ever-growing cultural importance, online video games continue to turn into digital dust when their copyright owners cease to provide access to an external server necessary for the game to function—i.e., when these games are “abandoned.”

To be clear, there’s already a DMCA exemption in place for abandoned games that are stored within the gamer’s own console or computer. Granted in 2015, it allows users to modify their games to eliminate the need for an authentication server from the company. Museums and libraries would even be allowed to jailbreak consoles to get games working under this exemption.

However, the Librarian of Congress, who oversees the Copyright Office, wouldn’t extend the protection to online multiplayer games at that time. According to the Electronic Frontier Foundation, who rallied for the exemption, the Librarian stated that doing so would violate rules that prevent anyone from selling circumvention software. In theory, you’d have to sell or traffic in some kind of software which would allow multiple online users to play abandoned games.

Game companies are pushing back against the idea. The Entertainment Software Association (ESA), which represents multiple game publishers, filed an opposition comment, saying that publishers do preserve old games under the current exemption via the retro games market. Specifically, it cited the remastered Crash Bandicoot game and the rerelease of Call of Duty: Modern Warfare. It also points out that MADE, a non-profit, charges a $10 admission fee to play its games, meaning any servers it hosts will fall under commercial use.

A separate comment, filed by the ESA, the Motion Picture Association, the Recording Industry Association, and the Association of American Publishers, complained that the MADE isn’t interested in preservation, just in allowing users to keep playing:

The petition and comments from proponents in the current record do not establish that these efforts are insufficient with respect to preserving video games. In fact, the petitioner’s proposed class appears to enable recreational video game play, including by numerous museum “affiliates,” rather than preservation strictly for academic purposes.

Personally, while I understand the ESA’s reservations, I think it’s important to allow access to older games, and game companies haven’t proven to me that their interest in the retro market goes beyond remastering and rereleasing. And online games can’t really be preserved or understood in their context if you aren’t allowed to, you know, play them online. So having a preservation society host online servers would give hobbyists and interested amateurs a chance to experience the game in its original state.