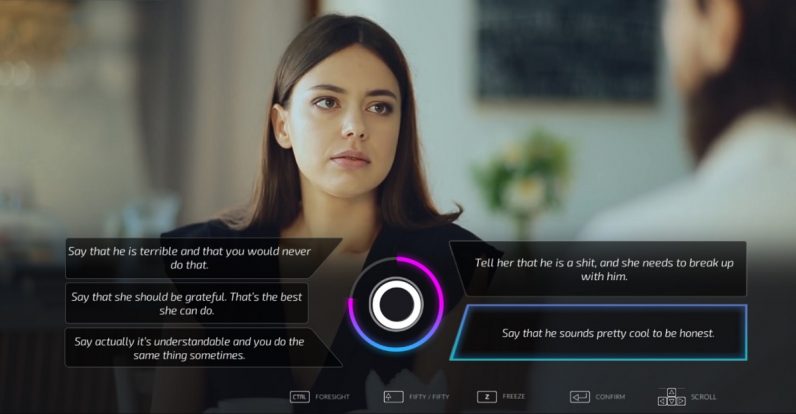 A game called Super Seducer just oozed onto the Steam market. It’s a game in which a self-proclaimed “seduction guru” shows men the way to a woman’s heart through the use of a Mass Effect dialog wheel and a whole fuckton (no pun intended) of mumble-y acting.

Said guru, Richard La Ruina, sets up a series of scenarios in which the player will have to talk to women, from playing wingman in the bar to bothering a stranger on the sidewalk. I hope you like looking at La Ruina’s face, because you’ll be seeing a lot of it as you watch him use his moves on a variety of in-game women.

A game called “Super Seducer” was always going to be laughed at no matter what. The game could be a gold leaf-covered sundae of positivity, consent, and tasteful nudity and it would still get laughed right off the figurative stage. Unless the game stars the free-swinging muscle boys from Mount Your Friends with giant SSes painted on their chests, it couldn’t possibly be tongue-in-cheek enough to justify that title.

The game offers men (I presume men, as there’s no mention of queer women in any info about the game) room to fail, as well. Some of the trailer footage shows women reacting to the man in horror, calling him disgusting, or just plain tuning him out, so I guess they’re making some noises towards realism. One sharp-tongued blonde put him in a judo hold and threatened to tear his arm off, which warmed my heart right up.

I don’t want to flatly dismiss a game that might be trying to give a positive message about consent and love, but the scenarios it envisions aren’t made up of things real people would say or do (arm-tearing being the obvious exception). To quote Mark Twain, “it has no lifelikeness, no thrill, no stir, no seeming of reality,” so it isn’t going to help the poor people who are going to try and bring the methods here into the real world.

The game was funded on Kickstarter last year, until it was suspended from the site for “inappropriate content, including but not limited to offensive or pornographic material.”

I could probably bend your ear for hours at a stretch explaining how women aren’t Rubik’s Cubes, solvable with the correct series of intricate twists made while thinking five steps ahead of yourself. Or I could show you a series of selfies that show my cringing reactions to La Ruina “seducing” the actresses with all the elegance of a breeding hog. But I don’t even need to go that far to turn you off of the game. All I need to tell you is — are you sitting down? — it’s a full-motion video (FMV) game.

Now, there have been a few FMV games of quality — the Jedi Knight series and HERStory spring to mind. But this just feels like the kind of cheesy, awkward production that gave FMV a bad rep in the first place.

The game officially releases on March 6. If you can’t wait that long and absolutely must play a game in which you seduce beautiful women, may I suggest Huniepop? It’s actually funny and charming in its sleaziness, and doesn’t make any pretense of educating you (but probably will still teach you just as much about the feminine mystique as Super Seducer).

Read next: Create your own AI-powered voice assistant with Matrix Voice