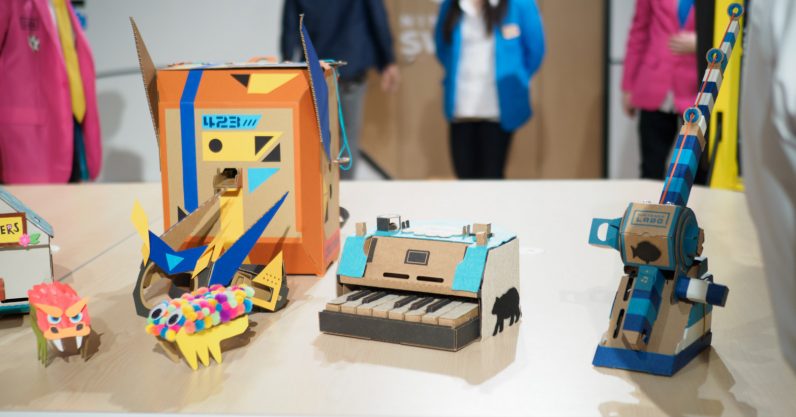 I have no shame in admitting I’m a Nintendo fanboy. Nintendo consoles are the first connected to my TV every generation, and creative approaches to gaming like Labo are the reason why.

If you haven’t been following, Labo is Nintendo’s zany idea to use cardboard cutouts to build elaborate, game-specific accessories. Remember Google Cardboard? It’s kind of like that, on steroids.

I was able to experience 6 of these accessories, dubbed Toy-Cons, at an event in New York:

And they all work fantastically well. You know, considering they’re made almost entirely out of paper.

Part of what makes Labo so satisfying is the fact that you have to fold and assemble each Toy Con yourself. Or with a friend; we each had a partner during the event. I only had the opportunity to build the RC car and (most) of the fishing rod, but we got to try out each experience in a separate room.

Knowing you’re supposed to somehow make a fishing rod with moving parts out five pieces of cardboard feels absurd at first, but following the instructions on the Switch’s screen makes it easy. My partner and I eventually got a hang of the patterns, and only really had to look a the screen for the occasional push in the right direction.

The software is designed to make you feel like the building process is part of the game itself; completing each major component of a Toy Con felt like beating a level in a traditional videogame, complete with a congratulatory message on the Switch’s screen. Judging by general merriment in the room, other journalists were having fun too.

And like Nintendo’s games, there’s a sublime display of ingenuity. The RC car moves simply with the vibration of each Joy Con, and they’re designed to do battle by flipping your opponent over. More impressive, they can even be set to follow you by using the infrared sensor as a thermal camera.

The fishing rod is divided into multiple telescopic sections, and Nintendo uses a tiny piece of cardboard to simulate a the clicking noise in an actual fishing reel. It’s that Nintendo-like attention to detail.

Every Toy Con I tried worked almost freakishly well. The Piano supports multiple voices and even has a pitch bend lever. The Motorycle has a responsive, twistable throttle and uses the accelerometer to let you pop a wheelie.

Then there’s the robot suit, which is probably about as close to feeling like your mecha pilot of choice. You need to strap pieces of string and cardboard around your feet and wrists, different stances allow you to access differnt abilities, like flying or turning into a car. You look around by moving your cardboard visor.

Another neat tidbit: Nintendo announced it’s offering a Toy-Con garage, where enterprising DIYers will be able to create their own minigames and accessories.

The variety and cleverness of the Toy Cons meant each experience was surprisingly immersive. But that’s also why I was left wanting for more. Each Toy-Cons is basically an accessory for a Mario Party-esque minigame. Elaborate, DIY, minigames, but minigames nonetheless.

There isn’t really anything wrong with that; Labo is obviously aimed at pre-teens and younger. But the ingenuity on display made me wonder what Nintendo could achieve with a complete title, or at least something a bit more substantial. Frankly, I’d love to be able to optionally use some of these accessories in a Zelda or Mario game.

Labo also isn’t entirely practical. The more elaborate the mechanism, the longer it takes to build. Though every Toy-Con felt surprisingly sturdy, they are made of paper and will likely deterioriate after a few uses.

These caveats make me wonder how long Labo will stick around for. Still, the fact Nintendo is even willing to try such an idea is just the latest proof it’s is the most innovative company in the industry. Even after the Switch already redefined console gaming, Nintendo’s found a way to create entirely new gaming experiences.

All you need is a little bit of paper.

Read next: Google taught AI to multitask with an intense gaming sesh