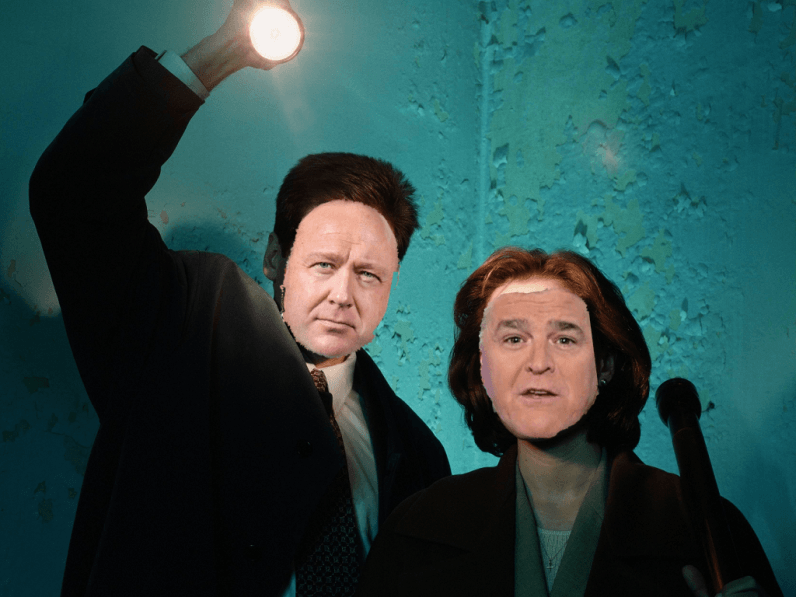 Over its initial nine-year run, the X-Files caused more adults to shit their pants than Chipotle ever has, thanks to its iconic blend of intrigue and sci-fi horror. Now, it’s in the midst of a revival.

To coincide with the show’s eleventh season, developer Creative Mobile has launched a new officially licensed game called X-Files: Deep State, available for iOS, Android, and Facebook Gamesroom. But is it any good? The truth is out there.

X-Files: Deep State doesn’t take you across one long, contiguous story arc. Rather, it consists of independent episodes, each centered around a mystery containing a hidden paranormal element. For example, the prologue throws you into a murder case. There’s a high powered district attorney with her head bashed in, and you’ve got to find whodunnit.

But quickly you find that things aren’t as they seem. Suspicion that this isn’t a typical home invasion emerges when you notice that the window used to access the property was broken from the inside. Dig a little deeper and you find a family at breaking point, and a young child with unexplained supernatural powers.

There are five episodes to play, plus the prologue, and the makers have promised to add additional episodes through updates.

I found the stories remarkably fleshed out for a free-to-play game, and there’s a tremendous amount of depth to explore. Episodes are multi-layered, and there’s a genuine element of mystery. Just like Mulder and Sculley, if you want to get to the bottom of the case, you have to dig deep. 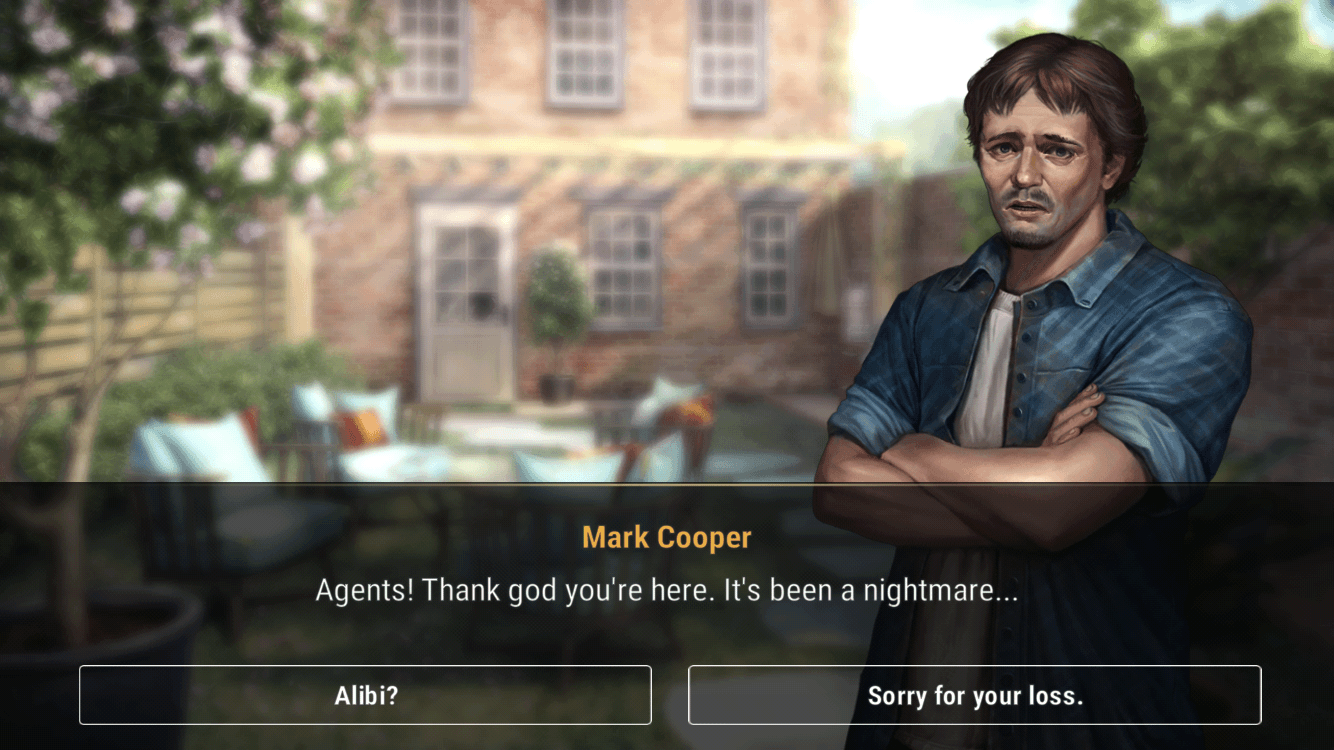 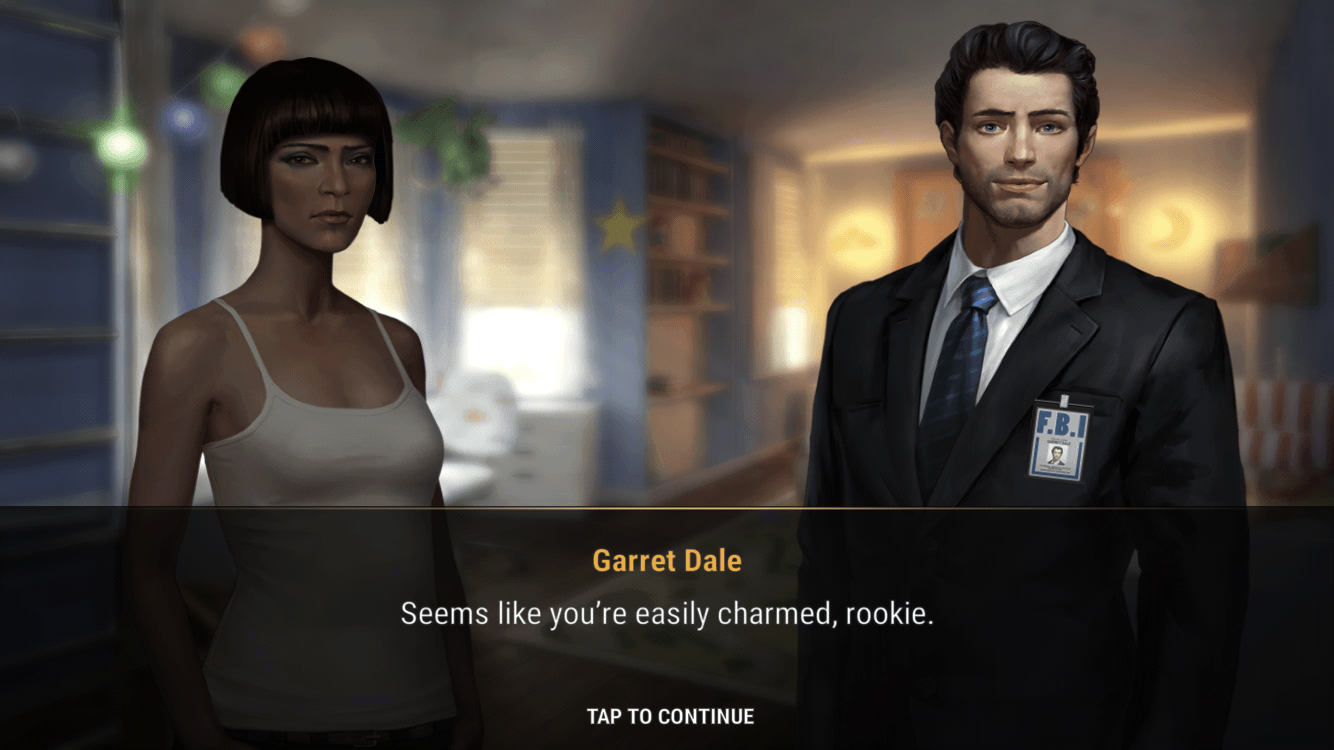 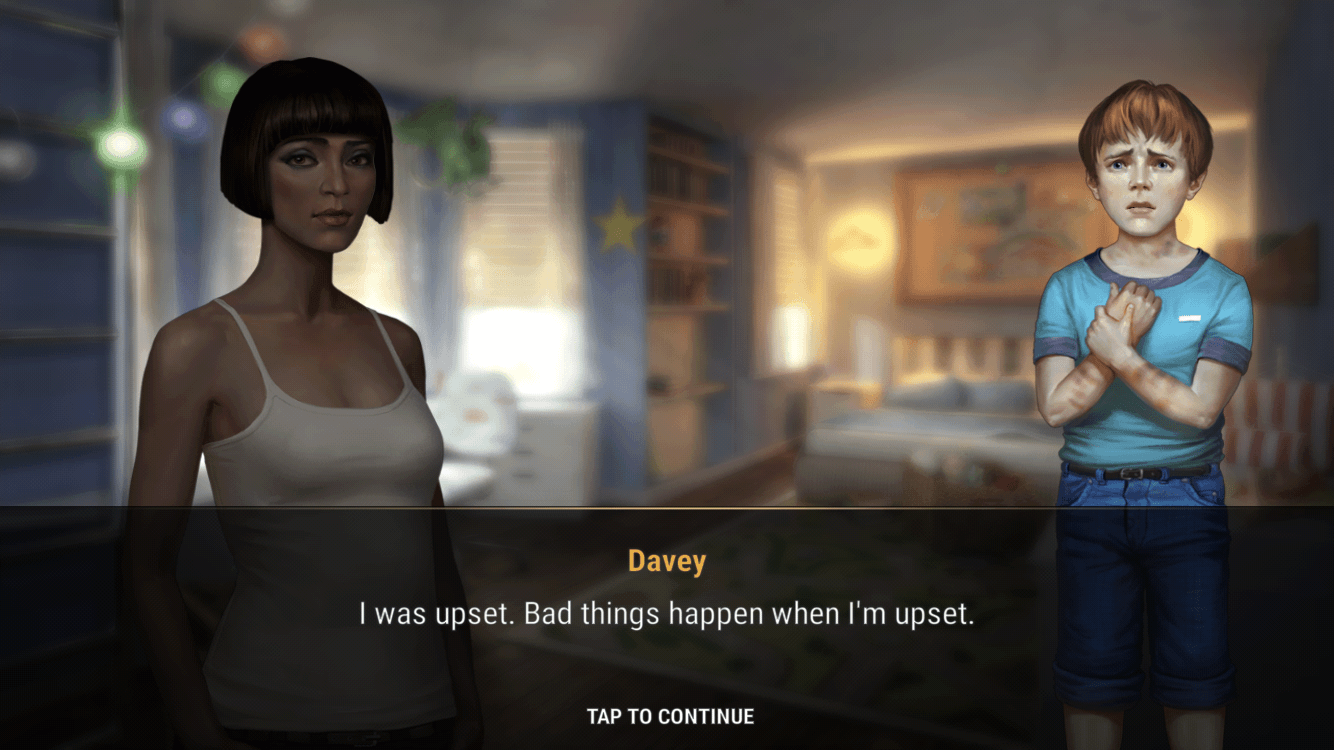 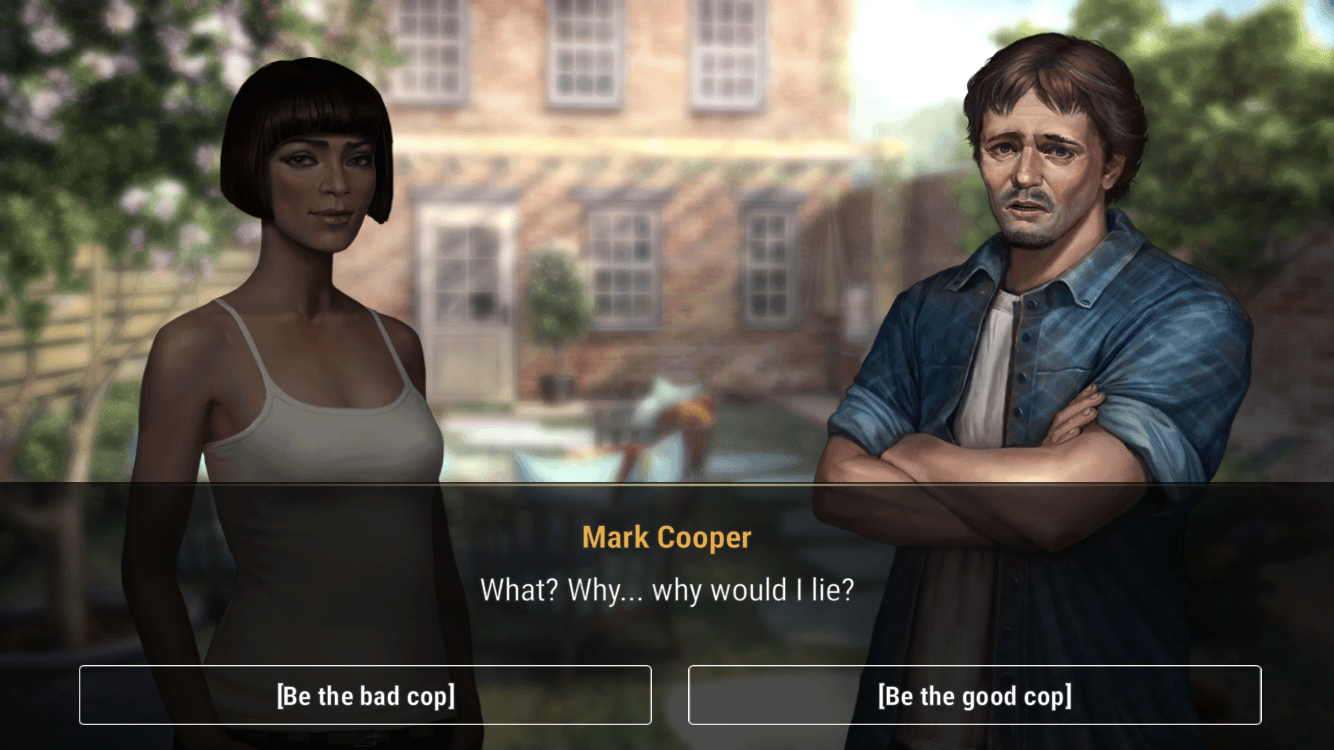 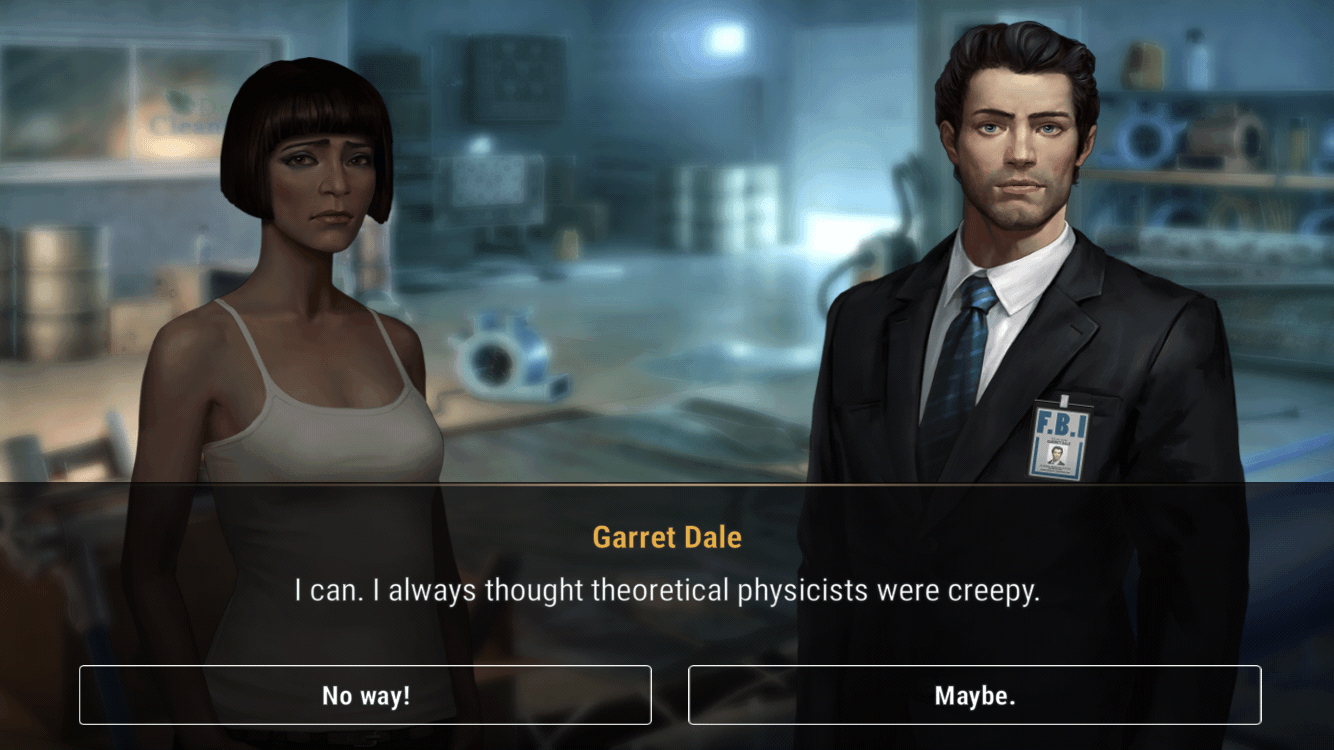 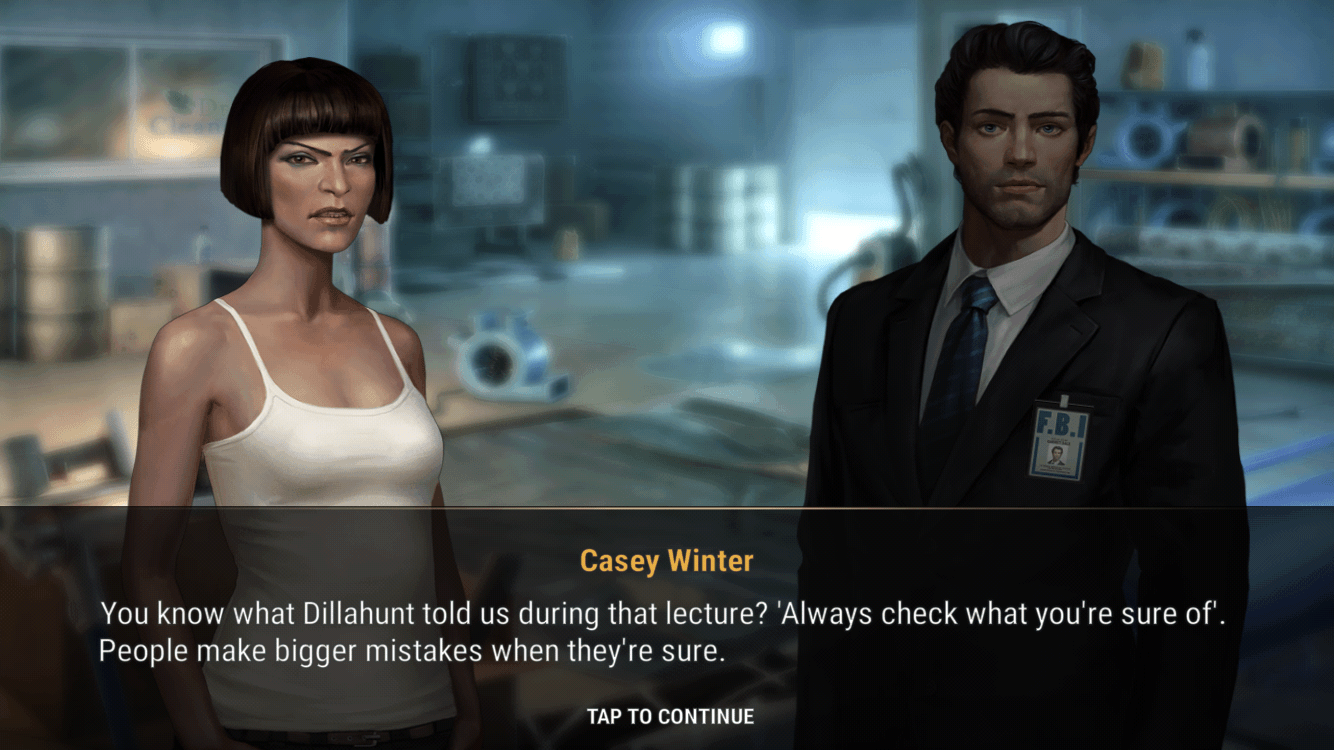 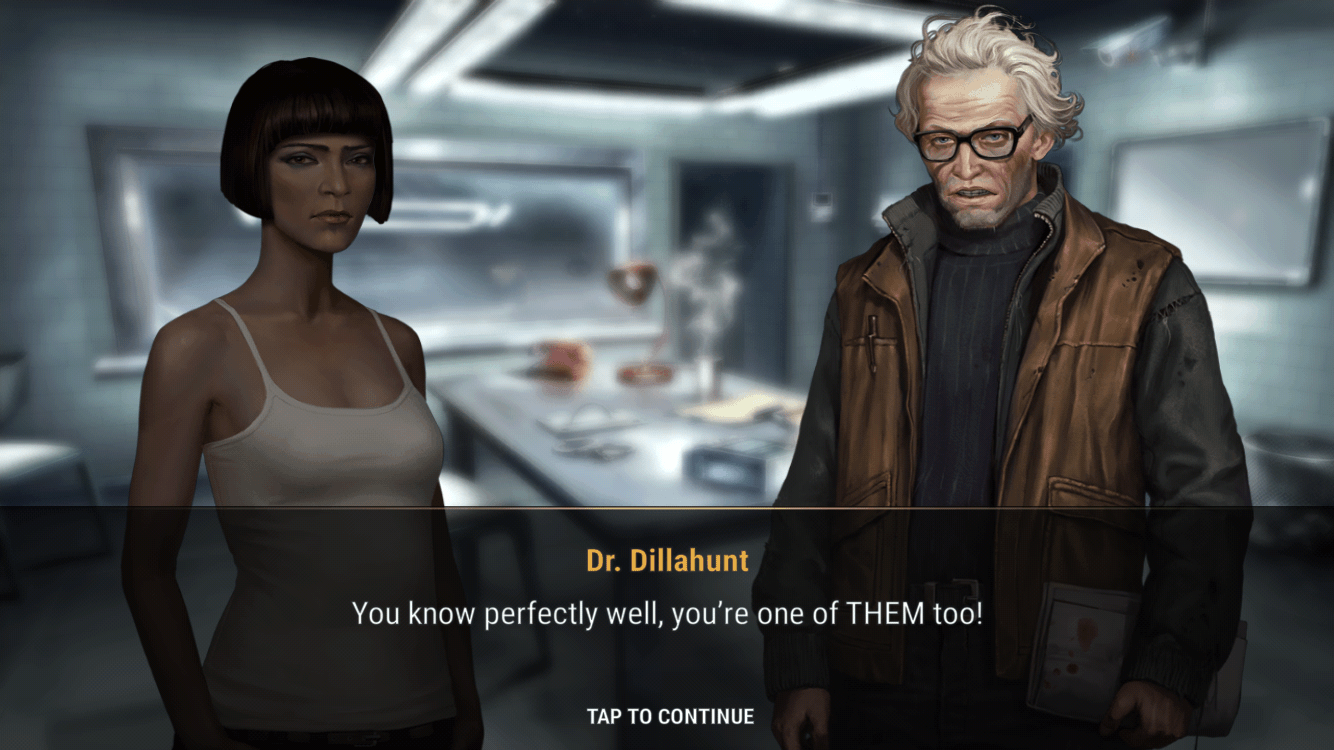 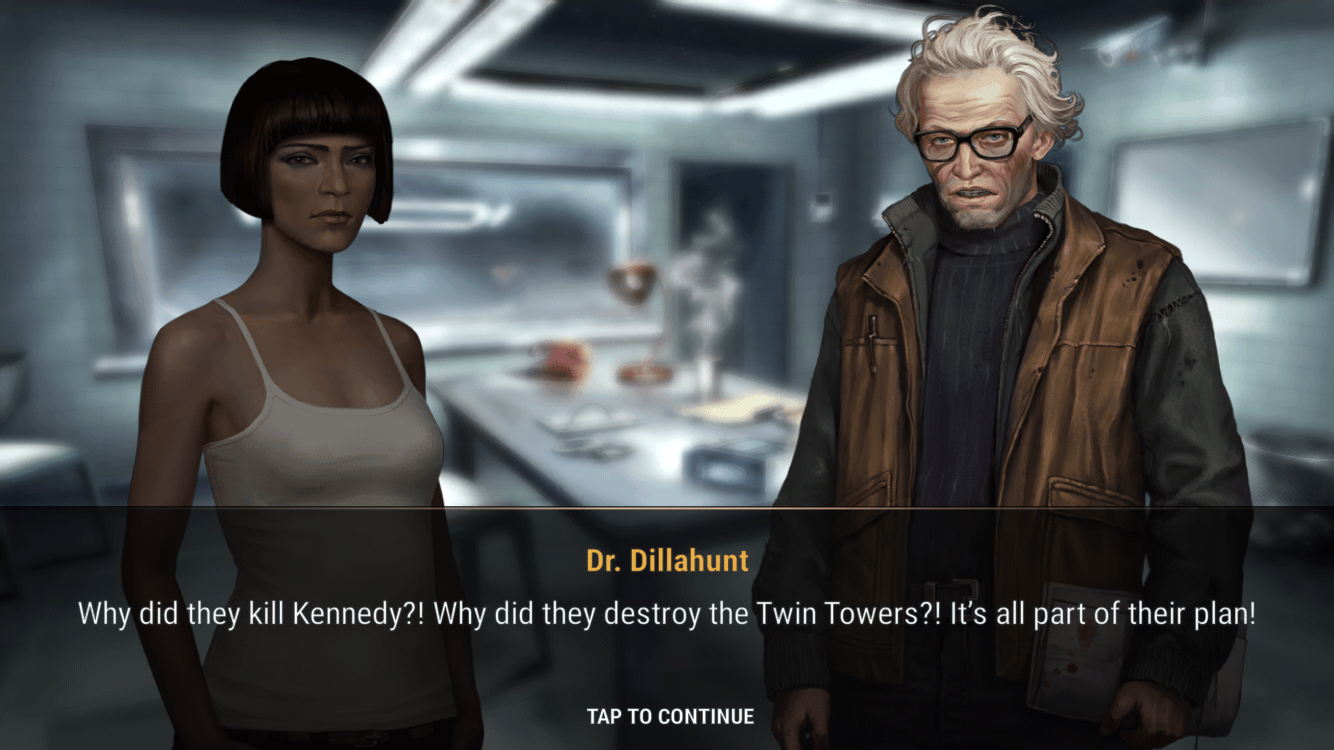 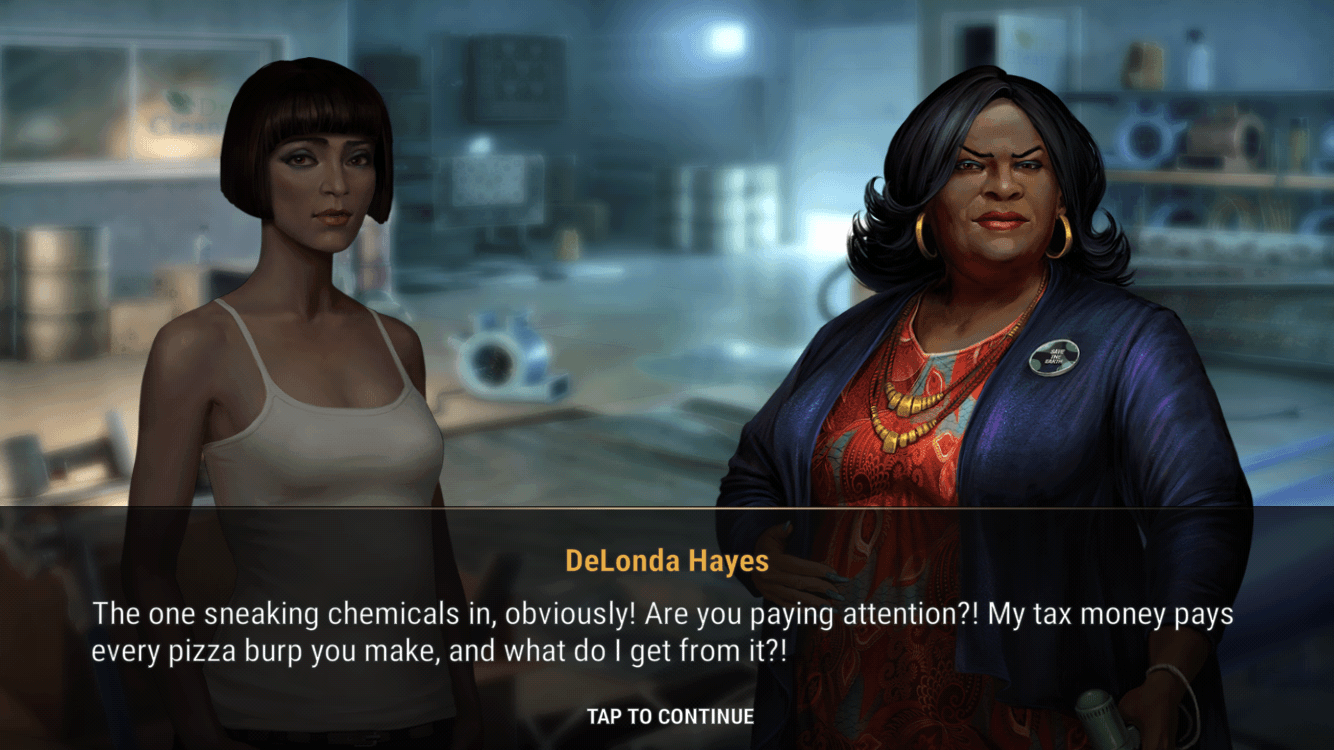 Later episodes are darker, and introduce elements of government conspiracy, hence the “Deep State” bit. The deep state is an increasingly mainstream conspiracy theory espoused by talk show hosts Alex Jones and Sean Hannity (crudely depicted as Mulder and Scully in the above featured image) which argues elements of the US government are acting in parallel to elected officials.

The writing often feels hackneyed, however. The narrative is entirely by dialogue choices, and your partner, Garrett Dale, tries to play the part of a wisecracking hardened agent. The banter doesn’t really work though.

Speaking of Dale, every time you sweep a crime scene, you’re presented with this awkwardly-grimacing face giving you a thumbs up. Perhaps Agent Dale was a used car salesman in a previous life?

This brings me nicely onto gameplay, which is my biggest disappointment with X-Files: Deep State. To progress in cases, you have to solve several mini-game puzzles.

These are often as simple as finding items within a picture, identifying patterns, or taping a torn-up photograph back together. There’s no suspense or skill required, and it feels extremely passive.

These are the type of sedate challenges you’d play to unwind before heading to bed. I can imagine this being acceptable for a freemium game attached to literally any other franchise, but not the X-Files.

Y’know. The X-Files. The show that had an episode so scary and controversial, Fox waited three years to re-air it, and only did so as a Halloween special.

Annoyingly, you’ve got to complete these games in order to progress. And I don’t mean just once. Some story-essential challenges require you to accumulate stars. To do that, you’ve got to replay mini-games again and again.

This is tedious, and it makes the story — which is arguably the strongest facet of X-Files: Deep State — feel halting and detached. It entirely dispels any suspense you’d get from the narrative.

As you’d expect, microtransactions are everywhere. Every couple of challenges, you’re presented with the option to buy a lootbox or power-up. Some challenges force you to either wait, or pay an amount of in-game currency to continue. Although the game is playable without opening your wallet, you’ll probably have a better, less frustrating experience if you do. 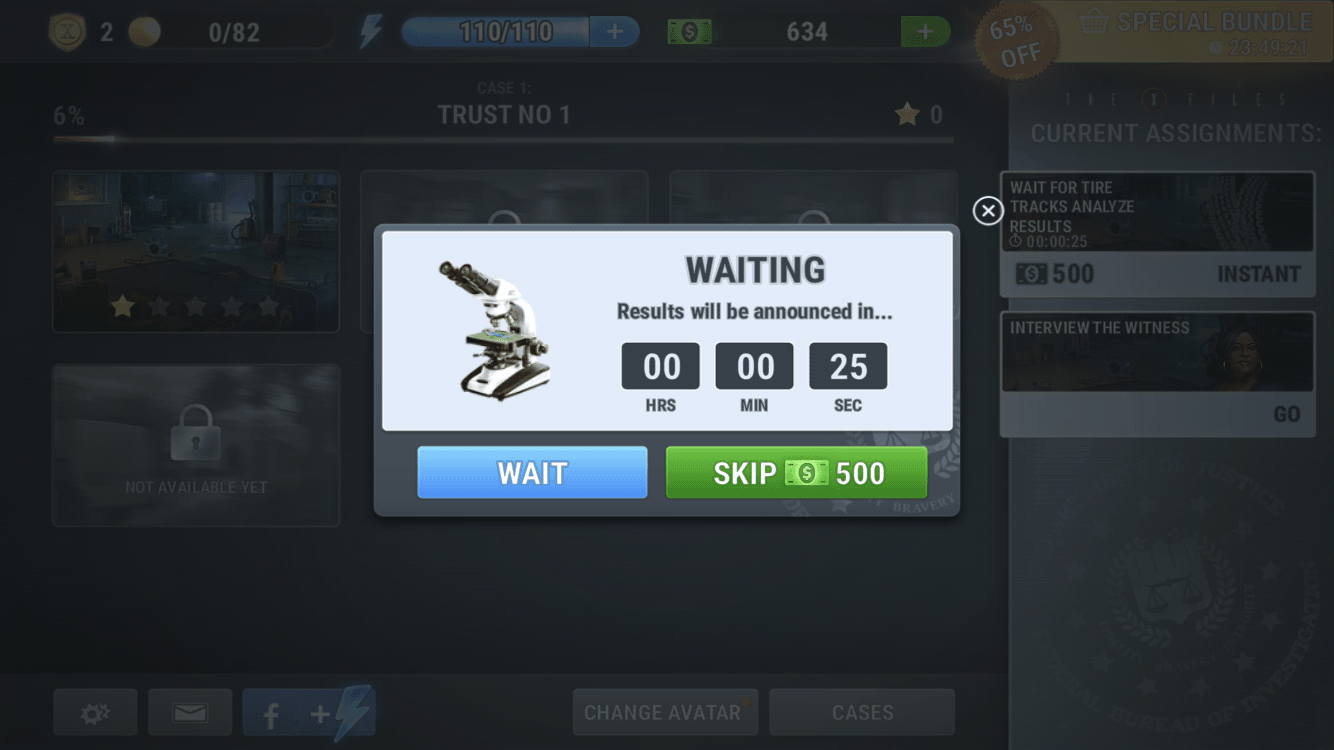 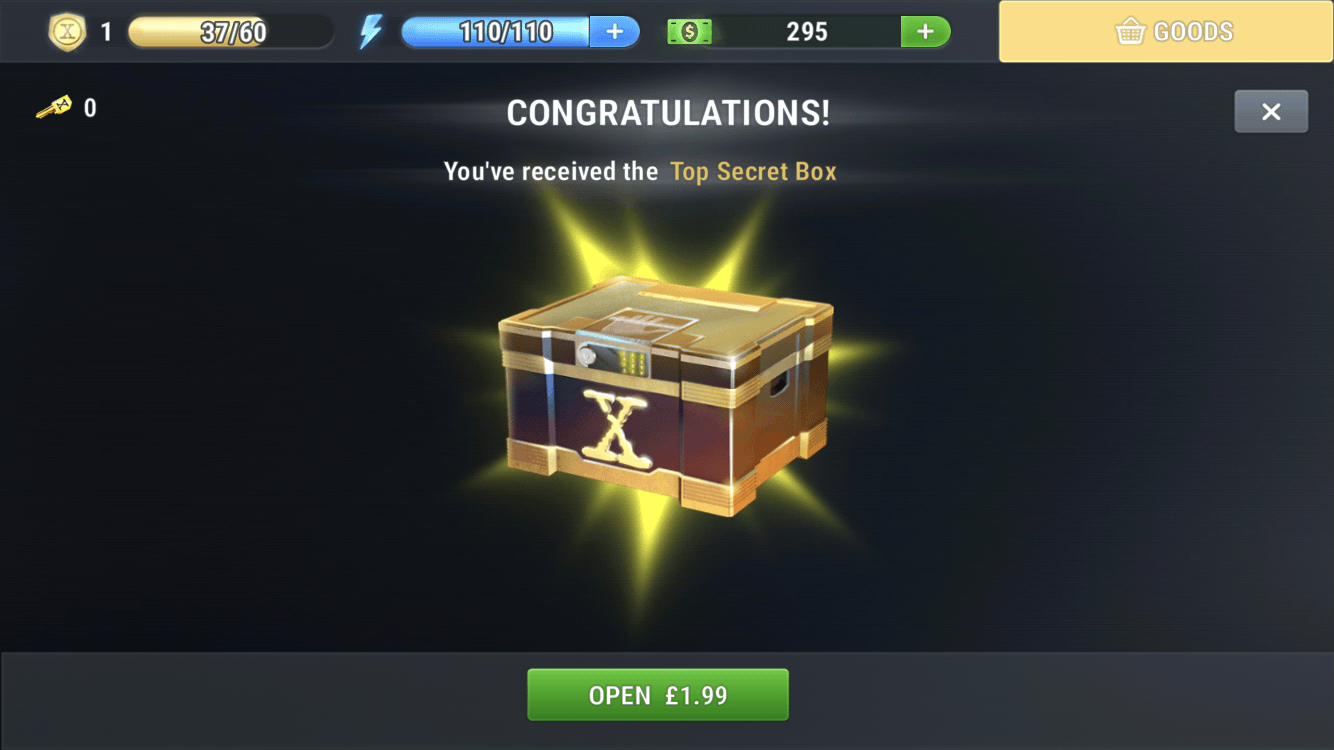 In many respects, I feel as though X-Files: Deep State is a victim of the free-to-play model. If the makers ditched the unnecessary repetition of the mini-games, focused more on the story line, and charged a few bucks instead of micropayments, you’d have a game not too dissimilar to what Telltale’s doing with other franchises, like The Walking Dead and Batman.

Or maybe even the original The X-Files Game, which was an interactive fiction masterpiece from the 1990’s.

You don’t need to be an FBI agent to see I’m pretty underwhelmed by The X-Files: Deep State. There were things I liked, namely the artwork and the writing, but overall if feels like such a missed opportunity. With arguably the most terrifying TV show ever made, the makers had such an amazing trough of source material to work from. They could have done so much more.

But if you’re curious and want to try for yourself, you can play it here.

Read next: A beginner’s guide to investigative data journalism