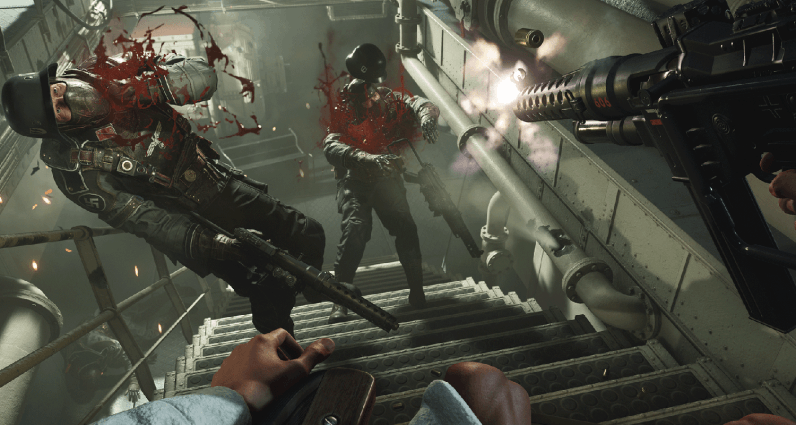 Bethesda’s “Wolfenstein II: The New Colossus” is almost out and that means only one thing: It’s time to kill some Nazis!

After one of the best marketing campaigns I’ve ever seen, the expectations were pretty high, but this shiny shooter has more substance than you’d think and, dare I say it, beyond the blood and guts there’s some real art to be found. There’s also more than a little social commentary (and controversy) surrounding the game.

The game takes players on a first-person shooting experience that has them fighting Nazis across a variety of familiar American locations. With the alternate history enfranchised in the Wolfenstein series on full display, the Nazi machine has conquered America and it’s up to our heroes to overthrow the evil regime.

First things first, the technical aspects of the game are off the chain. It looks gorgeous and my first impression was “take that Doom!” The animations are fluid and smooth, but if I’m being 100 percent honest things do get a little “jerky” when dipping into and out of cover sometimes.

I played on an Xbox One S connected to a 4K TV, and while this isn’t a 4K gaming experience it still looked bloody brilliant.

Gameplay is exactly what series veterans would expect: challenging and satisfying on the lower levels, merciless at higher difficulties. Where this game excels compared to previous offerings is its accessibility to new players. You don’t have to play the first game or have any experience with shooters to enjoy hacking Nazis apart with a hatchet or shooting them in the face by the thousands.

On October 27, we ask you to become one of us. Watch the brand-new launch trailer for #Wolf2. pic.twitter.com/JwK1fVC9Ye

Controls are smooth thanks to a system that’s tried-and-true, there’s nothing to dislike. The menus are simple, but effective. Nothing feels out of place or tacked-on, and I never felt myself wishing for more in the way of bells or whistles. Wolfenstein II knows how to get the hell out of its own way and let me kill Nazis.

The over-the-top set pieces are a visceral combination of beautiful textures and Nazi imagery. It’s a decidedly strange trip, and I won’t spoil any of it with this review: but if you’re expecting “Duke Nukem” or some sort of tongue-in-cheek approach to things you’re going to be surprised.

Wolfenstein II is a game about humanity and heroes, it forces us to deal with some really mature shit. I don’t think I’ve ever been so affected by the opening cinematic sequences of a video game as I was by this one. It ripped at my heartstrings and had me ready to fight the evil empire.

The rest of the game, which takes about 20 or so hours if you’re not in a hurry, plays out in dramatic fashion. There was never a time during Wolfenstein II that I didn’t feel like applauding the developers’ decisions. This is a game that really goes for it; Machine Games isn’t fucking around here, it made a mature game for mature audiences that has a point to make.

That point is: the only good Nazi is a dead Nazi.

Wolfenstein II doesn’t just paint enemies with swastikas in order to create conflict. Firstly, the series has had Nazi enemies for decades, and secondly the plot is expertly cultivated in a story that’s good enough to stand on its own. You want to fight and destroy the evil characters in the game because they are so damn good at being bad.

The voice acting is superb, and leagues beyond Fallout 4 or Skyrim in terms of both script and talent. Early in the game you’ll encounter the main antagonist, Frau Engel, who is voiced by the magnificent Nina Franoszek in a performance that conjures the majesty of Jessica Lange from season 4 of “American Horror Story.” Frau Engel makes you want to kill her from the moment she walks on the screen and – well I won’t spoil that for you either.

I didn’t think Wolfenstein II would tell such a good story, and after playing it the only problem I can find is my boss not giving me the rest of the week off to play it. There’s replay value in making different decisions, including two different timelines — and I can’t wait to dive even deeper into the guns, progression, and lore.

Due to time constraints I didn’t get to check out both timelines, or play the game to completion on higher-difficulty levels, but my experience with it was fantastic and the time I spent playing Wolfenstein II was some of the most enjoyable (and satisfying) gaming I’ve done all year.

There’s a fair amount of replay value to be had and a story good enough to experience multiple times. The game has amazing graphics and – for my money – it’s the best single-player shooter experience of 2017.

More importantly, it’s the best story I’ve experienced in a game in years. Wolfenstein II’s tale was so good that it made killing Nazis the second best thing about the game – and that’s saying a lot.

Wolfenstein II is a helluva great game that scratches the “good versus evil” itch in a way only a game that lets you shoot Nazis can.

Read next: Amazon wants more of your trust than ever for its new delivery service