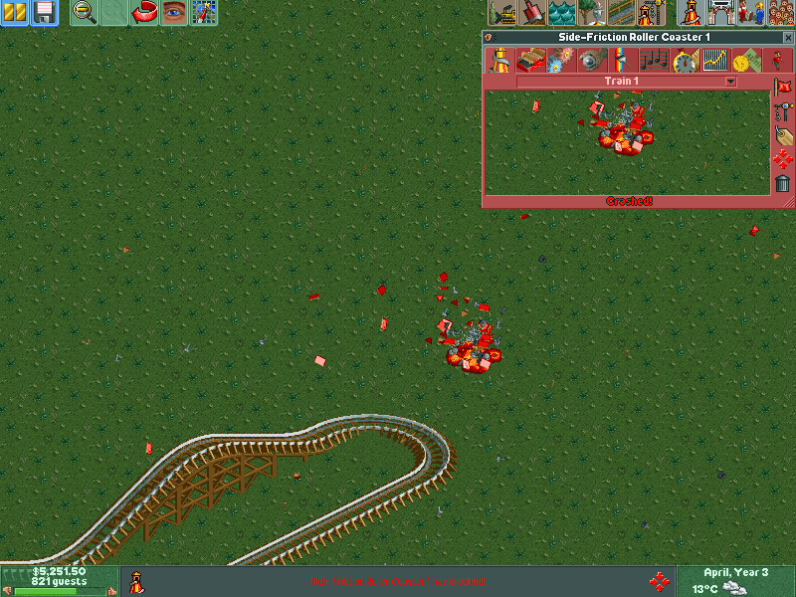 You shouldn’t immediately associate RollerCoaster Tycoon with the type of violent sadism you see in other gaming titles, like Grand Theft Auto and Manhunt. The sleepy, PG-friendly PC game sees the player create a theme park, with the ultimate goal to turn it into a financial success. This is largely done by building attractions and rides, while conservatively balancing a budget.

But bubbling under the surface is a darker side. Some degenerates (like myself, not gonna lie) play RollerCoaster Tycoon simply to exact unspeakable acts of violence against the milkshake-slurping, burger-chomping visitors to your creation.

My preferred tactic was to build a grandiose, winding rollercoaster, and ‘accidentally’ miss out a few blocks, causing visitors to catapult uncontrollably to their deaths at breakneck (literally) speeds. I think by doing this, I’ve ruined the day of more tourists than norovirus. It’s probably just as messy, too.

And in the world of RollerCoaster Tycoon, there’s no such thing as corporate manslaughter charges. The most likely repercussion is some bad word-of-mouth, resulting in some punters staying away. That’s something that can be solved with a hefty marketing budget and some new attractions.

And time. Time, after all, heals all.

Unsurprisingly, YouTube is filled with video compendiums showing all the creative ways park-goers can be killed. These merely scrape the surface of the cruelty that can be done on this iconic game.

This meanness doesn’t always manifest itself in crashes. One sick puppy created a rollercoaster that took 210 human-days (and 3,000 in-game years) to complete. The 8 Chan denizen who created it described it thusly:

“Gentlemen, I have done it. I have found a way to go slower than was ever thought possible.

You may remember from a few threads ago I made a vintage cars that used all the object data on the largest map possible – “The Wheel Of Life And Death”. The slowest ride with the longest possible track. at the time time i though this was the slowest you could go but I found a way to go slower.

With this in mind I build a spiral track on the biggest map. The train comes out of the station and hits breaks with slow it down to 4mph. then it travels along the track, always losing speed but never stopping, until it gets to the center. where it rolls back and does the spiral again until it gets back to the station. Calculations show that it would take 210 days to finish. not in game days. real life days.“

For those who want to give it a shot, RollerCoaster Tycoon: Classic just landed on Steam, making it easier than ever to relive this 1990’s monolith to human cruelty. The Classic edition includes the first two games in the series, is available on PC and MacOS, and costs $20.

Read next: Why Bitcoin and Ethereum will soon be everywhere (for reals)