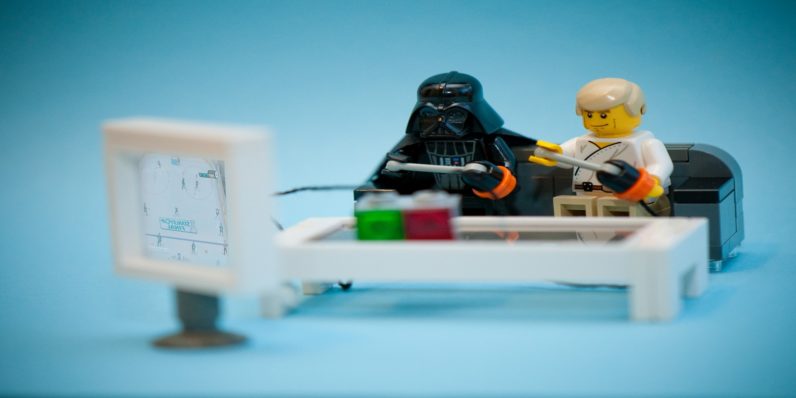 The reports of the death of local cooperative gaming have been greatly exaggerated. Developers at E3 showed off titles like A Way Out, Moonhunters, and Cuphead – all designed with offline co-op as their premise. There are numerous others coming as well.

Local co-op is making a comeback and I’m here to prepare you for the wonderful adventures you’re about to have with the person sitting next to you.

There are no greater moments in gaming than those you share with people you care about. My gaming history goes back pretty far, and I’ve always looked to the games that let me play with my friends and loved ones to fill my library.

Local co-op — also called couch co-op: playing a game sitting with someone in the same room — has been around since the early days of arcade. The O.G.s (original gamers) of yesteryear earned their co-op stripes in 1979, spinning out of control in Asteroids. I got my first taste of couch co-op in Konami’s side-scrolling shooter Contra, one of the original UUDDLRLRBA games.

Local co-op includes games from every genre and platform. In Divinity: Original Sin we see the formula used in a tactical RPG which works great on PC and consoles. The split-screen mode for Borderlands and its sequels works great — even on smaller TVs — thanks to the stylized graphics and excellent user interface. Moonhunters is a multiplayer personality test that you can play with your friends on PC; it’s coming to Xbox One this July.

The heart and soul of local co-op lies in the bonding experience. We don’t often get up and high-five each other in the middle of a really good movie. My girlfriend and I never pause a TV show to discuss how we’re going to deal with the fighting between Luscious and Cookie.

These things happen all the time when we play together in our living rooms. When we can cheer, and hug, and give each other some love – we aren’t just gaming together; we’re creating our own unique story together. No one else cares about how much fun you and your BFF had playing Dance Dance Revolution at two o’clock in the morning, but you and your friend won’t ever forget it.

If it seems like couch co-op, as a feature, doesn’t get the same respect from developers as online competitive play, that’s because it doesn’t. Even the biggest companies can be inconsistent with the way they treat couch co-op. The first four main games in the Halo series had it, then it was dropped for Halo 5. There’s no consensus that it should have had local co-op, but I can’t be the only person who passed on the shooter because I couldn’t play it with my player 2 sitting next to me.

These games matter, however, nostalgia is a great driver — many of us grew up gaming in arcades and our friend’s bedrooms before online multiplayer was available.

Developers don’t always get it right

Couch co-op features shouldn’t be added in as an afterthought (I’m looking at you, Call of Duty) just to drive up a feature list. Sure it’s nice that there’s a six-hour-long series of missions in Black Ops III that I can tackle with a buddy – but it feels like an aside, we’ll just go back to playing zombies (which is excellent for couch co-op).

The graphics don’t seem to matter. Lovers in A Dangerous Spacetime doesn’t look like a modern title, but it takes advantage of a cool idea: up to four local players can control different parts of a spaceship to work together towards victory. The interesting part is that the game is a different experience based on whether you have two, three, or four players.

There’s no formula or rules to making a good co-op title, Madden and NBA 2K both let players work together on the same team locally. NBA 2K17 featured a non-playable character (NPC) for its MyPlayer mode that was your character’s best buddy on and off the court. It would have been brilliant to be given the opportunity to tackle the career mode with a real life pal instead of just relying on the guy who played the titular character in Creed to provide you with a sense of immersion.

It’s about the people

What does make a couch co-op title special isn’t about what’s happening on the screen; it’s about who you’re experiencing it with. Playing Rock Band 4  (hands down my favorite co-op experience) with my friends at home is like being at a party, but playing cooperatively with players online doesn’t feel the same – I’m still doing shots by myself. Am I supposed to croak out Meatloaf’s Paradise by the Dashboard Light as a duet with a stranger? I think not!

Some games get it so right that they destroy arguments. The big ones like Borderlands and Diablo III – games that tell you to go kill bad guys together, get rich on loot, and have some laughs. Those are great for getting your significant other into video games they might not otherwise have the patience for.

There are small ones that change the nature of the genre. I played through Never Alone with my fiancee and we wanted to become honorary Inuits. It’s an educational series hiding inside a cute and clever cooperative platform game. I cringed every single time that little girl on the screen fell into the icy water and died. My fiancee let out a sad little sound whenever I’d get the fluffy white dog eaten by something wicked. We will never forget our time together in that video game.

Video games do more than just entertain us

The games that are great, the ones that stand the test of time, have a soul. World of Warcraft finds its soul within its player community. Massively Multiplayer Online games live and die by whether they can engage people from all over the world to keep logging in. Players get married in real life to people they met as characters in the games they play online.

The seminal open-world RPG Skyrim invites you crawl inside of it’s world, alone, like you’re reading a favorite book.

The soul of a local co-op game, however,  isn’t in the game itself; it is in the stories that only the players can create.

My Divinity story isn’t the one the developers and writers put in the game; it’s the one created between me and the people I played through it with. We laughed, we cried, we lived, and our characters died. Those memories last forever and they help to build on the relationships we already have in ways no other medium can.

The world has room for all gamer types. I don’t exclusively play local co-op; my ongoing love affair with competitive sports games like UFC2 and single-player RPGs like Fallout 4 keeps me playing a variety of games.

I do, however, keep a soft spot in my heart for games that remind me of the days when the only way I could play a video-game was by going to a friends house and getting in on some player-2 action or looking for quarters in the parking lot. Things have changed a lot, but I’m still playing games with the people I’m sitting next to.

Read next: Take better screenshots in macOS with these hidden features